Home » All Sections » WELL-TRAVELED: Yes, Rio really is that beautiful 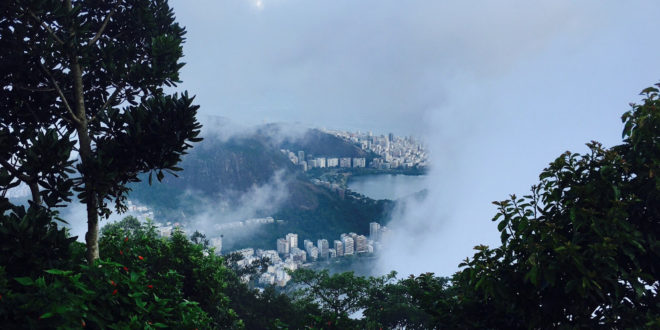 Clouds, fog and mist often shroud Corcovado Mountain, site of the Christ the Redeemer Statue. On a recent visit, hundreds of visitors applauded and cheered when the skies cleared and the statue was revealed.

Rio de Janeiro has been in the news for months leading up to the Olympic Games, and it hasn’t been good: the Zika virus, political unrest, ouster of the president, security issues, an uncertain economy and questions about the city’s readiness for the mega-event itself.

But I have good news: Despite the negative publicity (as warranted as it may be), Rio is a captivating travel destination and worth a journey to South America.

Television coverage of the Games will feature beauty shots of the iconic images of Rio: the beaches of Copacabana and Ipanema, Sugar Loaf Mountain and the Christ the Redeemer statue. These spectacular images will whet one’s appetite to experience in person the sights many have added to their travel bucket lists.

In March I visited Rio de Janeiro. Summer in the Southern Hemisphere was transitioning into autumn and the tropical heat was abating. It was a delightful time to visit, well before the world descended on the city for the Games of the XXXI Olympiad. Rio is vibrant and exciting even if there are no international sporting events or the world-famous Carnival to draw visitors.

Being allowed to enter Brazil is not the easiest task, however. A valid U.S. passport alone is not sufficient; a visa is required. A Brazilian visa must be obtained in advance from the Brazilian embassy or consulate nearest to where you live. Immigration officials will refuse entry if travelers do not possess a valid visa added to their passports. It can be a complicated and time-consuming business, so you should allow three to four weeks before your intended travel date.

Numerous passport and visa services can simplify the process. Of course, there is a fee for the service beyond the cost of the visa. There is an additional fee if you desire a rushed return. My companion and I used Generations Visa service. The company made the process much easier than if we had to do the legwork on our own.

Flying to Rio is a breeze. We drove to Miami, spent the day doing some sightseeing and then took an overnight flight on LATAM Brazil airlines. There was only a two-hour time difference (daylight saving time had not yet begun when we left), so we didn’t suffer jet lag and were ready to experience the city as soon as we touched down in the morning.

The international airport is about a 40-minute drive from Copacabana, the famed beach where our hotel was located. The journey is one of distinct contrasts between fabulous wealth and distressing poverty.

The highway snakes through breathtaking mountains and teeming slums. Called favelas, there are about 600 of these neighborhoods dotting the hills leading into the affluent beach areas of Rio. Many of the neighborhoods are walled off from direct view as visitors drive past. Breaks in the walls will show efforts by the government to address the slum conditions such as newly constructed schools and other institutions.

The residents of the favelas, known as moradores da favela, face the stigma of living in neighborhoods of extreme poverty. The favelas illustrate the stark reality of how unequally wealth is distributed in Brazil. The moradores have developed a distinct culture within the walls erected by the government.

The favela culture has received world attention for its music and art. As a result, tourists have become interested in the favelas. Several tour operators offer visits to Rio’s favelas, as “slum tourism” has become a niche market. Tours are said to bring attention to the conditions of the slums and the social and economic conditions that created them. Guides describe the evolution of the favelas, the organizations and civic institutions developed by the residents, the social stratification of the residents (long-time owners of houses and renters of spaces jerry-built atop existing spaces), and cultural and entertainment venues.

Our guide provided insight into the lives of the moradores as we toured the city, but we decided against taking a favela tour. The idea of slum tourism is morally unappealing to me.

Instead, we focused on the famous sights and saw them all.

Our hotel was right on the beach of Copacabana, and we had a breathtaking view from our windows. Strolling the beach, people watching and stopping for drinks, samba music and snacks at the various kiosks that line the famed beach walk never gets boring. Activity extends well after dark since the beaches are well illuminated.

Cariocas, or natives of Brazil, exude a distinct love of life that is intoxicating. That is helped along by the national cocktail caipirinha, an invigorating libation made with cachaca (a distilled spirit from sugarcane juice), sugar and lime. Sipping a caipirinha on the beach or at a café on the boulevard is a must.

Other must-dos are a cable car ride to the peak of Sugar Loaf mountain at sunset and a trip to the statue of Christ the Redeemer perched atop Corcovado Mountain.

Pao de Acucar, Sugar Loaf, is a 1,300-foot granite block at Baia de Guanabara. The views of the city and bay are spectacular. We ascended the mountain as part of a city tour, but tourists visit on their own.

An even more spectacular view is from the 2,300-foot Corcovado Mountain. Extremely popular, the Christ the Redeemer statue at the peak is the iconic Rio experience. Inclement weather, however, can mar the visit by limiting visibility and turning what could be a spectacular view of the city into a foggy, soggy mess.

We could see the statue from our hotel room. Before we departed, the statue was basking in the sun. By the time we arrived, it was shrouded in misty fog. Fortunately, the sky cleared for a few minutes, and we saw the stunning statue and enjoyed the world-famous view. The enjoyment is limited, however, by the hordes of tourists jamming the plaza at the foot of the statue. The wait to get down the mountain in a cogwheel train stretched to about an hour, but it was made pleasant by interesting conversations with friendly Brazilians.

Rio de Janeiro has always been one of the top cities on my list of 1,000 places I must see before I die. The reality of the city exceeded my imaginings. Visit if you can, but wait until after the Olympics. You will never have the place to yourself, but you will be able to experience the city as it is for millions of cariocas.