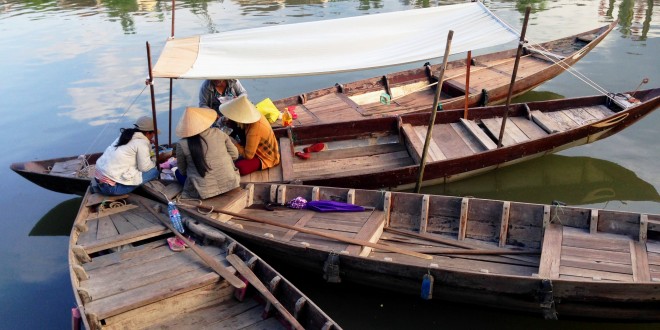 Vietnamese boatmen take a lunch break on the Perfume River, so named because blossoms from orchards upriver fall into the water, giving it a fragrant aroma.

Vietnam has surprises for even the most seasoned world traveler.

For those who have already “done” China and Thailand, this intriguing, beguiling and off-the-beaten-track destination offers an Asian traveling experience that transports Americans into a culture that differs starkly from our own. And for those who would be new to Asia, Vietnam welcomes visitors eagerly and warmly, yet provides a touch of the exotic and seductive. (See a photo gallery below this story.)

The nation, emerging from a reputation as a war zone for much of the 20th century, made the New York Times’ list of top places to visit in both 2014 and 2015. It is developing a substantial tourist infrastructure but has yet to become so popular that it is overrun with tourists. Visitors get the sense they are slipping into everyday life in Vietnam.

Tour buses are visible, and tour guides lead their groups around so they remain close together “like sticky rice,” but the museums, temples, pagodas, palaces and natural sites are not packed with sightseers, as one finds in other popular Asian destinations.

Travelers are able to wander streets and markets or move around by cyclos (bicycle carriages) and see people going through the routine activities of daily life. Westerners are visiting in greater numbers every year, but Vietnam is still an emerging destination for many, and this is good news for the traveler who chooses to visit now before the country becomes too popular. 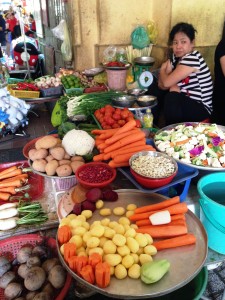 My travel companion and I visited Vietnam in May with an escorted tour group. It was one of the most enjoyable trips we have had. We experienced all three of the country’s regions, from bustling, modern Ho Chi Minh City (everybody still calls it Saigon) in the south to the imperial city of Hue and quaint town of Hoi An in the central area to intoxicating Ha Long Bay and the enchanting capital of Hanoi in the north.

We chose Vietnam for three reasons:

■ It has an intriguing history. My travel companion and I are baby boomers and history buffs. We were aware of the long struggle the country endured to shake off the yoke of French colonialism, the devastating and fruitless American efforts to stop communism and the eventual unification under Ho Chin Minh. Although Vietnam is one of only a few remaining Communist countries in the world, it rejected a command economic system in 1986 and embarked instead on a market-driven reform system that improved the quality of life by reducing poverty through land reform and establishing education and health services.

The imperial palaces and ancient temples and pagodas top the list of sights not to be missed, but locations marking the wars with the French and Americans, such as Dien Bien Phu, the site of the Vietnamese victory over the French in 1954, and the Cu Chi Tunnels, home to 16,000 resistance fighters during the war with America, are must-see attractions as well.

■ It has breathtaking landscapes. We traversed the nation from south near the Mekong Delta, with its rice fields that produce half of the nation’s rice, to the sparkling, emerald-green Halong Bay. The spectacular bay is dotted with 3,000 forest-covered limestone towers. A day or overnight cruise on the bay in traditional-styled boats is a must. When one thinks of Vietnam, it is often this picturesque bay that comes to mind. 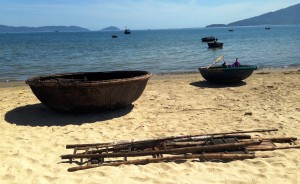 ■ It has extraordinary cuisine. Our American palates have been treated to Vietnamese cooking since 1975, when millions of refugees resettled in the United States. Many travelers come to Vietnam with the goal of sampling as many Vietnamese delicacies as possible. Restaurants, bistros, rice-and-noodle shops and street stalls are everywhere. Guidebooks offer well-considered suggestions. The cuisine is a fusion of Vietnamese, Chinese and French cooking.Ingredients are fresh and cooking techniques are simple. The presentation is subtle and the flavors are memorable. Pho, spring rolls, banh xeo (a crispy crepe) and bun cha (skewered pork with noodles) are Vietnamese specialties.

In addition to these reasons, a trip to Vietnam provides excellent value for the travel dollar. We booked with a travel company we have used before, Gate 1 Travel (gate1travel.com), which we have found to be reliable and of high quality. Our cost per person for Gate 1’s Classic Vietnam package, including airfare from Los Angeles, was $2,721 for 12 days. Our price included intra-country airfare; breakfast each day; four-star hotels in Ho Chi Minh City, Hoi An, Halong Bay and Hanoi; all sightseeing tours; three lunches; and two dinners. Other tour companies offer similar values.

For travelers seeking a unique and memorable experience that whisks them away to an exotic and enchanting locale, Vietnam should be at the top of their places to visit. It is a country that tantalizes the senses and remains in the heart and mind.