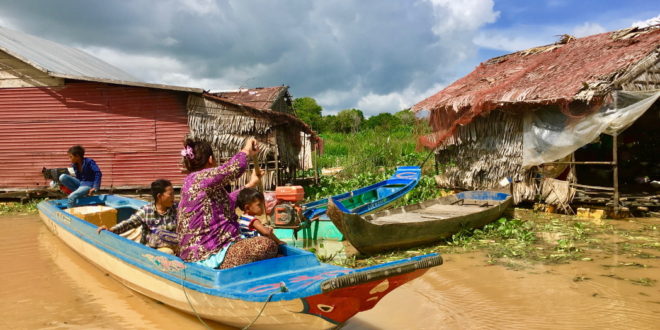 When the word “exotic” comes to mind, I immediately think of the Far East: ancient civilizations, Buddhist temples, spectacular ruins, tropical climes and intriguing, and often tragic, histories. I have traveled to Asia several times and have immersed myself in its varied landscapes, cuisine and cultures. Of all of the places I have visited, Southeast Asia keeps me coming back. Thailand, Laos, Myanmar and Vietnam each have their own charms and allure, but it is Cambodia that has stolen my heart.

My traveling companion, fellow Jacksonville University professor Therese O’Connell, and I recently spent a few weeks touring Southeast Asia. Ten days in Thailand with short jaunts into Myanmar and Laos were the main items on the itinerary, but the several days we spent in Cambodia turned out to be the highlight of an absorbing and enlightening journey.

It is the stunning Angkor Wat that most travelers think of when considering visiting Cambodia. And it is what drew us to this once-troubled but emerging nation. The magnificent temple complex is the symbol of Cambodia. It is emblazoned on the country’s flag and the signature attraction for visitors. This UNESCO World Heritage Site is the largest religious monument in the world.

The complex of temple ruins that make up the Angkor Archaeological Park encompasses 402 acres. Located in the northwest of the country, Angkor is near the bustling city of Siem Reap. One day is all we had in Angkor Wat, certainly not enough to fully experience the site, but enough to gain a lasting impression of it magnificence. We used our limited time wisely.

As part of a small group of nine travelers, we arrived early in the morning. Our scholarly guide explained to us that the temples were originally built in the 12th century by the Khmer Empire King Suryavaran II as a Hindu temple to worship the god Vishnu. By the end of the century, it evolved into a Buddhist temple, becoming the king’s state temple and eventual mausoleum.

There is much more to the archaeological park than the famed towers of the main temple complex. First, we visited Angkor Thom, the fortified royal city.

Standing amid the spectacular ruins, we imagined what it might have been like to live more than 800 years ago in a city that, at the height of the Khmer empire, was home to a million people. We wandered through the Elephants Terrace and Terrace of the Leper King, marveling at the beautifully preserved bas-reliefs. Later, we explored the highlight of Angkor Thom, the intriguing Bayon Temple with it 172 giant smiling stone faces.

We returned to the park in the afternoon for another visit to Angkor Wat and learned more about it from our guide. It is constructed as a classic temple-mountain that replicates the Hindu universe. He explained that its remarkable five towers represent the different peaks of Mount Meron. This is the home of the Hindu pantheon, the center of the universe. The walls around the temple represent mountain ranges at the end of the world, and the huge moat symbolizes the cosmic ocean. The temple is constructed of sandstone blocks. It is very accessible to visitors, and we were able to immerse ourselves in the experience by exploring the maze-like interior and climbing several of the towers.

The highlight of any visit is viewing Angkor Wat at sunset. As the sun began to retreat behind the clouds, we sat quietly along the moat taking in the beauty of what has been called one of the seven wonders of the world. I let my imagination take me back to the height of the empire and began to see Cambodia for what it once was. But thoughts of the country’s tragic past and unsteady present lingered.

The Cambodia of today has faced many challenges since the years of the empire. After the fall of Angkor in the 15th century to its neighbors in what is now Thailand, the country and its people have endured wars, protectorate status by the French, bombing by the United States during the Vietnam War, several political coups and a reign of terror and genocide by the Khmer Rouge. The Khmer Rouge was overthrown by the Vietnamese in 1979. Continual war engulfed the country. Under the 1991 Paris Peace Accords, the country was run briefly by the United Nations. In the ensuing years, more coups and corruption ravaged Cambodia.

Today, the country is controlled by the Cambodian People’s Party, and corruption is common. Elections were in progress during our visit. Electioneering in Cambodia is vigorous. Banners and loudspeakers appealing for votes are common. However, it remains to be seen if politics can improve the life of everyday Cambodians. The country faces widespread poverty, and its per capita income is low compared to other Southeast Asian nations.

However, increased tourism may be the way to lift the nation when politics fail. About two million tourists visited the country last year, and that number is increasing. Siem Reap, once a sleepy outpost, has become Cambodia’s second-largest city because of its proximity to Angkor Wat. Modern hotels line the main street, and new ones are sprouting up quickly.

There is much to experience in Cambodia beyond the memorable Angkor Wat.

We spent another day traveling in the countryside and got a sense of what life is like outside the cities. We journeyed by oxcart to several villages set among rice fields, banana plantations and lotus ponds. The oxcart is used daily by the farmers, and thanks to tourism it offers them a chance to make a little money by giving visitors a unique travel experience.

In the center of Cambodia is Tonle Sap, the largest natural freshwater lake in Southeast Asia. We took a riverboat out on the lake to visit the Chong Khneas floating villages. Houses, fish and crocodile farms, stores, clinics, gas stations and schools all float upon the muddy waters of the lake. The villagers seem to live self-sufficient and rewarding lives on the water. At one village, a lively birthday party for twin sons of a prominent resident was in progress. The party-goers arrived by boats dressed in their finest. Everyone waved to us as we passed, enjoying a special outing.

Cambodia may not be high on the list of must-see destinations for many travelers. It is not as developed and tourist-friendly as popular Thailand, but it is, to me, more charming and authentic. If one is looking for a destination that is still a bit off established travel bucket lists, Cambodia is the perfect place.

Our main destination of this Southeast Asia trip was Thailand. Cambodia was an extension to the main tour. But it became my favorite aspect of the trip. I will always remember Angkor Wat at sunset, the smiling and welcoming people, the verdant countryside and its exotic ambiance. I lost my heart to this place. I hope to return soon.

Dennis Stouse, coordinator of the Department of Communication at Jacksonville University and a writer and photographer, writes Well-Traveled, an occasional travel column for The Florida Times-Union. Contact him at dstouse@ju.edu.