Home » All Sections » WELL-TRAVELED: Seeing Florida through the eyes of a foreign tourist 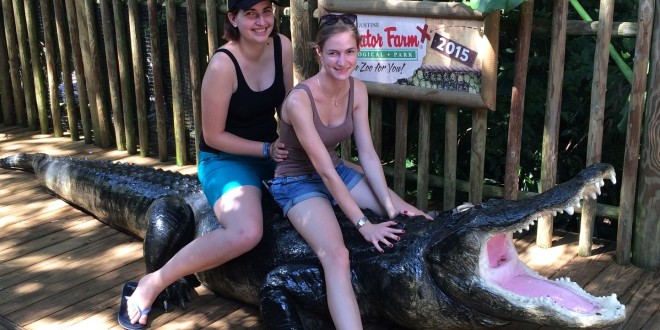 WELL-TRAVELED: Seeing Florida through the eyes of a foreign tourist

When traveling, I always try to see my destination less from the perspective of a typical tourist and more from a local enjoying what makes his or her hometown special.

Even when my language skills are limited in a country, I will talk to as many residents as possible and get their take on what to do and see during my visit. On a few special occasions, they have offered to show me around and have been impromptu tour guides. I am thrilled when this has happened, and these moments have created my most memorable travel experiences.

Living in Florida, a prime vacation destination, we may have the opportunity from time to time to create special moments for domestic and international visitors. I love being an informal tour guide. It gives me insight into the delights of our state that I have taken for granted, and it increases my appreciation of Florida.

I had an opportunity to host four visitors from Giessen, Germany, recently. Although they arrived in Jacksonville having already researched area attractions, the visitors were eager to let me suggest area destinations that locals treasure and would give travelers a sense of this city and region.

My visitors, Elke and Ralf Kuehnl and their daughter Beatrice, and Carla Harth, arrived in Jacksonville for a three-week stay after seven very full days in New York City. They experienced all of the major tourist musts in the city. But once in Florida, they wanted to get a sense of what it was like to live here. My goal was to show them the “real Florida” and experience Jacksonville on a personal level.

Surprisingly, the theme park mecca of Central Florida was not on their list of must-sees. Three of my visitors did the Disney/Universal/SeaWorld junket on a previous visit. They were of the “been there, done that” persuasion. This was Carla’s first visit to Florida as well as to the United States, but she was more interested in natural Florida than theme park Florida.

“If we wanted to go to Disneyland, we could just go to Paris,” Beatrice Kuehnl said. Harth added, “I was most impressed with the landscape around Jacksonville. I will remember the abundance of trees, the St. Johns River and the beaches the most.”

It is natural Florida that drew these German visitors. Prior to their visit, they said they wanted to see swamps, beaches, waterways and alligators. They also wanted to visit some of Jacksonville’s popular attractions. Working from this wish list, I created an itinerary showing off the beauty of North Florida and Coastal Georgia.

Top sites for the Germans were Cumberland Island, Okefenokee Swamp, the Jacksonville Zoo and St. Augustine with its Alligator Farm and historic section and lighthouse. They also were interested in the waterfront and visiting other downtown museums and the nearby neighborhoods of Five Points and Avondale.

“The ferry ride to the island was spectacular. It was wonderful spending the day walking the beaches, seeing the wild horses and the ruins of Dungeness.”

The marshes, mud flats and tidal creeks offer a contrast to the rolling hills and fields of her home in central Germany near Frankfurt.

“Of course, I love the weather here. It is so different from home.”

The Okefenokee Swamp was a favorite of Beatrice Kuehnl. The visitors hiked the trails and enjoyed a guided boat tour.

“It was an incredible experience to see alligators in the wild,” Kuehnl said.

This was Bea Kuehnl’s seventh visit to Florida. Her parents, Elke and Ralf, are relatives of Jacksonville retiree Elke Underwood and brought Bea to Jacksonville first when she was a toddler.

“We always enjoy the Jacksonville Zoo and, of course, the Alligator Farm in St. Augustine,” Kuehnl said.

In fact, during each visit, her parents take the same photo of Bea sitting atop a preserved Gomek, one of the largest crocs to live at the park.

“Jacksonville is a very beautiful city,” Harth said. “I will tell my family about the warm weather, the river and the palm trees.”

For her, the natural surroundings and climate were prime attractions.

“This area is nothing like what we are used to in Germany. I took hundreds of pictures to show my friends.”

Kuehnl and Harth are students at the University of Giessen. Both are planning to be teachers. Kuehnl studies math and sciences and Harth is majoring in languages.

The pair visited Jacksonville University and sat in on a course on speech communication. Both were impressed with how involved the students were in the class. They marveled at the beauty of the campus.

“At our university, the buildings are not in just one place. They are spread out all over the city,” Kuehnl noted.

The pair liked the parklike nature of the JU campus and its river location. They marveled at the new student residence halls and the other facilities for students on campus, including the football and soccer fields. Intercollegiate sports are not part of the German university experience.

In their three-week stay in Jacksonville, the Germans experienced life like Jacksonvillians. They were entertained by the performers at the Riverside Arts Market; shopped at the Chamblin bookstores, the St. Johns Town Center and River City Marketplace; strolled the streets of Fernandina Beach; and sunned on the beaches of Amelia Island.

They experienced what it is like being temporary Floridians by engaging in the activities of everyday Floridians. The Kuehnls and Harth enjoy cooking and baking and created several tasty meals for their hosts. This, of course, involved frequent visits to one of their favorite Florida destinations: Publix.

“We love Publix,” Kuehnl said. “It has everything we needed and the people there are so friendly.”

They even met a woman, now a Jacksonville resident, who was from Marburg, Germany.

“That is not far from Giessen. What a surprise to meet someone from there over here,” Harth said.

Jacksonville is off the tourist agenda for many Germans who yearly travel to Florida, but for these visitors, it is a destination they will recommend to their friends.

“At home, when we think of Florida, we picture Miami or Orlando,” Harth said. “But that is a very narrow impression.”

North Florida and South Georgia offered these travelers a slice of Florida life away from the tourist-clogged vacation destinations.

“The people are so nice and friendly here,” Kuehnl said. “I like to think of Jacksonville as my second hometown.”

Dennis Stouse, Professor of Communication at Jacksonville University and a writer and photographer, writes an occasional travel column for The Florida Times-Union’s Prime Time section. Contact him at dstouse@ju.edu.