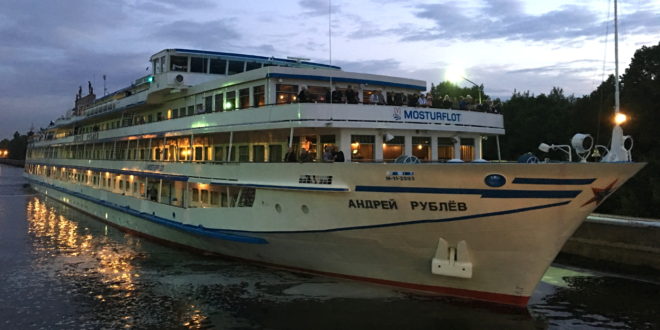 River cruising has become a popular travel option for many older Americans. The convenience, value and variety of destinations of river cruising attracts travelers seeking to experience a culture not from a train or rental car, but from one of the oldest modes of travel: a river boat.

Must-see locales in Europe and Asia have joined America’s inland waterways as desirable choices for the frequent cruiser desiring a change from giant ocean-going resorts to an intimate sailing adventure.

Sailing the historic rivers of Europe is what many Americans think of when river cruising. However, the Yangtze in China, the Mekong in Southeast Asia, the Irrawaddy in Myanmar and the Russian waterways are drawing visitors who are searching for destinations off the beaten track.

My travel companion and I have wanted to experience river cruising for several years. Having traveled extensively throughout Europe many times and visiting both China and Southeast Asia recently, we decided to sail the Russian waterways.

A river cruise would offer us the opportunity to explore eastern Russia beyond the major cities of Moscow and St. Petersburg. We also wanted a convenient, relaxing and stress-free vacation that a cruise provides.

We chose a 13-day tour featuring an 11-day cruise from Moscow north to St. Petersburg along the legendary Volga River, its canals and lakes. Our route took us into the heart of European Russia with stops in Uglich, Yaroslavl, Goritsy, Kizhi and Mandrogi.

We traveled with a Russian company, Vodohod Cruises, arranged by Gate 1 Travel, an American travel country we have used before. The total price for a single cabin, cruise and most excursions, including airfare from New York, was $3,500.

The cruise industry in Russia is developing, and not yet offering the variety of ships and accommodations one would find on the Rhine and Danube. The ships are multi-decked vessels, not the familiar long boats. They tend to be older with rather dated décor. The accommodations are modest but comfortable. The ships accommodate up to about 300 passengers.

Our ship was the MS Zosima Shashkov, a tourist class boat built in 1986 and refurbished in 2013. It was scrupulously clean and well maintained. The Shashkov has four decks with suites, singles, twins and quads. The air-conditioned cabins are smaller than what one would experience on a seagoing ship, but they are equipped with comfortable single beds, closets, large windows, adequate lighting, a refrigerator and a very small but functional ensuite bath.

Passenger comforts include a restaurant, a solarium, a piano bar, coffee bar, a nightclub, a sauna and promenade decks with outdoor seating. Much of the enjoyment of river cruising is watching the surrounding scenery from the decks.

Three full meals are served on board at set times. Breakfast is a buffet and open seating. Passengers are seated with the same diners at every multi-course lunch and dinner. Several different soups, appetizers, entrees and desserts are offered. Diners select their choices the next day at dinner. The portions are hearty and feature European dishes and Russian specialties.

Loads of on-board activities are offered by English-speaking staff. English, Russian and Italian were the official languages on board. A trio of Russian folklore musicians and singers provided regular entertainment at dinner and in the bar and nightclub. Entertaining classes in the Russian language, folklore crafts, Russian history, a culture and port lectures, vodka tasting and a Russian tea service were included.

About a third of the passengers on our trip were Americans. Gate 1 provided a tour manager and guide for its group. Other passengers were Italians, French and Russians. This helped create an international experience with a Russian flair.

The highlights of the experience were the ports of call. Three days were spent in Moscow with visits to Red Square, St. Basil’s Cathedral, the Kremlin and the famed GUM department store. We enjoyed a special excursion to the 16th-century Novodevichy Convent, a UNESCO World History site. It was a perfect amount of time to spend in the capital and introduced us to the history and culture of the country we were about to explore.

But it was the lure of the rivers and waterways that drew us. The ports of call took us into the heart of the country. We walked the streets of the historic city of Uglich and visited the Church of St. Dimitry-on-Blood that honors young Prince Dimitry, who hid in Uglich from the bloody reign of his father, Ivan the Terrible.

We wandered the massive open-air wooden Architectural Museum on the stunning island of Kizhi and were amazed by the collection of houses, windmills and churches. And we learned about handicrafts at the village of Mandrogi, a reconstructed traditional Russian settlement.

Three days in the captivating city of St. Petersburg concluded the cruise. It was our second time to St. Petersburg, but we revisited most of the must-see sights, including the fabulous Hermitage Museum, the Church of the Savior on Spilled Blood and the Palace Square.

We passed on Peterhoff Palace and Pushkin Palace, having enjoyed experiencing them on an earlier visit. We capped off our stay in St. Petersburg with visits to a Russian folk show and, of course, the ballet.

Russia is a fascinating destination. Exploring it through a guided river cruise is a comfortable and reasonably affordable way to visit one of the world’s most intriguing countries.