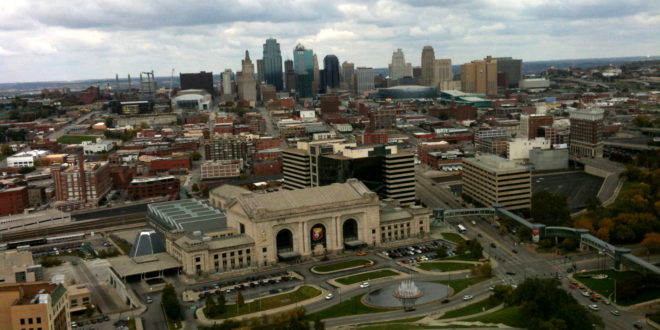 An open observation deck at the top of the Liberty Memorial tower offers an expansive view of the Kansas City skyline. All photos by Dennis Stouse.

Author Thomas Wolfe in his novel “You Can’t Go Home Again” suggests that once you have left the place in which you grew up, attempts to re-experience significant moments in your youth will be disappointing.

This summer, I ignored that admonishment and took a road trip back to Missouri where I was born, received my education and began my careers in journalism and higher education.

The highlight of the Midwest trip was a journey to Kansas City, my hometown.

In the 1950s and ‘60s, Kansas City was considered Missouri’s second city, overshadowed by its larger and older sister city on the eastern edge of the state, St. Louis. Today, Kansas City has come into its own as a destination for conventioneers and tourists. It is a dynamic metropolis that is home to 2015 World Series winner the Kansas City Royals.

In those days, Kansas City was considered a rather unsophisticated place in contrast to St. Louis. It was a city of stockyards, steaks, barbecue joints and jazz straddling the Missouri River. Many people unfamiliar with it thought the city was in Kansas, not Missouri, confusing it with its smaller neighbor of the same name on the Kansas side of the state line.  The annual American Royal Livestock Show and Rodeo and the Future Farmers of America conventions that brought thousands of visitors in boots and cowboy hats to the city reinforced a cowtown image.

But in the past 50 years, that image has changed dramatically.  It is now the largest city in Missouri and the hub of a metro area of more than two million people.

For many years, the fabulousness of KC was a well-kept secret – even though Kansas Citians reveled in the joys of their city such as the Spanish-style Country Club Plaza, wide boulevards, fountains, and its professional sports teams.

Now that secret is out.  When I returned to the city after being away for a number of years, I was pleasantly surprised at the changes.

Today’s visitors are drawn to its arts institutions, the stunning Kauffman Center for the Performing Arts, and the nationally respected Nelson-Atkins Museum of Art.

The Kauffman Center is home to the Kansas City Symphony, the Lyric Opera and the Kansas City Ballet. Designed by Moshe Safdie, the structure has become an iconic landmark for the city. It is a spectacular building and is adjacent to the Power and Light District, the Sprint Center and the Crossroads Arts District.

The Nelson-Atkins Museum of Art, known for its mix of neoclassical and modernist architecture, is located on acres of lawns overlooking Brush Creek in Midtown.  The museum features an extensive collection of Asian art and works of American artists such as George Bellows, George Caleb Bingham and Kansas City native Thomas Hart Benton. The Bloch Building is an addition that opened in 2005 housing the museum’s contemporary collection. It consists of three glass towers that bathe the interior spaces with natural light.

Faced with a declining downtown decades ago, the city embarked on a massive redevelopment project.  The Power and Light District anchors the downtown, a visitor-drawing attraction of the type that has so far eluded Jacksonville. It is full of restaurants, nightspots and entertainment venues. The city recently opened the first leg of a streetcar system that runs 2.2 miles from the River Market District through the downtown to the historic Union Station.

A visit to Kansas City is not complete without strolling the famed Country Club Plaza, known by natives as simply “The Plaza.”  Located on Brush Creek, it was the first shopping center in the world designed for visitors arriving by car. It opened in 1922 and now consists of 18 Spanish-themed buildings. It is home to many upscale shops and restaurants.

The 18th & Vine District is the historic center of African American culture. A style of music known as Kansas City Jazz was born in this district. Today, the neighborhood teems with restaurants, jazz clubs, the American Jazz Museum and the Negro Leagues Baseball Museum.

The Crown Center is one of my favorite spots in Kansas City. It is a shopping, office and residential development just south of downtown.  It is the global headquarters of Hallmark Cards, founded in Kansas City. The shops, restaurants and hotels draw convention-goers. Elevated enclosed pedestrian skyways link the Crown Center buildings.

Another attraction that draws visitors is the historic Union Station, located between downtown and the Crown Center. Opened in 1914, the station was designed in the Beaux-Arts style.  It was closed in 1985 when Amtrak moved its operations to a smaller facility.  It was reopened in 1999 and now houses restaurants, theaters, a planetarium and a science museum. Amtrak has since restored service to the station, and it is one of the most widely recognized structures in the city.

Soaring on a bluff above the station with inspiring views of the city skyline is the Liberty Memorial.  The 217-foot tall granite tower was designed in the Egyptian Revival style and dedicated in 1926.  The shaft resembles a burning pyre. Steam illuminated by red and orange lights creates the effect. As a boy, my father took my sister and me to the memorial several times.  It was a thrill to take the elevator to the open-air observation deck at the top of the tower.

The monument includes the engrossing National World War I Museum, which uses interactive exhibits to document what became known as the “Great War.”

This summer, I decided to go home again.  I returned as a visitor and enjoyed the delights of my hometown.  I rediscovered old haunts and encountered new places that have been developed since I left.  Kansas City was once an overlooked and underestimated outpost at the edge of the Great Plains.  Today it is a tourist mecca and the hub city of the central plains. It is worth a visit for those seeking sophistication and Midwest hospitality.