Home » All Sections » WELL-TRAVELED: From Chicago to Detroit, it’s a classic vacation by car 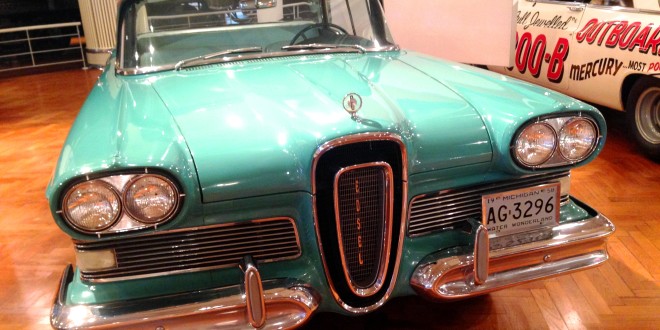 A Ford Edsel is one of the cars on exhibit at the Henry Ford Museum in Dearborn, Mich.

WELL-TRAVELED: From Chicago to Detroit, it’s a classic vacation by car

For many baby boomers, the quintessential summer vacation was the family road trip. But those who observe American cultural changes have noticed the decline of the family car vacation.

Many of us remember being loaded in the station wagon with our route marked in red on the Rand McNally map. One year it may be off to the seashore; another to the mountains; and still another to Washington, D.C., or a national park. Wherever, we always ended up in a cool place, but getting there was part of the fun.

However, for today’s family, it seems it’s the destination, not the journey, that is the focus — with a Florida theme park being a top choice.

But let’s not write off the road trip as an anachronism just yet. In early August, I embarked on a three-day road trip from Chicago to Detroit and encountered many families still enjoying the lure of the open road and many attractions on the way.

My travel companion, a retired music professor, and I began in Naperville, Ill., a Chicago suburb, and journeyed across northern Indiana and southern Michigan to the Motor City. At rest stops, restaurants and motels, we saw families enjoying Lake Michigan beaches, wineries, small towns, museums and other points of interest.

Our route included a mix of interstate highways and back roads. The environs of the Windy City gave way to the industrial sprawl of Hammond and Gary. Our trek turned north to the gorgeous Indiana Dunes National Lakeshore. Once into Michigan, we headed due east to wine country.

There are a dozen wineries near Battle Creek, Mich., aka Cereal City. We chose St. Julian Winery in Paw Paw. The wine-tasting was fun and informative. We left with a case of fine Michigan wine.

We stopped by in nearby Battle Creek, the world headquarters for the Kellogg Co., looking for reminders of the famed Battle Creek Sanitarium, an early 20th-century health clinic based on vegetarian health principles promoted by the Seventh Day Adventist Church and John Kellogg. It was the focus of a novel and a film, “The Road to Wellville,” and closed in the 1940s.

The beautiful Renaissance-style tower is now a federal office building. Sadly, there is no museum that commemorates this intriguing bit of American history.

We enjoyed lunch at another bit of Americana that is disappearing from the landscape: an original Big Boy restaurant. Once a popular national chain of roadside eateries, Big Boys are now limited to 88 locations in Michigan, a handful in California, Ohio, Illinois and North Dakota and, surprisingly, 281 in Japan. I devoured a Classic Big Boy burger with fries, and savored the memories.

The quintessential college town of Ann Arbor and the University of Michigan was our next stop. We strolled the vibrant downtown and popped into independent bookstores and other shops. One of my favorites was Cherry Republic, which is all about that delectable fruit. I stocked up on cherry preserves, cherry butter and dried cherries.

Our final destination was Detroit. Why Detroit? The city has gotten the rap as a rusted industrial metropolis in decline. But Detroit today is on the rebound and worth a visit. Landmark buildings are being restored, the riverfront is under revitalization and downtown has become an entertainment destination.

The DIA is an outstanding art museum, but it is the Rivera masterpiece that is the main draw. The iconic Mexican muralist created the massive 27-panel fresco from April 1932 to March 1933. It is a tribute to the city’s manufacturing heritage and labor force. We spent an enlightening hour with a well-informed docent who led us panel by panel through the spectacular work.

We ended our road trip with a journey back in time. The Henry Ford, as it’s called, is considered by Conde Nast Traveler to be one of the country’s best museums.

It is a complex of attractions set amid a splendid 200-acre park. The museum exhibits automobiles, railroad equipment, vintage aircraft, agricultural equipment, home furnishings from 1670 to the present and manufacturing innovations.

The exhibits evoked memories of our childhood. One exhibit, “Driving America,” was a favorite. Not only did it include the largest collection of automobiles we had seen, it also focused on the road trip experience, complete with a circa-1970s Holiday Inn motel room.

Another major attraction at the Henry Ford is Greenfield Village, largest and one of the oldest outdoor living history museums in America. Henry Ford collected “the history of our people as written into things their hands made and used,” and the village includes buildings from the 1600s to the present.

Highlights include a replica of Thomas Edison’s Menlo Park, N.J., laboratory and the Wright Brothers’ bicycle shop moved from Ohio. Interpreters dressed in period clothing provide demonstrations and perform short presentations that bring history to life. Antique autos, buses and other vehicles take visitors on jaunts through the village.

This road trip to “Pure Michigan” was a nostalgia journey for us. It bought back memories of cross-country trips with our families. It was good for the soul. Jump in your car and take to the open road.