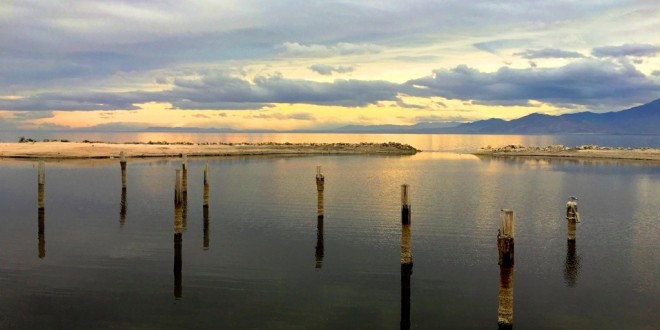 Pilings are all that is left of an abandoned yacht club along California's Salton Sea. Photos by JU Prof. Dennis Stouse

It is a massive inland sea in the middle of a Southern California desert. Ruins of forgotten motels, yacht clubs, restaurants and cocktail lounges dot the beaches. Isolated and sparsely populated communities of wrecked and dilapidated houses and mobile homes hug the brackish shorelines. Oh, and did I mention? It stinks.

Thousands of dead fish sometimes wash up on beaches that are a mixture of desert sand and crushed fish bones. The decaying fish and frequent algae blooms create an odor that can be almost unbearable on hot summer days.

Yet despite what seem to be major reasons not to visit the Salton Sea, the largest lake in California, it is re-emerging as a tourist destination after a heyday in the 1960s as the go-to desert for fishermen, boaters, swimmers and water skiers. (See photo gallery below.)

For those travelers looking for an offbeat destination that differs dramatically from the more notable attractions in the Golden State, the Salton Sea is an opportunity to experience stunning desert vistas juxtaposed with a post-apocalyptic-like landscape of the abandoned, neglected and forgotten. It is an intriguing spot that emerged by accident, was promoted and developed as the next glamorous desert oasis, declined due to agricultural runoff and governmental indifference, and now faces an uncertain future.

On a recent visit to Palm Springs, my companions and I took a day trip into the agricultural Imperial Valley and circumnavigated the entire Salton Sea.

I have been fascinated by the Salton Sea since my youth. I spent summer vacations visiting relatives in Los Angeles during the 1950s and 1960s. My aunt sold real estate at Salton during its golden years of rapid development and unrelenting hype. Salton Sea was promoted as “paradise in the desert.” It was viewed by potential residents as a working man’s Palm Springs, an affordable place in the sun on the beaches of an immense shimmering lake.

Promotional films of the time called it “America’s next desert playground.” At one time, the Salton Sea attracted Hollywood celebrities who added star power and glamour to the newly built yacht clubs and restaurants.

Later, I learned about the the Salton Sea’s uniqueness and weirdness from a documentary narrated by filmmaker John Waters, “Plagues & Pleasures on the Salton Sea,” and from a 2006 episode on the History Channel’s series “Engineering Disasters” and the 2002 Val Kilmer film “The Salton Sea.”

The Salton Sea is just as mesmerizing as I thought it would be. I entered the area on Route 111 southeast out of Palm Springs. Although the distance is less than 50 miles, the Salton Sea is worlds apart from this green and manicured resort.

At the northeast end of the sea, just outside of the intriguingly named town of Mecca, is the Salton Sea State Recreation Area. It is a well-maintained state park with overnight camping facilities, boat ramps, picnic areas, beaches, fishing and wildlife viewing. Despite the brackishness of the water and the odor, numerous RVs and camping trailers were parked along the shore. I didn’t notice anyone swimming and boating, but it was a rather cool and bleak December day. The visitors we encountered that day were not campers; they were folks like me, more interested in experiencing its weirdness rather than taking part in lake recreation.

Weirdness is the main attraction of Bombay Beach, a ragtag community farther south on the east side of the sea. It has been called “the most famously depressing place in California; the poster child for the post-apocalypse” by writer Ransom Riggs.

People come to see the devastation.

The 10-by-10 block collection of small houses and mobile homes has a population of around 300 but appears barely inhabited. Ruined houses and abandoned trailers line barely paved, treeless roads. It also has the distinction of being at the southern end of the San Andreas Fault. An occasional visitor wanders the roads, exploring the remains of homes left by their occupants. In my visit, I did not see a single resident. It was eerie but captivating.

Bombay Beach was once a promising community on the water’s edge, but floods have buried much of the town in mud. Now it is an oddity; a freak of a town used as a location for films about earthquakes or music videos, or for inspiring the video game “Grand Theft Auto V.”

Farther south along the lake is another location that attracts visitors seeking the weird and unique. Slab City, or the Slabs, is a makeshift campground on the concrete slabs left over from an abandoned Marine Corps barracks from World War II. “Snowbirds” and some permanent residents make their home in ramshackle structures and RVs.

It is completely off-the-grid. There is no electricity, no running water, no sewers, no toilets and no trash pickup. People are attracted to a counter-culture atmosphere of an earlier era.

Nearby, just outside the town of Niland, is a manmade attraction that draws visitors seeking the offbeat yet inspirational. Salvation Mountain is a hill about three stories high rising out of the bleak desert landscape. Made of adobe and straw, it is covered in thousands of gallons of lead-free paint. It consists of murals, Christian sayings and Bible verses painted in bright, primary colors.

Salvation Mountain has been described as a visionary environment and designated by the Folk Art Society of America as “a folk art site worthy of preservation and protection.” It was built by the late Leonard Knight. Visitors can “follow the yellow brick trail” up the hill and into grotto-like rooms within the hill.

We climbed the hill, read the inscriptions and wandered through the vividly colored rooms. Salvation Mountain was featured in Sean Penn’s 2007 film “Into the Wild.” In the film about Christopher McCandless’ journeys, the young man met Leonard Knight, who appears as himself.

The Salton Sea obviously has an offbeat and strange allure, but it is also a place of stunning beauty and serenity. The sea is beautiful, set in the desert between mountains — although today it attracts more birds than resort-goers.

At the extreme southern shore of the lake is the Sonny Bono Salton Sea National Wildlife Refuge, named for the late entertainer and congressman. Bono championed the Salton Sea and headed efforts to halt its deterioration. More than 800 acres of wetlands are set aside, with a variety of waterfowl, marsh and shorebirds. It is a birdwatcher’s paradise, with about 400 types of birds recorded at the refuge.

The Salton Sea is a place of contrasts. It is a destination known for its natural beauty but also as a future ecological disaster. It attracts people seeking an individualistic lifestyle; those looking for beauty in the desert; and others wanting to experience the unusual, offbeat and bizarre. It is definitely worth a day trip from the glitz and glamour of Palm Springs.

Dennis Stouse, Professor of Communication at Jacksonville University and a writer and photographer, writes an occasional travel column for The Florida Times-Union’s Prime Time section. Contact him at dstouse@ju.edu.