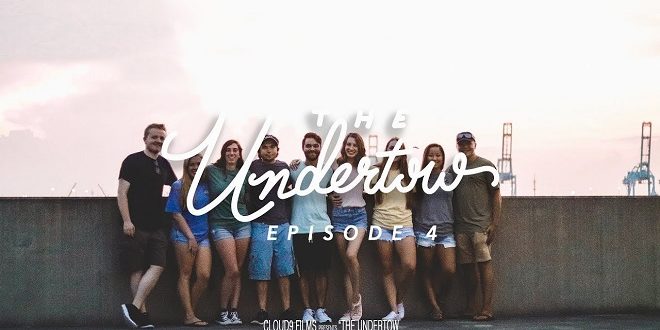 Visit JU's YouTube channel for the latest episode of The Undertow.

A new collaboration between WAVE Magazine and student-led campus publications, including The Navigator and The Aquarian, WAVE+ features articles written by and about Jacksonville University students.

Tides, they are a-changing. Or, at least, they’re progressing.

Today, more industries are trying to stay relevant with the youthful culture present in society. One such market where this is especially important is colleges.

This is the challenge Jacksonville University’s admissions department wanted to address when “The Undertow” was conceived.

“The Undertow” is a blog that comes out once a week and is produced by film and animation student Michael Csorba.

“It was constructed with the idea of having student life portrayed in a new light,” Csorba says. “I’m a tour guide and student ambassador and I wanted to be sure that we showed things we don’t get to show on tours.”

Kristen Kirkendall, communications coordinator for admissions, says that the department wanted to create something to reach students.

“One of the things we’re constantly trying to do with our admissions efforts is communicate with students on their terms,” she says. “A lot of the time, that means authentic, real content and usually, they prefer it when it’s student generated.”

With this in mind, Csorba began working on “The Undertow.”

“She came up with the idea that she wanted to do a video series about student life on campus and I decided to turn it into a blog series,” says Csorba.

The blog is intended to reach not only potential students, but also current students. Kirkendall says that once the vision was in mind, Csorba was able to largely take over the project.

“When we started talking about it, he told me that he was more passionate about the current student body,” she says. “He wanted it to appeal to future students, but really, he wanted it to help current students and freshman who maybe haven’t found their fit yet to understand what there is to do in Jacksonville and at Jacksonville University. So, we just kind of ran with that idea and a lot of it is just him.”

“One of the things we’re constantly trying to do with our admissions efforts is communicate with students on their terms.”

Kirkendall says that the admissions department mostly helps Csorba with promotional aspects. These promotional tools include social media and emails to prospective students.

“We do a lot more of helping him market the product than we do the actual creation,” she says. “We were really involved in the planning stages and now we’re really the push-out.”

Sawyer Kratzer, Csorba’s roommate, has been featured in several of the blogs.

“Nothing is scripted at all,” Kratzer says. “It’s just what we do in our daily life, from playing cornhole in our apartment to going out and doing things at the Town Center or going to football games.”

In the future, Kirkendall hopes to include a more diverse group of students from the JU population.

“He brainstormed doing takeovers, like Instagram takeover days, but a blog takeover day,” she says. “That way, you can see different friends and different people on campus. So, I think that’s a major goal we’re working towards is getting that diversity of the student body.”

Those involved with “The Undertow” also hope to gain more Instagram followers to make the links to the blog permanent.

“As far as the Undertow goes, I think he’s doing a great job,” says Kirkendall. “He’s off to a great start.”

Dolphin Media is the student news site of Jacksonville University featuring all the latest news and student polls from The Navigator, a student-centric on-campus publication serving JU since 1957, and from Dolphin Radio and the Dolphin Channel. Students may visit Dolphin Media online to submit articles or photography. For additional comments or questions, contact The Navigator staff.