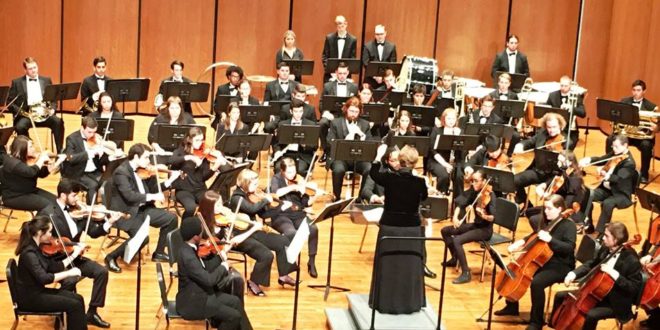 Just three days shy of Giorno della Liberazione – Italian Liberation Day — the Jacksonville University Orchestra finishes up the 2016-17 season April 22 with a free evening of music for the community featuring an Italian flare.

The program, called “Italian Night at the Symphony,” will include music from three different composers, each with a different take on the flavor of Italy.

Opening the concert is Hector Berlioz’ festive Roman Carnival Overture, which draws themes from the carnival scene in his opera Benvenuto Cellini. Though a French composer, Berlioz captures the spirit and excitement of Rome and Italian culture.

Felix Mendelssohn’s Symphony No. 4, “The Italian,” composed between 1829 and 1833, was based on impressions from his European travels, and in particular the time he spent in Italy. Mendelssohn himself referred to it as “the jolliest piece I have ever done.”

Capping the program is the monumental Pines of Rome by Ottorino Respighi, the only true “Italian” composer on the program. Respighi’s music describes Rome’s beautiful pine trees throughout The Eternal City. From a musical depiction of children playing near the Villa Borghese to the portrait of the tree-lined Appian Way, a military road used by the Roman Republic, Respighi captures the majesty and grandeur of Rome.

Preparing for this program was especially rewarding for the student musicians in the ensemble. In addition to rehearsals with conductor and Associate Professor of Strings Dr. Marguerite Richardson, the students enjoyed a memorable evening working with British conductor Tom Newall, Music Director of the Piccadilly Symphony Orchestra of Manchester, United Kingdom.

“It was interesting seeing a British conductor working with JU students on these Italian works,” said Dr. Richardson, who recently returned from her international conducting debut with the PSO. “The Piccadilly Symphony members are accustomed to performing repertoire like this with only five rehearsals over three days, so the atmosphere in rehearsal is electric … so much energy.”

This program also offers students in the orchestra opportunities to be heard as individuals as well as in the group.

Trumpet student Sam Hazen will leave the stage during the Respighi and perform a solo from outside the concert hall.

“Playing a solo gives you a chance to shine as an individual within the orchestra,” he said.

The program also gives students a chance to broaden their skills. Oboe and English horn player Erica Baker explains: “Working on the English Horn solo in Roman Carnival Overture has been a challenging yet rewarding experience. I have not dedicated much time to playing English horn in the past, so learning this solo has opened up a newfound appreciation for the instrument and Berlioz’s beautiful music.”

Of the sunny Mendelssohn symphony, concertmaster Edward Latimer says, ”The symphony is so full of excitement and energy that it’s hard to tell whether we’re bringing life to the music, or the music is bringing life to us.”