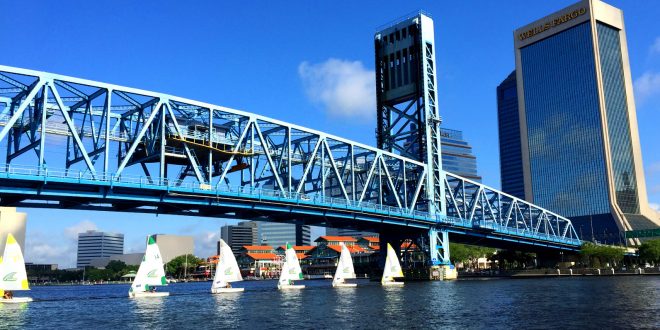 Jon Faudree is a man of his word — and his predictions.

Asked in 2012 what he planned to accomplish when he took the helm as the JU Varsity Sailing Team’s inaugural head coach, he had this to say:

“To bring the JU Sailing Team to a nationally recognized level and attract sailors and students from around the country and the world to compete at the highest level of this sport.”

A little more than 3 1/2 years later and his team is speeding along, faster than the wind.

Three out of its first four years, it has earned a bid to the Inter-Collegiate Sailing Association National Championships – as it did again this year. And now it is building on its short history by making even more history: its Women’s team has for the first time gained a spot in the ICSA Women’s National Championship, which is being held along with the Team and Co-ed national title contests May 24-June 3 in San Diego.

“This is a huge step forward for our Women’s team and solidifies Jacksonville Sailing as a whole nationwide, having both our Co-Ed and Women’s teams competing on the national stage,” Faudree said. “We are looking forward to cementing our spot as one of the very best teams in the country in the next couple years.”

The coach praised JU and Jacksonville for backing the team, both at home and as it travels nearly 14,000 miles each year.

“I’ve never seen a University and community more supportive of a sailing team; from the President and Board of Trustee’s to the faculty and students, as well as the local sailing and yacht clubs,” he said. “Being at a small University, we have been able to become part of the large family here and build relationships in all areas of the campus. The community here recognizes the high-quality student athletes we are attracting from all over the country and world.” 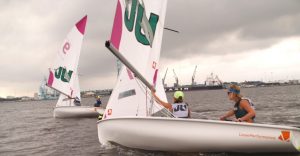 As Jacksonville University alumna Mara Strobel-Lanka wrote in Scuttlebutt Sailing News, one of the most popular sources on the web for North American college sailing, the task of the Women’s team now is to “prepare to compete alongside 35 teams of the best women sailors in the country, and revel in the victories already won. However challenging the National Championship in San Diego may be for these young women, they have a historic feat to be proud of on a team that is rapidly gaining momentum.”

Meanwhile, the Co-ed team recently qualified for the third time in four years for the National Championships at its conference contest at Eckerd College in St. Petersburg. Through a series of five regattas throughout the spring season, 12 teams earned the right to compete in the conference championships. There the top five qualified for the National Championships to compete against 35 other teams that qualify out of the 260 throughout the country.

The Co-ed National Championships start May 31 in San Diego, while the Women’s regatta begins eight days earlier – and that has significantly raised the team’s costs, Faudree noted.

“Originally, we only budgeted for the Co-Ed Championships thinking that the competition was just too difficult at this point in our Women’s team’s development, but the Lady Fins results proved everyone wrong.”

Help is needed to get the teams to San Diego, as well as for summer recruiting, he said. Tax-deductible donations can be made at https://mydolphin.ju.edu/sailing-donation.