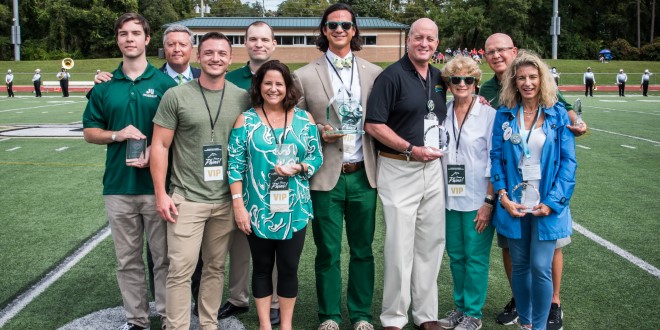 Jacksonville University will honor seven alumni with different professional backgrounds who have one important characteristic in common: Service.

“These individuals demonstrate the highest level of character in their professional accomplishments, community and philanthropic efforts and continued support of this University,” said Scott Bacon, Senior Vice President. “We are delighted to welcome them into our prestigious circle of Alumni of Distinction.”

President Tim Cost ’81 will introduce the honorees during halftime of the Homecoming & Family Weekend football game on Saturday, Oct. 19.

This year, the University will present a posthumous Distinguished Alumni Award of Excellence to the late George Hodges Jr. ‘64 who envisioned and paved the way for much of the highway infrastructure involving J. Turner Butler Boulevard and its surrounding roadways.

“Mr. Hodges’ 55-year commitment to his alma mater, betterment of the Arlington and greater Jacksonville area and practice of service, leadership, honesty and integrity demonstrate the character of our distinguished Jacksonville University alumni,” says Mr. Bacon.

Award winners are nominated by their peers. They are Jacksonville University graduates demonstrating significant professional accomplishments, community and philanthropic engagement and continued support of their alma mater.

George Hodges Jr., who passed away earlier this year, spent much of his professional career in the engineering and construction firm, Duval Engineering & Contracting, founded by his father and former University Board of Trustees member, George Hodges Sr., and Alexander Brest. In that position, Mr. Hodges Jr. envisioned the design, permitting, construction and dedication of Abess and Ashley Melisse boulevards, Matthew Unger Drive and most of Kernan Boulevard at no charge to the City. His effort ensured that almost 3,000 acres south of Butler Boulevard will remain largely undeveloped green space. In addition to his support for the University, Mr. Hodges Jr. provided philanthropic support to Mayo Clinic, The Bolles School, Children’s Home Society, Hodges Boulevard Presbyterian Church, and the University of North Florida. He was named to the UNF Athletics Department Hall of Fame in 2016 for his contribution and development of the Hodges Track & Field Stadium and its Browning Rehab Center.

Jan Alexander Maisch is the current International Vice President of Collegiate Membership for Alpha Delta Pi. She has served as social advisor, chapter advisor, and province director with the University’s Alpha Delta Pi Sorority and has held many posts with the Jacksonville Alumnae Panhellenic Association. She is a member of Green Key, Omicron Delta Kappa, Rho Lambda and Jacksonville University Friends of the Library. Jan is also involved with the Jacksonville Symphony, Beaches Episcopal School, Plantation Garden Club and Ronald McDonald House. Ms. Maisch is a former partner at Inlet Sunrise and Hub City Florida, Inc.

Bob Maisch, the husband of Jan Maisch, is a former Dolphin baseball player, who was instrumental in transforming John Sessions Stadium into one of the top facilities in the Atlantic Sun Conference. Mr. Maisch is the past president of Simplified Logistics, which he found in 2002 and sold in 2017. INC Magazine recognized the firm as one of the fastest-growing privately held companies in the country. Mr. Maisch had previously founded Hub City Florida Terminals after spending time as director of intermodal marketing with CSX.

Mike Santarone recently became Chief Executive Officer of international design, engineering, and construction firm Stellar. He is co-chair of the University’s Engineering School Advisory Board. He helped establish the Stellar Foundation, which assists civic and community service programs that encourage volunteerism and enhance the effectiveness of the non-profit sector, address community needs, promote leadership, and support diversity in the workforce and society. He also is involved with St. Patrick’s Episcopal Church, Sulzbacher Center for the Homeless, University of Florida, and Flagler College.

Matthew Chang is a professional engineer with expertise in manufacturing facilities, autonomous vehicle networks, and e-commerce. He is a former Davis College of Business Top 40 student and has served on the advisory board of the Career Resource Center since 2017. He is the founder of Tent Makers Ministry, which helps equip full-time ministers to plan, start and run their own business. He is also on staff with Eleven22 Ministries, robotics coach at Matthew Gilbert Middle School, mentor with ACE mentoring for Duval County Schools, and short-term missionary for OKOA Orphanage in Uganda.

Rear Adm. Michael Boyle currently commands the US Navy’s Carrier Strike Group Twelve. He received his commission through the University Naval Reserve Officer Training Corps (NROTC) program. He was designated a naval aviator in January 1990 and served in Iraq, Bosnia-Herzegovina, and Kosovo aboard the carriers USS Forrestal, USS Saratoga and USS Theodore Roosevelt. His on-shore assignments included time as an instructor pilot and staff officer with the US Pacific Fleet, US Central command, and at the Pentagon. He completed command and operational assignments aboard the USS John F. Kennedy, USS Nimitz, and USS George Washington. He was also commander of US Navy Region Korea, US Naval Forces Korea and Naval Component, US Forces Korea and United Nations Command.

Lt. Col. Henry “Hank” Griffin Van Winkle died of injuries he sustained during an airborne training accident in February 1998 in the Arabian Gulf while he served as executive officer of a Marine Corps aviation squadron. He had previously served as a flight instructor at Naval Air Station Cecil Field. Lt. Col. Van Winkle was a beloved brother of Pi Kappa Phi fraternity, who collected funds to purchase a brick at the President’s House in his memory.

For complete lists of previous award recipients, visit the Jacksonville University Office of Alumni Programs online. Framed photographs of all winners reside in the River House.