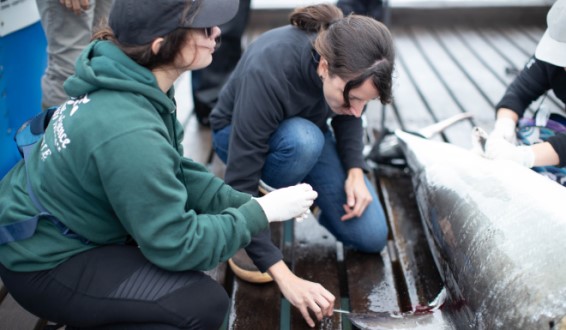 The M/V OCEARCH vessel will search the Northwest Atlantic Shared Foraging Area (NASFA) to advance understanding of health, reproduction, and migratory patterns for North Atlantic White Sharks during the group’s 37th expedition, which will launch from Brunswick, Ga., on Jan. 25. Recent data from the OCEARCH Tracker indicates a large concentration of white sharks currently gathered in the NASFA.

“I’m particularly interested in capturing and tagging animals in the region as they can help us understand not just movements during the winter months but also their migratory patterns and movements during other parts of the year,” Dr. Franks says. “It was a shark caught in South Carolina in winter/early spring, Hilton, who migrated to Canada for two summers in a row leading to successful expeditions to Nova Scotia in 2018 and 2019 and showing the importance of the waters off Atlantic Canada as a summer habitat for the population.”

Unlike previous expeditions, the current trip will spend more time farther off-shore, according to OCEARCH researchers. They are hoping to tag at least five more sharks, which would bring the tagged shark population to 60. Researchers are also hoping to capture an ultrasound of a pregnant great white shark.

OCEARCH is a data-centric organization that helps scientists collect previously unattainable data in the ocean. Its mission is “to accelerate the ocean’s return to balance and abundance through fearless innovations in scientific research, education, outreach and policy using unique collaborations of individuals and organizations in the US and abroad.”

Jacksonville University and OCEARCH partner to foster and promote unique opportunities for student-centric learning and meaningful scientific research. This partnership is grounded in shared values and a shared emphasis on scientific inquiry, collaborative research, experiential learning, innovation and sustainability.

OCEARCH has held previous expeditions in the NASFA and has tagged white sharks Miss May, Lydia, Hilton, and Savannah in this region. During the 2019 expedition to NASFA in which Dr. Franks served as chief scientist, 25 principal investigators representing 17 institutions engaged in 17 different projects.

“It was a super-productive trip with unbelievable integration of the outreach and the communities getting involved,” said Chris Fischer, OCEARCH founder and Jacksonville University explorer-in-residence. “It feels like a transformational trip on so many levels.”

Before launching the current expedition, OCEARCH will conduct a series of outreach programs, including ship tours and STEM teacher workshops, on Jan. 23-24 in Brunswick.

“The ship has been docked in Brunswick for quite a few years now, and this is our opportunity to give back to the community,” Ms. LoBuglio says. “We have a lot of things we’re doing to say “thank you” to the community for supporting us.”

In addition to the ship tours on Jan. 23-24, OCEARCH also plans a Kickoff Party from 4-7 p.m. Jan. 24 at Mary Ross Waterfront Park in Brunswick. The expedition will conclude in Savannah, Ga., on Feb. 13.