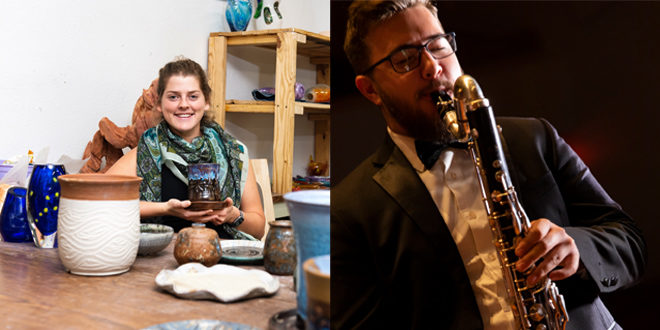 Even as the Linda Berry Stein College of Fine Arts celebrates its 60th year, it continues to focus on the future by creating two schools within the college, Jacksonville University Provost Dr. Chris Sapienza announced today.

The Stein College will now contain the School of Performing Arts and the School of Art & Design to better prepare students to realize their full artistic, intellectual and professional potential.

“This decision helps sustain our long and successful traditional fine arts education history and remain a relevant, contemporary and forward-looking institution,” Dr. Sapienza said. “It is another step in our trajectory to also become a premier educational institution.”

“This decision is an example of amplifying our assets,” Dean Snyder said. “This will expand our intra-collegiate relationships between departments such as Engineering and Theater and Film and Business and Music while building upon our long-standing excellence and collaboration between Music, Theater and Dance.”

Many of the programs within the School of Art & Design, for example, will occupy space in the University’s currently developing STEAM (Science, Technology, Arts & Mathematics) Institute. Students in graphic design, animation, film, and media arts will be able to learn and collaborate with their peers in engineering, physics, and computer science.

This will add to the existing School of Performing Arts spaces that include Terry Concert Hall, Swisher Theater, Brest Dance Pavilion and the Phillips Fine Arts Building, which houses the Alexander Brest Gallery and Blackbox Theater.

The School of Performing Arts will offer undergraduate degrees in Dance, Music with concentrations in Vocal, Instrumental and Piano Performance, Composition and Jazz/Commercial Music, Music Education, Music Business, Music Theatre and Theatre Arts and a graduate program (master of fine arts) in Choreography.

The Stein College has offered almost six decades of world-renowned and award-winning arts education since being established by the late Chancellor Emerita Dr. Frances Kinne. In 2018, the University named the college the Linda Berry Stein College of Fine Arts in recognition of one of the largest gifts the institution had ever received, a multi-year, multi-million dollar contribution from alumna Linda Berry Stein ’69 and her husband, David Stein. That investment will provide for the Stein Artist Scholars Endowment, endowed “Steiner” student scholarships in perpetuity, further renovation of the Phillips Fine Arts Building – including an outdoor study and creative collaboration plaza adjacent to the arts complex – and will create the Linda Berry Stein Fine Arts Student of the Year award.

The transformational gift and its legacy continued the deep relationship between Jacksonville and Linda Berry Stein, who was a protégé of Dr. Kinne‘s, a Miss Jacksonville University while attending school, a member of the University’s Board of Trustees after graduation, and, along with her husband, one of the country’s most prominent volunteers and philanthropists.

Stein College also has won renown for its glassblowing program, and artwork by Jacksonville University students and faculty are displayed at the Florida Times-Union Center, the Cummer Museum, and the Jacksonville International Airport as well as within the university’s notable and growing public art collection on campus.