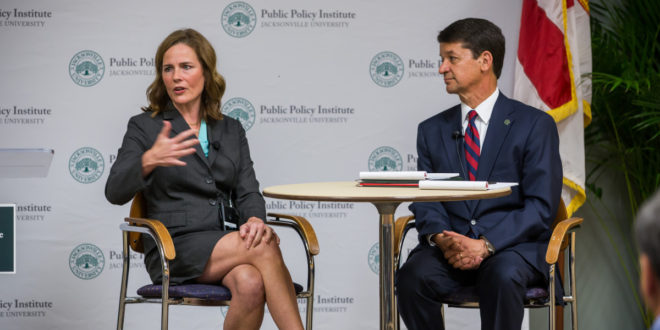 The outcome of the presidential election on Tuesday, Nov. 8, will change the Supreme Court for decades to come.

Along with the open seat of late Associate Justice Antonin Scalia, three other Supreme Court Justices are between 79 and 83, giving rise to the likelihood that the next U.S. President may have four appointments to the Supreme Court.

That analysis was part of the discussion during the fourth annual Hesburgh Lecture with University of Notre Dame Professor Amy Coney Barrett hosted by the Jacksonville University Public Policy Institute Nov. 3. (See a gallery of photos from the event below.) Barrett noted that a conservative majority has existed on the Court for three or four decades, but it could change based on the election. She commented that if Clinton is elected, the country would likely see more justices who have a broader interpretive approach, but contrasted that with the unknowns of a Trump presidency.

Barrett delivered the Institute’s fourth annual Hesburgh Lecture discussing the implications of the presidential race on the court just as voters prepare to cast their ballots. The Hesburgh Lecture Series brings top experts from Notre Dame to speak on public policy matters and is presented by the Jacksonville University Public Policy Institute in collaboration with the Notre Dame Club of Greater Jacksonville.