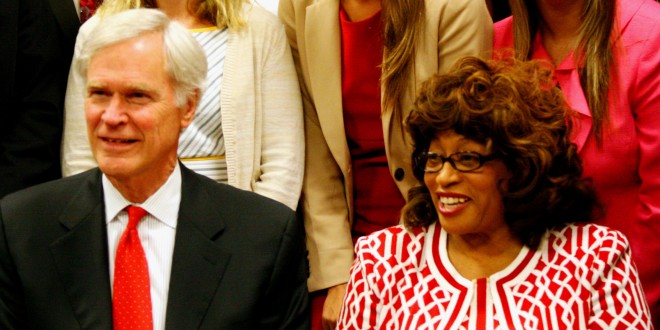 The pair discussed topics ranging from ISIS and defense to health care and the environment. The lawmakers, both from Northeast Florida, saw eye to eye on a number of topics, and in the case of Ebola, each said it was a serious situation that warranted further action. 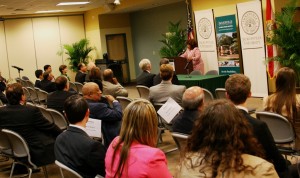 However, while Brown, a Democrat, backed away from the idea of a travel ban, saying it could be circumvented by people from affected areas flying to other countries and then traveling to the U.S., Crenshaw, a Republican, argued a prohibition on travel may need to be considered.

“This could have a very serious impact on our national security,” he said. “I’m not sure we’re absolutely prepared to deal with it all.” 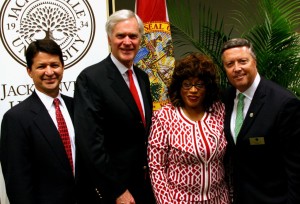 Brown, who announced that in the next session she will be the new ranking minority member of the House Committee on Veterans’ Affairs – or chairman, if the Democrats take back the House in November’s elections – took the lead on ISIS when asked by a JU PPI master’s in public policy student whether American “boots on the ground” were needed in Iraq.

“This is a very complicated issue, and that is a seriously mean neighborhood over there,” she said. “And you know what? We spent a trillion dollars – a trillion – to train their fighters, and now we can’t find them. Who is going to partner with us? We need countries involved who feel they have a dog in this hunt.”

Regarding the Environmental Protection Agency’s proposed new rules on CO2 emissions, both Congress members called for modifications for public utilities. JEA has said the goals would disproportionately affect it and render its Jacksonville coal-fired power plant obsolete. 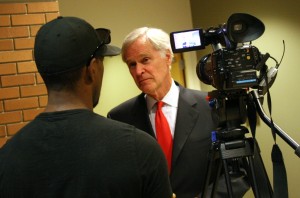 “Many people I represent are on fixed incomes and can’t afford higher utility bills,” Brown said. “We do need clean energy and clean air, but we can also clean up coal and get a comprehensive energy policy.”

Crenshaw agreed and said he believed the regulations being suggested would eventually be toned down. 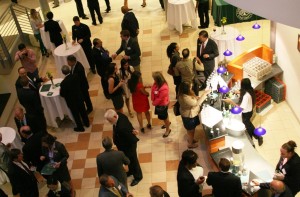 “We improved our clean coal technology but now they are saying clean coal isn’t good enough,” he said. “Yet you have to realize while clean air is the goal, China is building a new coal-fired plant every 10 days. These regulations are too extreme.”

Thursday’s event was attended by JU Master in Public Policy (MPP students), MPP faculty, JU PPI Board of Advisors and the public. In April, JU will confer the first MPP degrees in Florida. Currently there are 22 MPP students in the JU MPP program. There are more than 50 MPP programs in the country, and this is the only one in Florida. 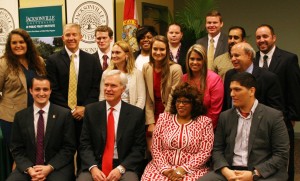 Afterward, both representatives praised the JU PPI for its pioneering academic programs and its community impact in putting relevant issues on the table for civil discussion.

“It’s great to have students learning the political process, because public policy affects everyone,” Crenshaw said.

“This institute is a very good start, and I’d like to see it broadened even more,” Brown said. “This is a wonderful beginning, and we had a chance to bring up many interesting topics tonight.”

For more information on the JU PPI or to apply, visit www.ju.edu/ppi.