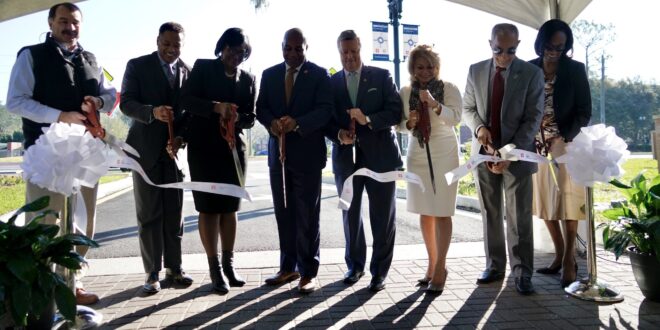 The newly-completed turbo roundabout that loops drivers into the Jacksonville University campus from Merrill Road and University Boulevard isn’t just a “game changer” for JU, but for the entire Arlington community.

President Tim Cost said the roundabout enhances the front door to the University, but also the ability to develop housing, retail and other uses along the University Boulevard corridor.

“You simply couldn’t do it with cars going 70 miles an hour north and south on University Boulevard,” Cost said. “That’s what was happening. So we began to develop a transportation strategy thanks to Jacksonville Transportation Authority CEO Nat Ford and others, around this idea of a safer and more beautiful surrounding area.”

JTA cut the ribbon for the roundabout Feb. 10, marking the completion of the $4 million project designed to calm traffic and enhance the neighborhood.

At the site of what used to be a four-way intersection with traffic lights, the Jacksonville Transportation Authority built the nation’s first turbo roundabout, aimed at creating efficiency and safety for both drivers and pedestrians. The project is part of the JTA Mobility Works initiative and is part of the Arlington Community Redevelopment Area (CRA).

Drivers looking to go straight, left or make a U-turn in the circle stick to the left lane and drivers wanting to go right stay in the right lane, all while yielding to drivers already in the roundabout.

“It allows for perpetual motion, we are actually able to move cars much more safely and faster through this intersection and alleviate some of the congestion that has been plaguing the front of this university,” Ford said.

Pedestrians coming into campus from across University Boulevard can enter much more safely now. Freshly paved and widened sidewalks lead into crosswalks with flashing lights, so drivers know to yield to pedestrians crossing the road.

The roundabout isn’t the only recent improvement in the Arlington area, and it certainly won’t be the last.

The former Town and Country shopping center at the corner of the Arlington Expressway and University Boulevard is being renovated and renamed College Park, in homage to the Jacksonville University campus just a few miles down the road.

JWB Real Estate Capital plans to add a grocery store, apartments and a shipping container food court to the property.

IDEA Public Schools broke ground on its River Bluff campus at the south end of the university’s property earlier this year.

Dolphin Pointe Health Care, a skilled nursing facility, opened near the north end of campus in 2019. The student housing development Jackson Commons opened north of campus just before that.

Cost said to expect more positive collaboration between Jacksonville University and the Arlington community in the years to come.