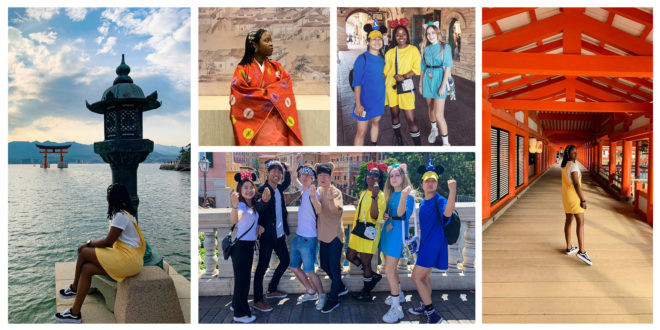 June was one for the books! With only a month left in Tokyo, time seems to be moving faster than I can keep up. June was a wholesome month of being present and engaged with friends. The highlights of June, however, would have to be my trips to Tokyo Disney Sea and Hiroshima.

It all started at the pizza party I mentioned a few blog posts ago. The party was organized by a culture exchange circle (circle is the term for non-competitive clubs/extracurriculars) called Hauska, and by the end of the party, I decided to officially become a member. The circle’s activities involve participating in various popular Japanese games  – think word games and elementary school games, not video games – which I think is a creative and fun way to establish a relaxed atmosphere for international and Japanese students to mingle, while practicing their language skills. None of our meets has been a snooze-fest, that’s for sure.

Fast forward to a couple of weeks later, we were considering a Hauska Disney Trip, but we remained undecided between Tokyo’s Disney Land or Disney Sea. So, as these things usually go, it was put to a vote. Tokyo Disney Sea won by a landslide. Thus, it was decided that our rag-tag group of not-children-but-not-really-adults would journey to Chiba prefecture for a day at the “happiest place on earth.” It is probably important to mention that, although I live in Florida (about 4-5 hours away from Disney World), I had never been to a Disney park before this excursion. So, I was quite excited.

June the 16th arrived with a forecast of sunshine and clear skies. We set out early with empty stomachs, but full hearts. By 8 a.m. we were all assembled in front of the gates and could barely contain ourselves. The gates opened and we were off. We got our Disney ears and took an unmentionable number of photos to document the moment. The rest of the day was a non-stop flurry of activities. We went from ride to ride, from caramel popcorn to Turkey leg, from screaming to crying (tears of laughter of course). I recorded my most steps in Japan on this fateful day, which ended with the park-wide evening show — a huge production involving flames, fountains, fireworks, and a good amount of [Disney] magic. It’s safe to say I now understand what the hype is all about. I will definitely be making a trip to my local Disney World upon my return to good ole’ Florida.

Next on the highlights, Hiroshima. In the spirit of experiencing more of Japan outside of Tokyo, I decided to spend three days in this amazing city with two close friends. In sharp contrast to Tokyo’s never-ending hustle and bustle, Hiroshima is a much calmer hub. As many of us are already aware, Hiroshima, situated on Japan’s Honshu Island, was destroyed by an atomic bomb during WWII. Despite this, today Hiroshima is a gorgeous modern city that strives to be a beacon of peace for our present international society. We took time to visit and reflect at the Peace Memorial Park and Museum. There are also memorials all over the city dedicated to the lives lost as well as wishes, writings, and prayers for a peaceful future.

From there, we continued to weave our way through the crowds until we made it to the opposite side of the island where the Itsukushima shrine is located. The Itsukushima shrine is quite the sight. Situated on the seaside, it’s orange-red façade coupled with its detailed woodwork give it an almost ethereal feel. And the Great Torii at sunset is one of my favorite sights to date.

Our sight-seeing continued with a ferry ride across Hiroshima Bay to the small island of Itsukushima, popularly known as Miyajima. The island is famous for its Great Torii – the entrance to the Itsukushima Shrine. After a minor detour (we got off on the wrong island and had to convince the ferry company to re-issue our tickets!), we made it to this small treasure of an island, where we were greeted by a welcome committee of deer! I was not aware there would be deer on this island, so it was a pleasant surprise. After trying and failing to pet them, we headed down the bustling Miyajima Omotesando shopping street. There we tried grilled oysters, a specialty of the Hiroshima area, and Momiji Manju, a maple leaf-shaped cake traditionally filled with sweet red bean paste that is one of Hiroshima’s most popular dishes.

During our second day of the trip, we visited Hiroshima castle, where we took a guided tour on the moat and into the castle grounds itself. It had to be my best castle visits in Japan. However, I think I speak for all three of us when I say that one of the best things about Hiroshima is its Okonomiyaki – a savory Japanese-style pancake served by many street food vendors. During my winter break trip to Osaka, I sampled its Okonomiyaki and was fairly impressed. However, a friend who happens to be from Hiroshima told me Hiroshima’s Okonomiyaki is better. Dare I say, I took that as a challenge. It became one of my favorite questions to ask at my chat tables at work. The majority vote was firmly with Hiroshima’s Okonomiyaki. I realized I could not rest until I tried some of this so-called superior Okonomiyaki. I can now say that the Natasha pre-Hiroshima Okonomiyaki was unenlightened. Hiroshima’s addition of yaki soba to the savory pancake changes the game. I don’t think I would be exaggerating by saying we had Okonomiyaki all three days we were in Hiroshima.

Well Dolphins, I’m back in Tokyo preparing for my finals and having last hurrahs with all the amazing people I’ve met. I look back to last September when it looked like a year was a long time, and then I think “where did all the time go?” Cheers to the last month of my exchange program!

Ms. Ubani is a Junior and an international student from Nigeria. She is pursuing a double major in International Business and Marketing, and is currently spending her Junior year at Waseda University in Tokyo as an exchange student through the Davis College of Business.