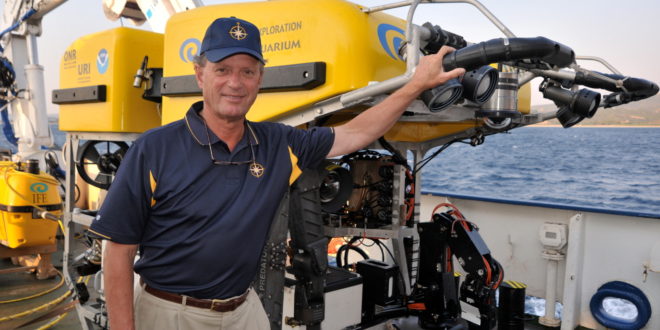 The iconic discoverer of the legendary and fated sea liner Titanic will talk about the state of deep-sea exploration on campus next week.

“It is a tremendous honor for Jacksonville University to host an educational and cultural trailblazer in the remarkable Bob Ballard,” said JU President Tim Cost. “As a leading convener who previously welcomed world-class innovators like filmmaker Ken Burns, Apollo 15 Commander David Scott and PepsiCo CEO Indra Nooyi to inspire our campus and community, we are proud to be at the forefront of deepening the understanding and appreciation of critical issues facing the globe.”

Ballard will spend an hour with students at 9:30 a.m. Oct. 10 at the MSRI building on the St. Johns River, where he will discuss how he has turned his dreams into reality by taking risks and learning how to face failure and turn it into success. After an 11:30 a.m. reception in the Davis College of Business lobby, he will speak on “Deep Sea Exploration: Past, Present and Future” at a noon luncheon in the DCOB conference rooms. He will take questions from the audience afterward.

(Tickets to the luncheon for the public are $75 each and can be purchased by clicking here.)

MSRI Executive Director Dr. Quinton White met and worked with Ballard in the late 1980s when Ballard created The JASON Project, an ongoing effort to inspire middle-schoolers to pursue interests and careers in STEM (science, technology, engineering and mathematics). He called Ballard “one of the great leaders in marine science and deep sea exploration.”

“We are pleased to present him with the inaugural Jacksonville University Marine Science Pioneer Award in recognition of his outstanding contributions to marine science and public awareness of the importance of our world’s oceans,” White said.

Best known for finding the RMS Titanic in 1985, Ballard has tracked down numerous other significant shipwrecks as well, including the German battleship Bismarck, the lost fleet of Guadalcanal, the U.S. aircraft carrier Yorktown (sunk in the World War II Battle of Midway) and John F. Kennedy’s boat PT-109.

While those discoveries have captured the imagination of the public, Ballard has said he believes his most important discoveries were of hydrothermal vents and “black smokers” in the Galapagos Rift and East Pacific Rise in 1977 and 1979, along with their exotic life forms living off the energy of the Earth through a process now called chemosynthesis.

In addition to being a National Geographic Society Explorer-In-Residence, Ballard is also a commissioner on the U.S. Commission on Ocean Policy.

Ballard was born June 30, 1942, in Wichita, Kan., but moved to California at a young age and grew up exploring the shore in San Diego. Ballard has a Ph.D. in marine geology and geophysics from the University of Rhode Island. He spent 30 years at Woods Hole Oceanographic Institution, where he helped develop telecommunications technology to create “tele-presence” for his education initiative, which allows hundreds of thousands of schoolchildren to accompany him from afar on undersea explorations around the globe each year.

Ballard has 22 honorary degrees and six military awards. He was also a Commander in the U.S. Naval Reserve, serving in the Navy from 1967 to 1997. He received the National Geographic Society’s prestigious Hubbard Medal in 1996 for “extraordinary accomplishments in coaxing secrets from the world’s oceans and engaging students in the wonder of science.” In 2014, he was elected to the American Academy of Arts and Sciences.

His discoveries also include sunken remains of ships along ancient trade routes in the Mediterranean Sea; two ancient Phoenician ships off Israel, the oldest shipwrecks ever found in deep water; and four 1,500-year-old wooden ships, one almost perfectly preserved in the Black Sea. Ballard’s Black Sea project seeks evidence of a great flood that may have struck the region thousands of years ago.