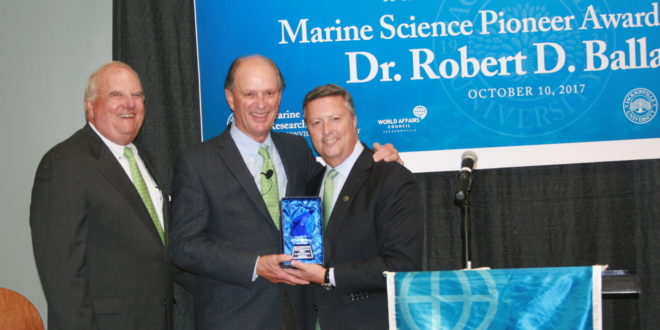 Renowned oceanographer and discoverer of the Titanic Dr. Robert D. Ballard expressed concern for the Earth’s future during a visit to JU Tuesday, Oct. 10, where he engaged with students one-on-one, delivered a keynote and accepted the University’s inaugural Marine Science Pioneer Award.

“We have not conquered our own planet,” he said during a luncheon in the Davis College of Business. “We have evolved ourselves into a box. We need to move away from being hunter-gatherers and move into our ocean and begin looking at feeding our planet. Farms are tanking out.”

“It’s an honor to work with the Marine Science Research Institute to bring you this illustrious speaker,” said World Affairs Council Chairman David Strickland, thanking JU President Tim Cost ‘81 for his continued support of the council. “If there were ever a guy who epitomizes the Indiana Jones of the ocean, that’s the guy you’re going to hear from today.”

Earlier in the day, Ballard met with students and faculty for a special discussion at the Marine Science Research Institute. After touching on the discoveries that shaped his career, some of which he described as accidental, Ballard explained how his broad scientific background and military experience contributed to his successes as an explorer.

Ballard called for heightened attention and awareness around further exploring Earth, and at one point questioned the viability and concept of colonizing and terraforming Mars, an idea recently proposed by Tesla founder and billionaire Elon Musk.

“We’re only living on 5 percent of this planet. Why don’t we live on 100 percent of the Earth?” he said. “You should not be sending that message to this generation. There is no Plan B. You are going to live it out here or die here. There is no option of turning this into a trashcan and living somewhere else.”

At the luncheon, JU MSRI Executive Director Dr. Quinton White introduced Ballard to the audience, describing how the pair’s relationship extends back 30 years to when they worked together on the middle-schooler education effort called the Jason Project.

“It’s almost as if a Ph.D. is not enough. Bob Ballard has inspired many careers. He is an incredible explorer and an incredible science educator. And one thing I can honestly say is that he’s just a really nice guy.”

For more than an hour, Ballard regaled the audience in DCOB with photos and stories from his deep-sea expeditions, including the discovery of the Titanic. He didn’t dedicate too much time to the ill-fated ship, joking he would take “only one question” about the wreck. He spent more time discussing what he considers his most significant discoveries: hydrothermal vents and “black smokers.”

“When we were exploring the deep ocean ridge, we realized the entire volume of the world’s ocean was going inside our Earth and coming back out in black smokers. But what was amazing about it was that it wasn’t smoke. It was microcrystals of minerals, copper lead, silver, zinc and gold,” Ballard said. “And that discovery was dwarfed by what was living around these vents, in a world that we were told was a desert with no sunlight.”

Ballard’s current pet project is mapping migration of the anatomically modern humans from out of Africa. He recently purchased a large ship that he staffs with a wide variety of scientists and students from all walks of life. He also keeps an extensive network of scientists “on call” at all times, allowing him to virtually connect the best and brightest minds to any discovery in “just 30 minutes.” All the data collected by the ship is open-sourced, free to be used by anyone in the world. 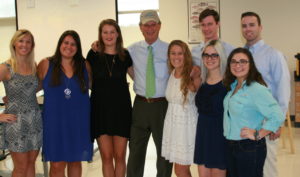 In presenting Ballard with the Marine Science Pioneer Award, Cost complimented him on the legacy of his research.

“I think we are living through the prime of one of the all-time, greatest explorers ever among our species, the great Dr. Bob Ballard,” said Cost.

Ballard’s words left a big impression on JU students. Christina LoBuglio ’17, pursuing her master’s degree in marine science at the MSRI, said the talk inspired her to continue pursuing her passion.

“Hearing the words he said was so inspirational. Hearing that a leader in the field believes in what my generation can do makes me want to follow my passion for marine science even more.”