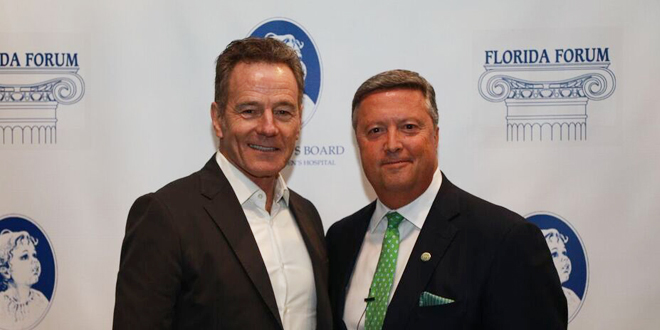 The much anticipated event was part of a series established by The Women’s Board of Wolfson Children’s. The Forum adds to the collective dialogue of Jacksonville and made more than $31 million in hospital contributions to date. Supporting one of the best children’s specialty hospitals in the U.S., Cost said, is what makes his role in the series so rewarding.

Cranston’s visit became part of nearly three decades of top speakers, and he wasn’t the first to sit across the table from Cost.

In January 2018, Theo Epstein sat in that chair. Cost bantered with the Chicago Cubs executive as if a thousand people weren’t watching. Epstein and Cost talked of baseball, relationships, leadership, and life. Cranston and Cost covered everything from work ethic and hemorrhoid commercials to “survival jobs” and finding the emotional core of a character.

Cranston stepped into the Florida Times-Union Performing Arts Center to meet with Cost after a tour of the hospital.

Sending It Right Back Out﻿

“Life is reciprocal,” Cranston later told Forum attendees. “Everything good that comes in, you’ve gotta send it right back out.” This came from the man who made his acting debut at eight years old in a United Way commercial and raised millions for charities over the years. Cranston’s tour included a stop at the neonatal intensive care unit where new fundraising efforts will focus.

Jacksonville University Keigwin School of Nursing students are among the friendly faces at Wolfson Children’s. They have become an integral part of the work there. Hundreds and hundreds of JU graduates have completed clinicals, served as volunteers, preceptors, mentors, and many have joined Baptist Health. Cost—as a university president constantly amazed and moved by students—touts their accomplishments often. For more than five years, his leadership team has worked nonstop to establish JU as the premier health educator in the region.

When Florida Blue CEO Pat Geraghty introduced Cost as moderator, the resulting cheers showed JU Dolphins were “in the house.” Cranston fans weren’t shy either. The applause thundered as the award-winning actor took the stage.

His stride long and smile wide, Cranston settled into the interview by clarifying what he does. His job as an actor, at its essence, was about a relationship with the audience, he said. “Right now in our society, there’s a lot of devisiveness… but whether you’re two or 102, we all enjoy a good story.” Storytelling, he said. “That’s my job,” and what he calls the “sweetest part of being human.”

A Conversation to Remember

The 40-minute conversation clipped along, interrupted only by laughter and applause. Cost asked about character-building techniques, handling life in the spotlight,  transitioning from screen to stage, and Cranston’s book A Life in Parts. Cranston touched on his relationship with Breaking Bad writer-creator Vince Gilligan, joked about his soap opera days, and impersonated Larry David and Bernie Sanders.

He also discussed what he calls “the funnel.” Everything he reads, watches, and researches pours into the making of his characters—LBJ, Hal, Buzz Aldrin, Li, Vince, Dalton Trumbo, Joe Brody, Tony Drake, Mr. Jamieson, and the list goes on.

“You never know where a great idea can come from.”

Cranston told Cost about one experience on the Seinfeld set. A teachable moment that led to one of the most hilarious clips in Seinfeld memory. “A guy on a ladder,” he said, probably an electrician brought in for the day, made a suggestion to Cranston. They were alone and between filming. “You know what would make that bit even funnier,” the man said. What followed became an unforgettable entertainment moment. Cranston reminded Forum goers, “You never know where a great idea can come from.”

The Good of Breaking Bad

The Cranston name has been embedded in the entertainment industry since the 1950s. That heritage includes his wife and daughter, both actresses. Breaking Bad’s Aaron Paul and Malcolm’s Frankie Muniz have referred to Cranston as a mentor and the perfect movie dad. In creating his most iconic role, Cranston modeled Walter White through the lens of his own childhood experiences.

“We go through life learning from family,” he said. “And sometimes, in the worst of circumstances, they can teach you what not to do—how not to live.”

He told Cost that his connection to Breaking Bad grew from a brief stint on X-Files and what he described as his “attraction to damaged characters.” He described his first impressions of the role. “I saw and felt the humanity of Walter, and I knew this could be great. Of course no one realized how it would catch on.” The chemistry-teacher-turned-criminal-badass reflects the moral dilemmas Cranston said represent “the every man.” This inspired his yes to AMC executives.

For Cranston, his Breaking Bad character was the embodiment of the inauthentic and ultimately poor choices everyone is tempted to make in life. “Any time we try to do something that isn’t who we are, that’s Walter White.”

More than once, Cranston referred to time spent mentoring young actors. His recurring advice: hard work. There will always be someone more talented, he explained, and work ethic was the way to overcome. “You can outwork them. I don’t think I’ve ever worked with a genius, just people who work hard. If you’re not willing to put in the work, you won’t succeed.”

“You have to know your stuff and be ready to grab an opportunity.”

Cost—who spends countless hours with 18 to 25 year-olds just getting started in their careers—nodded in agreement. “You have to be ready,” Cranston tells students on a regular basis. And he said it again at the Florida Forum. “You have to know your stuff and be ready to grab an opportunity.”