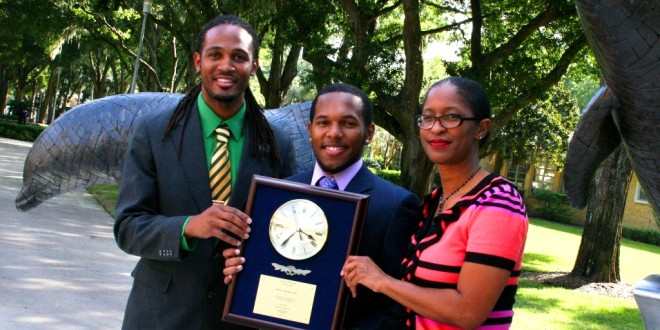 When it came time to recognize leadership during the recent 15th annual Minority Access National Role Models Conference in Washington, D.C., Jacksonville University students stood out in a big way: out of 150 nationwide nominees, they took home three of the four National Role Model awards.

Students Edrick Hamilton, Alanna Rowan and Keith Taylor Jr. received the recognition after being nominated by Dr. Carole Barnett, chair of the Division of Humanities, and Dr. Colleen Wilson, chair of the School of Education..

“This is a huge distinction that really reflects on their backgrounds and showcases their commitment to academics and community service,” Barnett said. “They have exhibited scholarly excellence and are extremely involved on campus, making them top role models for others.”

The National Role Model awards are a highly competitive honor that recognizes minority college students who have maintained outstanding academic records and successfully completed a major research project. Recipients are eligible to apply for grants and scholarships through the organization, and the recognition also aids them as they apply for grants and scholarships through other governmental agencies and private sources.

Among other projects, Hamilton and Rowan, both graduate students in the School of Education’s 5-year master’s program in elementary education, conducted intensive research with Dr. Tammy Ryan, Associate Professor of Reading Education, on the ability to teach reading to local elementary students through the use of iPads.

“JU is a close-knit family, and the professors really guide you to do your best,” said Hamilton. “For example, if you’re missing from class, you know your professor is going to reach out to you to see if anything is the matter. They push you to the next level to achieve, and it sets you up for success. The proof is JU having three of four winners at a national event.”