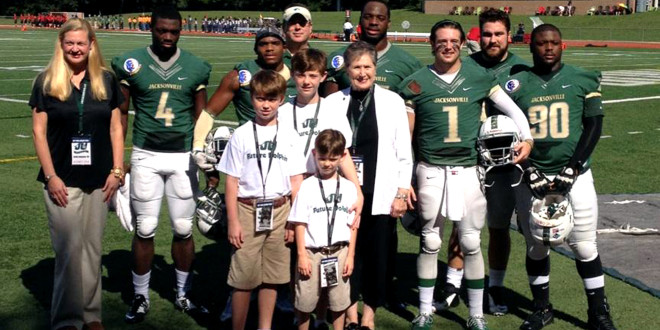 Members of the Delaney family pose Saturday with JU football team captains, who wore the distinctive patch of the famed “Seawolves” Helicopter Attack Squadron 3 in honor of former JU Trustee the late Rear Admiral Kevin F. Delaney, who was a member.

A special brand of honor and integrity was in the air at Milne Field Saturday, as the University recognized current and former service members at its Military Appreciation Football Game vs. Davidson College.

Admiral Delaney, who died in April of this year, was a JU Trustee, donor and parent, and his wife, Pat, will be in attendance, along with two of their three daughters, Kelly Delaney ’92 and Seana Delaney McAfee ’97; Delaney grandchildren; other family friends; and Trustees with whom he served. In addition, football team captains will wear the distinctive patch of the famed “Seawolves” Helicopter Attack Squadron 3, of which Admiral Delaney was a member.

“His contributions to Jacksonville University are numerous … including dedicating countless hours to ensuring the improvement of our campus and advancing scholarship among our students,” President Tim Cost said at the time of Admiral Delaney’s death. “In addition to his extraordinary contributions to our community and country in public service, industry, the military, philanthropy and so much more, I know just how much he gave of his time to improve the prospects of JU and the lives and our students.”

Other contributions to JU include serving on the Buildings and Grounds Committee; serving on the important Nominating and Trustee Governance and Executive committees and on the ad hoc Campus Security committee as its chair; and, with his devoted and loving wife, Pat, giving generously to the University, to advance scholarship among JU students and improve the NROTC library, among other areas. 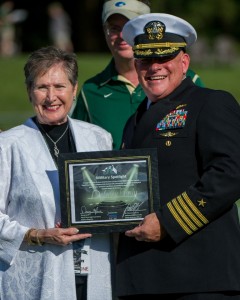 Admiral Delaney served as commanding officer of Navy Region Southeast, as well as of Jacksonville Naval Air Station. He flew 686 combat missions as a U.S. Navy helicopter gunship pilot with the Seawolves in Vietnam and retired as the most decorated officer in the U.S. Navy. The Seawolves were a land-based Navy unit charged with helping naval riverine forces block North Vietnamese Army and Viet Cong infiltration and use of the rivers, canals and jungle that made up the Mekong Delta.

In a Florida Times-Union article in 1991, Admiral Delaney was praised for his leadership efforts.

“As commanding officer of Jacksonville Naval Air Station for less than two years, he already has drawn more acclaim to the base than it has ever received, and put Jacksonville firmly on the Navy’s map … when the base was named the Navy’s best in the world,” the Times-Union wrote. “Fellow sailors, base employees and community leaders describe him as a dynamo, a miracle worker, who’s in his office at 5 a.m. and one of the last ones to go home.”

Members of Junior ROTC units from throughout the city invited by the JU Naval ROTC were also present, as well as local senior military leaders.