Home » Topics » Alumni » The Impact of a Legacy 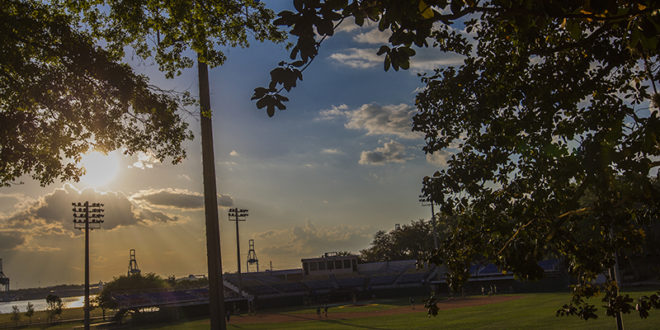 The Impact of a Legacy

Originally printed in the Fall 2016 issue of WAVE magazine. 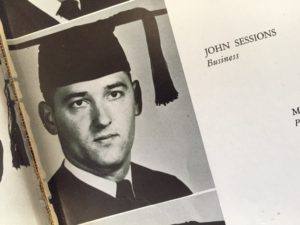 John F. Sessions had just received the diagnosis. He was facing a battle against a brain tumor. There wouldn’t be much time left. Suddenly, he was determined to rid JU’s ballfield of a recent ant problem. Someone else could have dealt with this task, but it was something he wanted to handle. So he walked every square inch, flagging every mound for treatment.

He didn’t care that it took him and his daughter Caren hours to accomplish. They did it together, and now it’s one of the many endearing stories the Sessions and Felkers tell about the man called Papa. The best part of that particular afternoon, though, was the parking citation waiting on his vehicle when they returned. That gave the family something to laugh about for years to come.

What makes a nearly 75-year-old man so determined to spend an afternoon like that has everything to do with the tenacity, the commitment and the heart for service that defined the life of John Sessions (Class of ’59)—a name now synonymous with legacy.

Sessions was born Jan. 7, 1934, in Mayo to the Festus Williams and John Cabble Sessions. He later became a JU business graduate, avid sports fan and all-around JU patron, as well as a devoted husband, father and grandfather. Even beyond the gates of Jacksonville University, he was widely known as a renowned business owner, community leader, honored veteran and dedicated church member. Sessions passed away on Nov. 14, 2009.

The majority of Sessions’ 75 years were spent in service of others—his family, his country, his company and his alma mater. His was a legacy of giving back that began during the University’s 1958–59 Silver Jubilee academic year. Growth was on the horizon and JU took another huge step forward with the Class of ’59, the first students to graduate from the full-fledged four-year institution.

A look at JU’s student newspaper at the time, The Navigator, portrays JU on the edge of something big. The Wolfson Student Center had recently been dedicated, golf was added to the sports program, about 5,000 books were added to the Swisher Library and JU hosted a number of important guests for its 25th anniversary, including aviatrix Jacqueline Cochrane, President of Atlantic Coast Line Railroad W. Thomas Rice, U.S. Army Ballistic Missile Command’s Maj. Gen. John B. Medaris, and Abigail van Buren, better known as “Dear Abby.” JU’s Frank Johnson, then the youngest university president in the U.S., presided over the landmark expansion and innovation.

Sessions transferred to JU from Troy State University, having two years of service in the U.S. Army under his belt. He had brought along his new wife, whom he’d known since age six. Valedictorian of her graduating class at Lafayette High School in Mayo, Elizabeth Carson Sessions adored her husband of 52 years, a fact her children and grandchildren remember well. 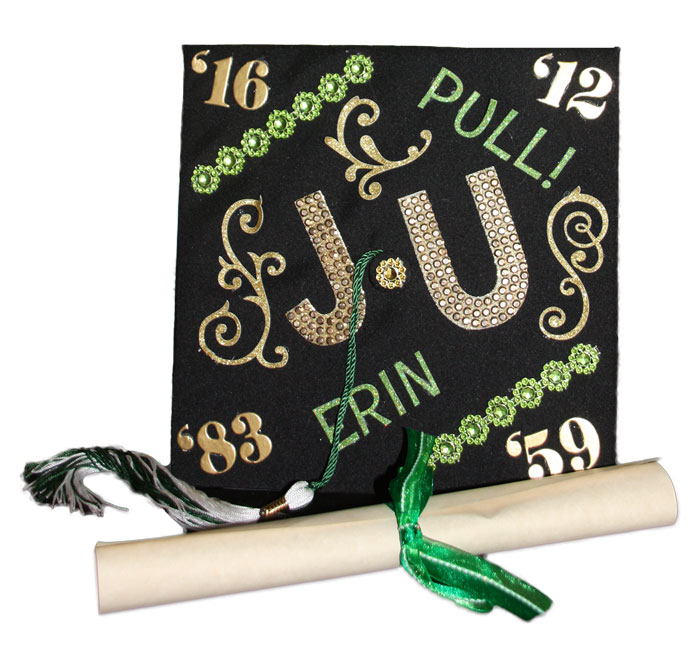 The October 1958 issue of The Navigator included this plea from senior class president Jack Kenny:

“…we, the first graduates of Jacksonville University, want to leave behind some concrete evidence of our appreciation to the University when we graduate.”

Perhaps Sessions picked up a copy of that paper and took Kenny’s message to heart, because he left concrete evidence of his appreciation in a big way. Not only did he graduate from JU, but the University later became the alma mater of his daughter Caren Sessions Felker, grandson Justin Foye Felker and granddaughter Erin Elizabeth Felker.

Sessions was among the roughly 100 graduates of the Class of ’59, and he would go on to make significant use of his business degree.

Joining Arlington Fuel Oil Co. after a brief career as a math teacher, Sessions served as vice president. Not long after, in 1963, he became owner and operator of one of Arlington Fuel’s subsidiaries, the Bug Out Services pest control company.

“He was a great business man and an even greater human being,” said friend Robert Holyfield, a former manager and long-time employee of Bug Out Services, after Sessions’ death.

When Sessions wasn’t at the helm of one of the largest pest control companies in the nation, or at home with his family, he could often be found at a JU sports event.

“Some of my earliest memories are going to JU basketball games in the arena downtown,” says grandson Justin, a 2012 JU graduate. He remembers being five and spending entire days at JU’s baseball stadium—the one named in honor of his grandfather.

Justin and his sister Erin talk of the many times they visited concession stands during JU sports events and how everyone knew Papa. No matter what the siblings ordered, they were offered an extra cup of ice because people knew that was what Sessions liked.

“He always asked for extra ice, and I always thought it was funny,” Justin said.

Along with her JU application, Erin’s cover letter painted the portrait of a man with a memorable smile who called everyone “son,” though he knew all of their names. She’d been to many games with Papa, been introduced to players, sat in the stadium’s familiar green chairs and even toted along a giant plush dolphin that she favored.

On May 7, 2007, when the JU baseball stadium was officially dubbed John Sessions Stadium, Justin was touring several college campuses and preparing to make an important decision. He was accepted to the University of Central Florida and the University of North Florida, but ultimately selected JU.

“The club is bringing people to the school,” Justin said, remembering the days when shooters supplied their own equipment and only a handful showed up on a regular basis. Today, the team numbers around 60 shooters and is divided into Bronze, Silver and Gold squads, attracting new students from as far away as Canada. They have represented JU with numerous wins since the club’s inception, including last spring’s American Skeet Championship, where Erin placed second overall in her category.

Justin, captain of the team during Erin’s freshman year at JU, says their first national tournament yielded surprisingly good results, including recognition for best sportsmanship. That moment set a precedent that Justin and Erin proudly acknowledge. The diligence and passion of the team members regularly earn JU high rankings.

“It’s very humbling to go to an event like that,” Justin said, adding that the JU shooting team is a source of great personal pride for the Sessions and the Felker families. “But you get out there, where they’re actually picking the Olympic team, and you’re like, wow!”

Leading and taking initiatives seem to run through their veins. And it wasn’t just the creation and development of a competitive shooting team; the family has been a magnet for start-up initiatives and leadership opportunities.

Though not all stuck, foundations were laid for a Rotaract Club and equestrian organization with a focus on hippotherapy. Though JU may not be ready to launch such student groups at this time, history has taught all who care to observe to never doubt the Sessions-Felker determination. It is this spirit of ingenuity, tenacity and dedication that continues to be encouraged campus-wide at JU—in its teaching philosophy, learning environments and service to surrounding communities.

Justin and Erin rotate presentation duties for the annual John Sessions Spirit Award at JU’s athletic banquets. It goes to the Dolphins team with the most school spirit, and is always a highlight for the family.

“The night of the first Spirit Award,” Erin said, “Justin had a crash on my dirt bike a couple hours before. He broke his ankle and had a concussion, but didn’t tell anyone. So he presented the award that night without any indication of being hurt, but barely remembers it.”

The family has shared much over the years, including many JU-inspired moments. One that always gets them chuckling is the time Caren, a 1983 JU elementary education graduate, was asked to order polo shirts for the shooting team. At the time, the group had 30 participants. But somehow, during the ordering process, an extra zero was tacked on and the team ended up with 300 green polos—a supply that would take years to exhaust.

Even moments that seemed unpleasant in the beginning now make for fondly recalled stories.

“I remember a man getting quite angry with me one day,” Erin said about the time she parked in Papa’s designated spot at the baseball field. “He said, ‘Do you know who John Sessions was?’” Erin answered tongue-in-cheek, “Um, I think his name is on the stadium, right?” Eventually, Erin confessed. “Sir, I’m just kidding. I’m his granddaughter and have a pass to park here.”

But, “It was nice that someone was watching out for Papa,” Erin said.

The heritage Sessions began will continues at JU, as it welcomed another Felker for the 2016 fall semester. Paul and Caren Felker also continue to affect JU as inaugural members of the President’s Parents Council. They were present when Sessions was inducted into the Hall of Fame posthumously in 2010. Many in attendance spoke of how his passion for JU was so infectious. He had an indomitable presence—one that will continue to be felt on campus.

It’s difficult to pass by his many contributions—a golden chair in the stadium, a bronze plaque or an old copy of JU’s Riparian—and not be reminded of his remarkable legacy. How this beloved JU alumnus spent his days in those twilight years reveals how heritage doesn’t happen by accident.

“None of this was here,” Justin said of JU’s campus in the days when his grandfather attended. But because of patrons and champions of JU’s future like John Sessions, the concrete evidence of appreciation has made Jacksonville University the premier institution it is today. 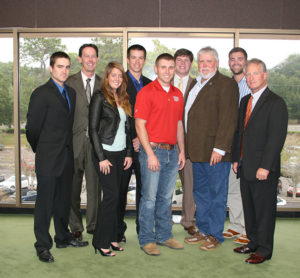 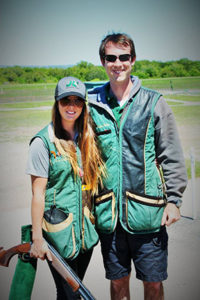