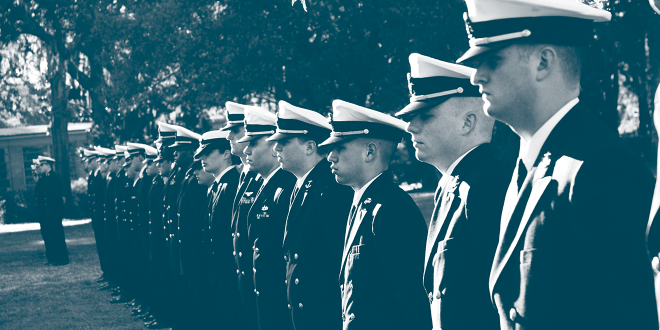 For more than four decades, the Jacksonville University Naval Reserve Officer Training Corps has been among the largest and most active student affinity groups on campus. The program also is a perennial leader-producing machine: more than 1,500 Dolphins have advanced to careers as U.S. military officers upon receiving their JU diplomas.

These men are people JU can be so proud of, and JU has had a hand in their careers,” said Nancy Barker Rodriguez ’93, whose husband, Jose Rodriguez ’94, commanded Helicopter Maritime Strike Squadron 73 in Coronado, Calif., and now works in Naval Operations at the Pentagon.

Offered at JU since 1971, the program provides a mixture of military training and traditional academic study, with coursework occurring in the classroom and in the field.

“Although the NROTC Unit is one of the biggest around, you never feel insignificant at JU,” said Lex Walker ’94, who commanded the San Diego-based USS Stockdale from 2011 to 2013 and is now the U.S European Command’s Congressional Affairs deputy director in Germany. “You know everyone and everyone knows you, which really is reflective of JU as a whole.”

JU has been reaching out to U.S. military members and veterans throughout the university’s nearly 80-year history, including opening its doors to sailors and soldiers after World War II. With its March 25 dedication of the Defenders’ Den, a new 1,000-square-foot Founders Building center for student veterans, along with the recent establishment of scholarships for military veterans and their family members, JU continues to steadily strengthen its military-friendly status, said Dr. Donnie Horner, JU’s chief government and community affairs officer.

JU has about 400 student veterans and about 125 Naval ROTC participants during the 2013-14 academic year.
“I think there’s no doubt that JU’s outreach and efforts not only to midshipmen enrolled in NROTC, but also to student veterans, is part of the culture, part of the norm, and part of a pattern of behavior we engage in at JU,” said Horner, a former U.S. Army battalion commander himself. “We’re really, really proud of our military, always have been, and I think it shows.”

“I always talk about the bond between JU and the Naval ROTC,” he said. “The support for the ROTC unit and for veterans on this campus, too, is absolutely superior. Obviously, JU is a very military-friendly campus.”
JU Naval ROTC program participants-turned-commanders say the university is an ideal starting point for prospective military officers, partly because of its small, community-like setting and its proximity to Jacksonville Naval Air Station, Naval Station Mayport, Naval Submarine Base Kings Bay and the Marine Corps’ Blount Island Command.

“Being in a Navy town like Jacksonville, I was able to experience many unique opportunities not available at most other NROTC units,” said Mark Nieto ’94, commander of the Navy’s Fleet Readiness Center Western Pacific in Japan. “I was able to go flying with local Navy squadrons … and I took advantage of local military airlift opportunities to get around the country. I was also able to get a job in the summers working at Naval Station Mayport.”

Bill Sherrod ’94, who commanded the Helicopter Anti-Submarine Squadron Light 49 in San Diego until November 2013, said JU and its Naval ROTC program set the stage for successful careers.
“The central aspect of the JU experience is the process – the small group dynamics of the classroom enabled the open exchange of ideas that was encouraged by the faculty,” he said. “JU’s military faculty also took the time to develop and mentor their students. They provided unique insight into their respective warfare specialties.”

Meanwhile, Jose Rodriguez said that callings as Navy officers are open to virtually everyone with ambition – particularly through the JU ROTC program.

“The experience we had at JU was multifaceted and exposed us to more than just our futures as naval officers,” he said. “So I think we graduated as more well-rounded individuals and were more prepared for the careers ahead of us and the demands that come with being in command.”