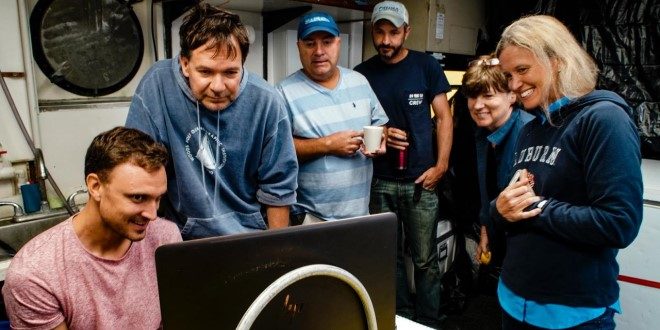 Giant squid are not something you are likely to find in the St. Johns River, but these mystical creatures have fascinated me for a long time.

They were first introduced to me in my first general zoology course as a sort of mysterious deep-sea monster that had never been seen alive.

It was known, at that time, only from dead specimens that had washed ashore.

They grow to over 40 feet long, which is equivalent to a 4-story building, and have the largest eye in the animal kingdom. This is not too surprising since they live in the always dark, deep ocean, or aphotic zone.

My interest in giant squid continued after I arrived at JU and heard that a dead specimen had washed ashore in St. Augustine many years ago. After some research, (in the days before the internet and our now expected instant access to volumes of trivial facts), I discovered a newspaper article documenting the rediscovery of photographs of the St. Augustine Monster that first washed ashore on Anastasia Island in 1896.

In 1999 while browsing in a bookstore before boarding a flight, I discovered a book by Richard Ellis titled “The Search for the Giant Squid: The Biology and Mythology of the World’s Most Elusive Sea Creature.” My interest was rekindled in the St. Augustine creature.

A little more research led to various reports and documents detailing what initially was reported to be first a giant squid, then a giant octopus, but was, in fact, a large mass of whale blubber that had taken on the shape of a sea creature. Fortunately, samples of the flesh had been preserved at the Smithsonian and could be analyzed in 2005 using more modern techniques.

This brings us to a more recent set of events that has allowed scientists to video live giant squid in the deep sea. After hundreds of years of looking, in 2012 scientists observed for the first time, specimens in their deep-sea habitat off Japan. In June of this year, a giant squid was videoed in U.S. waters in the Gulf of Mexico.

The scientist who managed to do this amazing feat was Dr. Edith “Edie” Widder of the Ocean Research and Conservation Association (ORCA) in Fort Pierce.

Dr. Widder was recently honored with the Jacksonville University’s Marine Science Pioneer Award. This award is given to an exemplary leader in marine science whose visionary leadership has served as an inspiration to others, particularly students. This extraordinary individual fully embraces the University’s ideal of a lifelong learner, bringing to bear remarkable talents to create new opportunities to lead, live and learn.

Prior award winners were Robert Ballard, the oceanographer who found the Titanic and hydrothermal vents in the deep-sea, and Chris Fischer, founder of OCEARCH, the largest shark-tracking organization in the world and now explorer in residence at JU.

Dr. Widder, an expert on bioluminescence, or production of light by living organisms, was not trying to video a giant squid. She was experimenting with her electronic jellyfish, an apparatus with LED lights that mimicked a real deep-sea organism and carried a sensitive camera to record interactions with the elusive creatures it was designed to attract. What she has now done twice is document the giant squid that had eluded scientists and explorers for centuries.

Maybe next, she will try to document the even larger and perhaps more mysterious colossal squid. Who knows what now lurks in the deep dark sea that we have never seen?

What is the worst or most challenging part of being a marine scientist?

It may be the effort that has to go into obtaining funding to do the research that really interests you. Most scientists do not enjoy grant writing. Spending weeks writing a proposal to convince an agency, foundation or even an individual to give you money to do research is daunting. And the odds are against you. But sometimes, things in the universe align, the words ring true and with a stroke of luck — you get funded. Then it’s worth it.