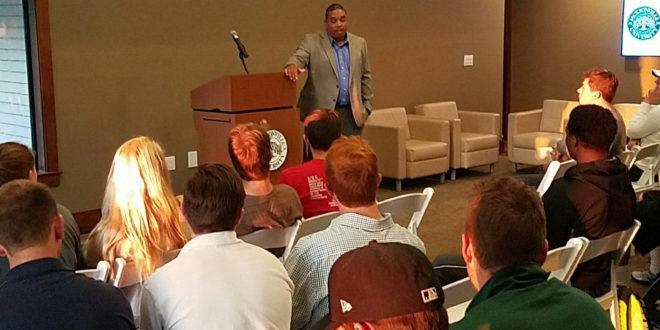 About 40 students from a variety of academic disciplines were able to get a real-life educational experience last week when Jacksonville Jumbo Shrimp General Manager Harold Craw spoke to the Sport Business Club.

Craw filled the River House attendees with an abundance of situations he has seen and he was able to connect on a variety of levels as he has a master’s degree in sport management from East Tennessee State. Students attending the event, arranged by Assistant Professor of Sport Business Dr. Todd Hall, primarily were from a variety of Sport Business classes, however, aviation, marketing and a plethora of other majors were represented.

In addition to giving a big picture look at the day-to-day operations, the 15-year veteran of minor league baseball offices spent much of his time talking about the team’s recent nickname change from the Suns to the Jumbo Shrimp.

Although the immediate furor from fans has calmed down, Craw said he “heard it all’’ initially.

“I realized how brutal Jacksonville can be,’’ he said. “We spent eight or nine months gathering information on the change and never considered any other name. I wouldn’t do one thing differently.’’

Craw acknowledged the fans’ love of the Suns.

“The Suns have a tremendous history and the Bragan family (the former owners) did a tremendous job creating that history,’’ he told students. “But, we wanted to build our own brand and that brand is ‘affordable family fun.’ Most minor league sports aren’t about what happens between the lines on the field. We (the local team) can’t control who they (the major league team) want at shortstop or second base, but we do have control over the fan experience.’’

“Our biggest issue last year was concession lines and we knew opening night we had an issue,’’ he said. “The lines were crazy and the waits too long. We will be adding points of sale next season.’’

He pointed out foods that sell (hot dogs, hot dogs, hot dogs) and talked of promotions the team tried, including College Football Night where the team gave away tickets to some of the most respected games of the season (read: Florida vs. Florida State, for example).

Craw also talked of careers with sporting teams and offered up suggestions on how to succeed.

“Getting into any aspect of the sports business is hard,’’ he said. “Get any internship you can and network. Once you get your foot in the door you don’t know what might happen.’’ He also suggested job fairs for the individual sports as a good way to get name recognition.

Following the talk, Craw offered up one more key piece of advice.

“I would always tell students to invest in themselves,’’ he said. “That’s where it all starts.’’

Hall, who also is looking for candidates for a new on-line masters level Sports Management program, enjoyed the turnout and interest from students, both his and the others who showed.

“Whenever we’ve had guest speakers on campus, the feedback has been positive,’’ he said. “To hear experiences outside the classroom is helpful and it definitely gets our students thinking about that next stage in life – gets them thinking about their career.

The new online Master of Science in Sport Management, which is pending approval of SACSCOC (Southern Association of Colleges and Schools Commission on Colleges), is an interdisciplinary program between the Brooks Rehabilitation College of Healthcare Sciences and the Davis College of Business. It is accepting applicants and will launch its inaugural class in January.