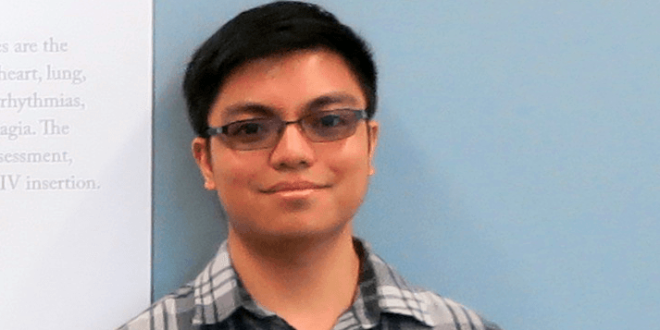 Meet Aldrich Ruiz, a senior majoring in computing science. Aldrich is a recipient of the STAR Center IT scholarship, which was funded by the Florida Entrepreneurism, Policy, Innovation, and Commerce (EPIC) Program at JU to develop electronic medical records (EMR) for the Simulation Training and Applied Research (STAR) Center.

How did you get involved with the STAR Center?
Last January, I received an email from one of my professors stating that the Brooks Rehabilitation College of Healthcare Sciences was looking for someone to develop software. I wanted to get more experience in a real-life setting, so I decided to go for it.

When I first spoke to School of Nursing Prof. Kathleen Kavanagh, she explained that they needed an EMR for the students to use in a simulation lab setting. When I learned more about what an EMR was, it was a matter of translating all of that data and putting it into a database. Early in the planning stages, we had to decide what language we had to write this in. There are a lot of different programming languages that have been developed that each have strengths and weaknesses, so we decided on using Java as it was a pretty universal object-oriented language that students learn. It would be easy for the next set of students to work on this to build off of. The other language we had to decide on was which query language to use. This was simple, as it was the only one we both knew, so we both decided on mysql to handle database information handling.

How did you develop the EMR for the STAR Center?
We met with professors who listed information that each thought was important to include in an EMR system. Pediatrics, Nursing Foundations and Psych are some of the sections we included in this iteration of the software. We started out the basic mapping of the database. What kind of information was universal with each patient admitted? Basic contact info served as the base of the expanding map that was the database. The specialized sections then started branch out and we had to link this to the base information. This quickly got messy, as some sections had hundreds of pieces of info to keep track of and link to a specific patient.

Developing the user interface is the next half of the work. Similar to the apps used on smartphones, we had to have something that the users would interact with to store information. You wouldn’t want someone who didn’t know how to program input information through a console. At this point, I was happy with using Java to develop this part of the project, because we could import libraries to make the data transfer process better. Each specialized section has its own page where users can note important info. Check boxes, radio buttons, and text fields were used to organize info that would be formatted to send through to the mysql database.

How did you become interested in computer science and programming?
Halfway during my senior year in high school, one of the other physics teachers went into my class during a break asking for people interested in joining a robotics club because they were short on members. I went in the meeting to see what it was about, and that was when I was introduced to the concept of coding. Not knowing a thing about coding, I joined straightaway, thinking “Hey, robots are pretty cool.” There were to be basically two groups within the club, the engineers – people who designed how the robot would look like, and the coders – people who would program the robot. Everyone wanted to be on the engineer side, not wanting to be the one to code. Knowing that the club wouldn’t do anything if there wasn’t a coder, I decided to do the job everyone else was reluctant to do. There was a one-day crash course on a modified c++ programming course specifically for robotics at UNF that I went to, and that was when I started to actually like programming.

What do you hope to pursue after graduation?
I’d like to pursue a job working with biology (or any other science really) people to develop software that can help with research, similar to what I’m doing at the SIM lab right now. That way I can learn other topics while programming as a job. I would also try to do some web development on the side just for fun. In terms of non-programming activities after graduating, I’m going to continue to improve on playing the piano and doing animation as creative outlets in my spare time.