Home » All Sections » Student Pioneers: 3 Dolphins Making Waves On and Off Campus 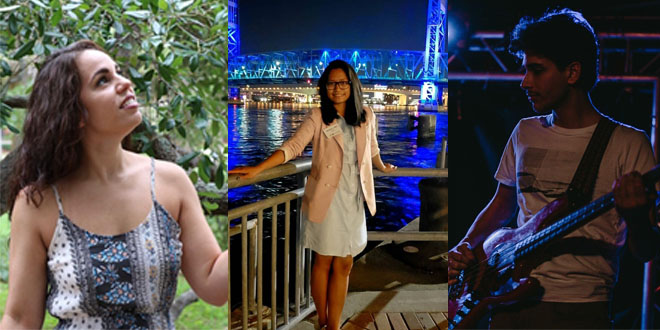 Student Pioneers: 3 Dolphins Making Waves On and Off Campus

Meet three JU students blazing new trails at Jacksonville University and beyond. Though their ages, majors, and backgrounds differ, each one of these outstanding Dolphins lives out what it means to be bold, smart, creative, and fearless. 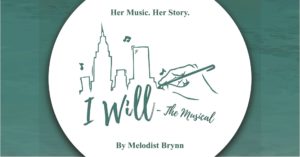 Brynn is a senior Music Composition major at JU. She performs in restaurants and other venues around Jacksonville and can be seen performing at the Downtown Jacksonville Art Walk and Porchfest under the stage-name Melodist Brynn.

Brittanie’s senior showcase will be held in Swisher Theatre on December 14, at 7:30, free and open to the public. Rather than just showcasing her compositions in a concert-style performance, Brynn wove them into a musical about her life showcasing not only herself, but current students and alumni from JU’s vocal and theatre programs, as well as quintets from JU’s orchestra, The Rivertones, and University Singers.

“This show is a way of giving back to JU,” Brynn said. “As a transfer student, my time here has been short and yet it has been very rewarding and fulfilling. I have learned so much and have been given countless opportunities to grow, not only a musician but as a human being. The professors and students teach me something every day and this show, hopefully, represents that.”

After she graduates in December, Brynn plans on applying for a Fellow position at JU’s Linda Berry Stein College of Fine Arts and hopes to stay in Jacksonville for one more year before attending graduate school. “I want to hone my craft through composition and voice,” she said. “I plan to use that year to figure out where I fit best in the music world and where to go next.”

Taylor is a junior Music Business major at JU. Raised by a family of musicians, Taylor plays multiple instruments, including guitar, which he plays for the local band Bobby Kid Taylor also plays bass and French horn, serving as principal horn in both the wind ensemble and orchestra at JU, as well as a member of the Kinne Honors Woodwind Quartet.

“Aside from performing, my biggest passion is producing and recording music,” he said. “I’ve been passionate about recording since high school and have recorded two records since.”

During his time at JU, Taylor has found another love for producing electroacoustic music while taking classes with Dr. Mark Snyder, who founded the Electroacoustic Barn Dance Festival and brought it to JU for the first time last year. “Dr. Snyder truly inspires me to perceive, create, and express music in a new way, and it’s led to new opportunities that I am so grateful for,” he said.

This year, Taylor was accepted to present an original piece, titled “Interdimensional Comb,” to two electroacoustic music conferences in West Virginia and Illinois. The festivals both consisted of students, professors, and industry professionals chosen by a board of directors. “Aside from the friends and connections these opportunities presented me, I’ve gained amazing experience through performing and hearing my piece in ways that I never imagined.”

After graduating next year, Taylor plans to continue recording and producing music in the roles of a studio engineer, producer, or composer. He added, “I would also love to take a season of my life after college to tour with my band, Bobby Kid, or my own solo project and make as many connections as I can.”

Reggie is a Resident Advisor (RA), admissions ambassador, and History major at JU. An active member of JU’s Rotaract Club for the last four years, Reggie has had many opportunities to volunteer her time and give back to the community. Her favorite project each year is Micah’s Backpack.

Reggie also collects non-perishable goods for the group and fundraises for the organization by selling T-Shirts and collects direct donations. “Being involved with this organization is a special opportunity because it’s so close to Jacksonville University and affects our surrounding community,” she said.

After graduating in the spring, Reggie plans to continue volunteering for various projects around the country. The first issue she plans on giving her time to is hurricane relief in North Carolina.