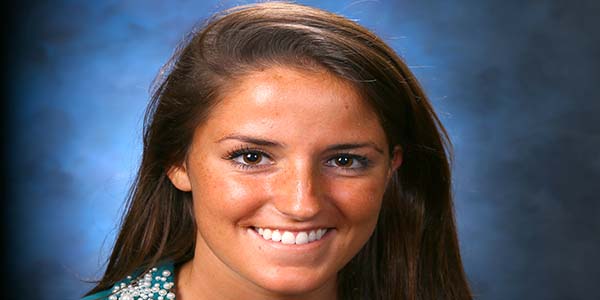 Hailing from Gambrills, Maryland, Alexandra ‘Ali’ Hoffman came to Jacksonville University because of the small classes and the personal attention she would receive in the classroom. As the 2014 Davis College of Business Undergraduate Student of the Year and Outstanding Undergraduate Student in Finance, Hoffman is pleased to be checking off the goal of attending graduate school at JU. Her reason for attending the MBA program at JU is the accelerated format where she can complete her Master’s degree in twelve months.

Another reason for choosing JU’s Master’s program is her familiarity with the JU faculty. Citing the advice and support she has received while in the Finance and Marketing programs at JU, she will be completing her MBA with a concentration in Accounting and Finance starting this fall. According to Hoffman, faculty such as Dr. Robert Houmes and Dr. Julius Demps, have been instrumental in her success. She feels her experience with instructors, who are seasoned professionals, is a huge benefit of a JU education.

“Ali personifies what is good about our students here at JU as she is inclusive, capable, respectful and hard working,” Houmes noted.  “Although she has achieved so much for one so young I know the best is yet to come.”

“Ali is a self-starter, model citizen and a dream student,” Demps acknowledged of Hoffman. “My life has been much better since I have been able to have her in my classes.”

This summer, Hoffman is serving as an intern in the Wealth Management division of Morgan Stanley. She realizes there is a large demand for graduates with work experience along with an education and she hopes to participate in an internship or assistantship while attending graduate school.

“My business core classes gave me a solid foundation in order to help me decide what path I would like to pursue in my career,” commented Hoffman.

“Ali strives to be her best in everything she does, which is why she is a great leader by example, on and off the field,” Coach Mindy McCord remarked. “She is a driven, self-motivated person which is reflective of the success she has accomplished as a student-athlete.” A highly decorated Women’s Lacrosse player, Hoffman is a two-time Atlantic Sun Women’s Lacrosse Student-Athlete of the Year, earning First and Second Team All-Atlantic Sun honors her last two years and was honored with Player of the Week this past year. Hoffman was named to the All-Conference Tournament team and Conference Scholar during her junior year. Last month, Hoffman was added to the CoSIDA Academic All-District Team for the second straight year. Her presence will be missed on the field next season.

A member of the inaugural Advantage Business Magazine “Top 40 Talent” of the Davis College of Business, Hoffman is sure to be a success following her graduate studies. The annual list honors the top business students at the undergraduate and graduate levels at Jacksonville University. “I felt honored to be surrounded by many intelligent and accomplished people,” Hoffman explained of the event that occurred last November. In addition, she was honored as the Beta Gamma Sigma scholarship recipient for an essay, her GPA and her contributions to JU.

As for future plans, Hoffman has decided to leave things open and see where life takes her. One thing is for certain, she will be back on the banks of the St. John’s River come August. “Ali can do just about anything she wants to,” added Dean Don Capener of the Davis College of Business. “She has the drive and intuition to make a successful business person.”