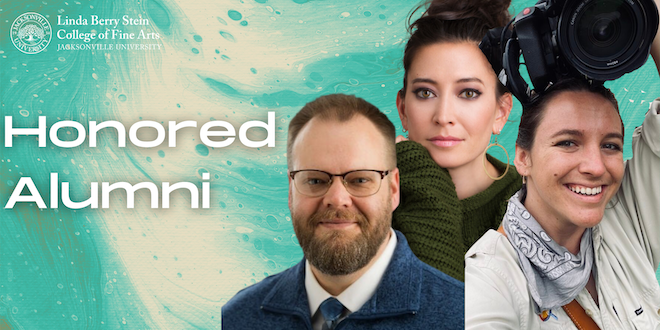 For the last five years, the Linda Berry Stein College of Fine Arts has selected alumni to honor from its graduating classes in recognition of distinguished accomplishments in their fields. From the visual and performing arts to media arts and the humanities, graduates of the Stein College are dedicated to making an impact on the world around us.

Sherri Chung is a singer, songwriter, pianist, and composer for film and television. She currently co-composes the scores for “Riverdale” and “Batwoman” on The CW Network. Her other recent shows include: “The Red Line” on CBS, produced by Greg Berlanti and Ava DuVernay; and “Blindspot,” which just completed its fifth and final season on NBC.

Her latest film, “The Lost Husband,” is currently streaming on Netflix and was recently picked up by Universal Pictures for international distribution. Her last Warner Bros. film, “Nancy Drew and The Hidden Staircase,” was released March 2019 in theaters nationwide.

Chung’s compositional work includes both songs and scores for TV, films, documentaries, commercials, musicals and music libraries. One of her documentaries, “The Other Side of Home,” was shortlisted for the 2017 Oscars for Best Short Documentary. Chung is a longtime collaborator with composer Blake Neely, and their work includes scores for “Arrow,” “The Flash,” and “Supergirl” on the CW Network, as well as DC Entertainment’s “Legends of Tomorrow,” and Netflix’s “You.”

A singer for as long as she can remember and a classically trained pianist since age five, Chung’s first compositions were songs she wrote and sung at the piano. She continued playing, writing and performing through high school, furthering her musicianship with studies in trumpet, guitar and conducting. Around age twelve, heavily influenced by music for movies, Chung turned her focus to studying orchestral music. She continued her training through high school, attending prestigious music camps and music intensive workshops before heading to Jacksonville University.

Sherri graduated Magna Cum Laude, receiving a bachelor’s of music in composition and theory, with a piano principal. During her time at JU, Chung became president of the Chamber Singers and president of the JU chapter of Mu Phi Epsilon music fraternity. After graduating, she began teaching private piano lessons and continued writing, producing and performing her songs. After scoring several films and releasing her second album, “No Small Thing,” Chung relocated to Los Angeles where she attended the University of Southern California’s Scoring for Motion Picture and Television graduate program. While there, she studied with some of the industry’s most successful composers and orchestrators, and was selected for a mentorship with Randy Newman. She has also gone on to attend many of the film industry’s prestigious workshops, including: The Sundance Institute’s Film Music Program, the American Society of Composers, Authors and Publishers’ Scoring Workshop with Richard Bellis, the BMI Conducting Workshop with Lucas Richman, and the Los Angeles Film Conducting Intensive.

At the start of her career, Chung began assisting composer Walter Murphy and continued as an orchestrator for his shows, including “Family Guy,” “American Dad!,” and “The Cleveland Show.” As a singer, Chung’s recordings for films, commercials, trailer music, and television caught the ear of composer Blake Neely who hired her to sing on his scores for ABC’s “Resurrection” and CW’s “Arrow.” Her voice can also be heard on NBC’s “Blindspot” and the Netflix documentary series “The Keepers,” which was nominated for an Outstanding Documentary Emmy Award. She also conducted both of these scores.

In 2015, Neely hired her as a composer to collaborate on his score for CW’s “Supergirl,” launching their longstanding artistic partnership, which has often resulted in collaborations on other television shows. With her scores for hit shows “Riverdale” and “Batwoman,” as well as the Warner Bros. film “Nancy Drew and The Hidden Staircase,” Chung has made her mark in the industry as a prolific composer and unique talent, garnering attention in 2020 as one of Variety’s 10 Composers to Watch.

Chung’s upcoming projects include an animated series produced by Amblin for HBO Max and a new live action show on the CW, both set to premier in mid-2021.

Natassja Ebert currently works as a freelance cinematographer and photographer based out of New York City. She was initially a dance major when she came to Jacksonville University and was greatly involved in the program — from participating in shows, to choreographing her own pieces. Ebert began incorporating film into her studies her freshman year, filming sports for ESPN3 on campus. Ebert received the Linda Berry Stein College of Fine Arts Interdisciplinary Award in both her sophomore and senior year for her involvement with dance and film. Her fellow dancers were her first loyal film subjects!

The ESPN3 work study program threw her into the world of film, from laying down cables to learning how to white-balance on volleyball nets. She was with ESPN3 for three years, which led her to employment in the NBA Summer League in Las Vegas and the 2019 NFL Draft in Nashville.

Ebert has also worked with production houses including: The Color Production House and Gesundheit Media, working on projects for the Associated Press, USA Today, Visa, Morgan Stanley, and Microsoft, among many others.

Ebert is now focusing on humanitarian storytelling, and her work involves filming for non-government organizations as they bring aid to crisis zones worldwide. She documented the Bahamas after Hurricane Dorian for World Central Kitchen and the COVID-19 response in New York City during the lockdown from March through September 2020. While working with World Central Kitchen, her footage was used on The TODAY Show and for the America Food Fund, a campaign shared by former President Barack Obama and Leonardo DiCaprio to fundraise for food organizations across the United States.

Ebert is also in production on a film about Chef José Andrés, a feature film directed by Ron Howard and partnered with National Geographic. She continues to lead stories on food scarcity, documenting pivotal moments of this pandemic and assisting producers as they piece together the current crisis aid narrative.

Currently, Ferris is an Assistant Professor of English at the University of Findlay where he has taught since 2016. Instructing a variety of undergraduate and graduate courses, Ferris’s passion is in digital and multimodal writing and understanding how styles evolve in society. Primarily, Ferris’s research interests involve the study of sonic rhetoric, critical pedagogy, and the public sphere: considering how sound shapes perception.

Likewise, Ferris’s most recent co-authored publication, ‘How the Compositional Affordances of Music Shed Light on Community, Identity, and Pedagogy’, is a born-digital, multivocal ‘symposium’ that examines music as both a compositional element and a metaphor for understanding the writing process in social justice work. His doctoral dissertation focused also on music and social change, analyzing four case studies of American folk music and public pedagogy.

Ferris also serves as a reviewer for multiple journals in the field of Rhetoric and Composition and serves on the editorial board for the journal Kairos: A Journal of Rhetoric, Technology, and Pedagogy. In addition to his academic and scholarly work, Harley develops and facilitates podcasting workshops with StoryCenter, providing writing instruction and consultation to participants all over the world. His latest podcast, titled Fools in Wonderland, launched in September 2021. Its theme is “chasing everyday creativity,” and it documents the process of trying to understand what our creative frustrations are, where they come from, and what we can do about them.