Home » Topics » Academics » Speech-Language Pathology: A Program on the Rise 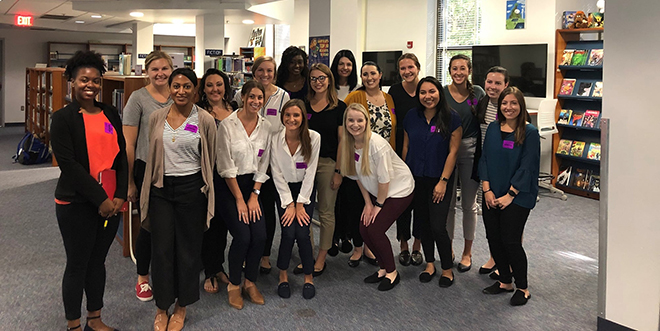 Speech-Language Pathology: A Program on the Rise

A king who stammers? That simply can’t be. How can he possibly be taken seriously? How can he lead?

These were the sentiments at the time of King George VI as portrayed in “The Kings Speech.” It took the dedication of a speech-language pathologist to correct his stammer and give him the confidence to communicate to the entire British Empire.

From world leaders, like the king, to preschoolers with difficulty learning how to express language to individuals who suffer a stroke and patients with Alzheimer’s, people at all stages of life have benefitted from the unique type of therapy speech-language pathologists provide. “I’ve thought a lot about how many people I’ve worked with clinically over the years and how many students and how many lives that’s impacted, and it’s mind-boggling,” said Judith Wingate, professor and Chair of Jacksonville University’s Department of Communication Sciences and Disorders.

In her current role, Wingate has been responsible for growing the university’s speech-language pathology programs, and she has done just that. Under her direction, the Master of Science in speech-language pathology has become a program on the rise. Started in 2014 and now fully accredited by the Council on Academic Accreditation, the program has steadily increased enrollment, and beginning this fall, it will expand to JU’s Palm Coast site in order to accommodate additional applicants and fill a need for the profession in that area.

Many of the students enrolled in the master’s program have come from Jacksonville University’s own undergraduate speech pathology program, which has also grown steadily since its inception in 2013. At that time, the program was directed by current JU Provost Dr. Christine Sapienza.

As the only university in the region to offer a master’s in speech-language pathology, JU has assembled an impressive group of faculty members, two of whom hold office at the state level in the Florida Speech-Language Pathology Association. Assistant professor Wyndi Capeci is vice president of educational services for the association and professor Dr. Robin Edge is vice president of professional practices in speech-language pathology. The master’s program has also been accredited since 2018 by the American Speech-Language-Hearing Association.

Before graduating from the master’s program, JU students must complete 375 clinical hours, which was a challenge in the last year, as COVID caused closings throughout the country. According to Wingate, many colleges and universities had to delay graduations for their speech pathology students because clinical placements were on hold. However, this was not the case at JU.

“We were very lucky to have our entire cohort graduate on time,” Wingate said. “While it was a struggle, we really were creative, and we were able to substitute in active learning via telehealth and simulations to get everyone satisfactorily completed.”

One of the more creative approaches to student clinical hours involved the hiring of actors who simulated a person who had aphasia, which is the loss of language that can affect individuals who have had a stroke. Students would then follow the actors from evaluation through a month of speech or language therapy under the watchful eye of faculty utilizing a telehealth platform.

In normal years and under normal circumstances, JU students provide an average of more than 20,000 clinical service hours to the local community. These clinical hours are possible, in part, because of the university’s strong healthcare partnerships. Over the years, Brook’s Rehabilitation, Mayo Clinic, Ascension Health (St. Vincent’s), Jacksonville Speech & Hearing Center, Duval and St. Johns County schools, and other organizations have, not only provided clinical service hour opportunities to JU students, but have frequently hired them upon graduation as well. These strong ties have contributed to a 98 percent employment rate for graduates of JU’s speech-language pathology master’s program.

According to the U.S. Bureau of Labor Statistics, “Employment of speech-language pathologists is projected to grow 25 percent from 2019 to 2029, much faster than the average for all occupations. As the large baby-boom population grows older, there will be more instances of health conditions that can cause speech or language impairments, such as strokes or dementia.” In addition, the bureau reports that, “The median annual wage for speech-language pathologists was $80,480 in May 2020.” And every May this field is recognized during Better Hearing and Speech Month, which is sponsored by the American Speech-Language-Hearing Association.

These statistics make speech-language pathology an attractive career option, but for the faculty of the speech language pathology program and Jacksonville University, there is a deeper reason for entering and expanding access to this fast-growing field.

“I think most of us genuinely love what we do, or we wouldn’t be in the field,” Wingate said. “You have to love people and want to be of service with them, and to be able to expand that through our students is really exciting to see.”