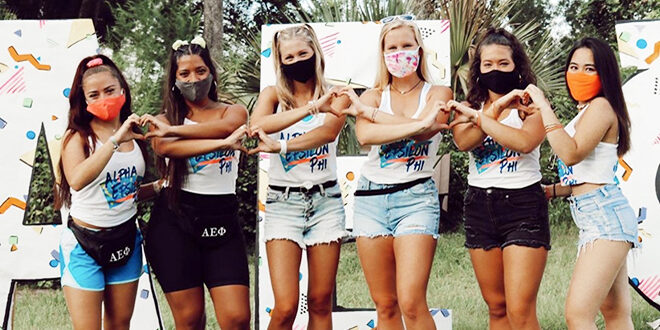 Sororities Focus on Leadership and Sisterhood

As Jacksonville University celebrates Women’s History Month, leadership is a theme reflected in many of the university’s events and awards. It is also a prized characteristic within the university’s sororities where sisterhood and growth opportunities help members rise to new heights. From programming to annual training on diversity, inclusion and hazing, JU’s sororities are setting high standards, and their presidents are leaders who are dedicated to changing the world around them.

“My now-big-sister was involved in the sorority at the time and invited me to an event. I didn’t quite know what it was or that it was for a sorority. But I enjoyed every second of it, and it really changed my perspective on what sorority life is. I was surrounded by women who didn’t fit or act like the stereotypes I’d seen before,” Smith said.

Since joining Gamma Phi Beta, Smith has been inspired to take on every leadership position available and has built a successful network with other sorority presidents. “I knew when I came here that I had a purpose. I wasn’t here to party. I was here to get an education and make something of myself.”

One of the main goals for any president is to oversee how their sorority functions from semester to semester. But what does that mean when it’s a sorority’s first semester back on campus? That’s the challenge Rebecca Knowles is facing as acting president of Gamma Eta.

After a seven-year hiatus, Gamma Eta is making a comeback at JU. Knowles calls the organization “her own little international network” because of all of the diverse connections she’s made since joining in 2012. Knowles loves meeting potential members, and over the years, she has been impressed by their diversity and the careers they enter after college.

“We have members in the Space Force and the military, as well as members that have won Emmys.” Knowles said.

Knowles is also a member of Gamma Eta’s international and local alumni networks. She credits the organization with helping her become more positive and well-rounded. “Gamma Eta kind of molded me and refined me to be the powerful and independent woman I am today. I have more self-confidence, better leadership skills, and a better outlook on life.”

Like Knowles, Alpha Epsilon Phi President Alyssa Holstein, ’22, credits her sorority with refining her character and skills as well, even though that wasn’t her original goal. When Holstein first joined her sorority, she was simply hoping to continue the same level of extra-curricular involvement she had enjoyed in high school.

“When I got here, I was used to playing sports, so I was looking for another group activity to fill that void. I’m also not the best at meeting new people, so I noticed how I felt like I could come in and take a deep breath when I met my now-sisters,” she said.

As Holstein continued her journey from member to president, she became more comfortable with the idea of meeting new people, leading her sisters, and one day training the next president. “The sorority definitely helped me grow my confidence,” she said. “I worked my way up to president, and now I can consistently lead our chapter meetings and interact with groups of girls, which is something I never saw myself doing from the beginning.”

For many women, the road to joining a sorority ends with finding a home, and that’s exactly what happened when Sarah Smith, ’22, joined Alpha Delta Pi in 2018. “I left my home in Conyers, Georgia, thinking I was going to be all alone,” she said. “So when I got here, I was determined to get involved and meet some people.”

The first thing Smith wanted to do was get involved with Greek life, and when she joined, she realized that she was surrounded by women who were on journeys just like hers. “I thought Georgia was far, and here I was meeting girls who were from Vermont and are now my roommates,” she said.

Alpha Kappa Alpha President Shakaila Brown, ’21, remembers her sorority journey as a humbling experience. “I’m grateful to have the opportunity to help other like-minded women along and to show them how I see things. It’s a very happy moment for me to be able to uplift and support others,” Brown said,

Brown describes herself as a humanist, and when asked what Women’s History Month means to her in this current climate, she had this to say:

“Women are rocking it right now, and my biggest aspiration is to help more of them along.”

While Brown and her fellow presidents may represent different sororities, they share several common goals. These include helping women like themselves to serve others, develop as leaders and encourage a spirit of sisterhood. For them, sisterhood is not about blood. It’s about supporting one another as sorority members and as women, and this is a lesson they will take with them from campus to their careers and beyond.