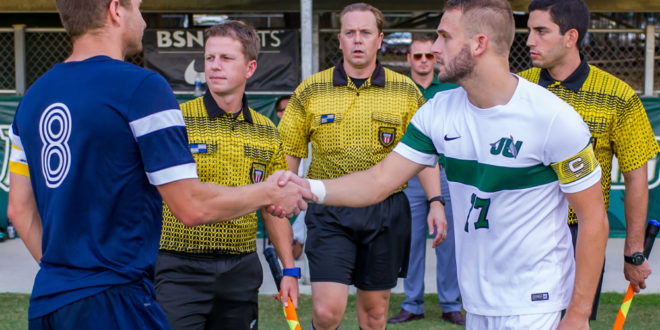 Soccer Captain Jack Burns has been out front on his blog about how to handle the stresses of college life.

Jack Burns is entering his second year of captainship for the Jacksonville University men’s soccer program. He has appeared in 45-plus matches for the Dolphins. He has recorded 10 points in his collegiate career. And, last year, he struggled to cope with stress.

“It’s vague in my mind,” he penned in a blog titled “All But Alone,” “but there was one day where I had just enough of answering the ‘How’re you?’ with the predetermined answer of, ‘Yeah, fine. You?’

“One day instead, I carelessly said, ‘No, not really.’ The best three words to exit my mouth in months. It’s here where things started to change.”

The stressors of living nearly 4,500 miles from his Portsmouth, England, home, coupled with the demands of balancing soccer and academics, left Burns feeling overwhelmed and alone.

It’s an internal battle often quietly faced by many college students and student-athletes around the world.

All But Alone
In three years’ time, Burns has compiled quite a resume: captain of a Division I soccer team, vice president of the Jacksonville University Student-Athlete Advisory Committee, member of the Jacksonville University Sports Business Club, a Davis College of Business Top 40 student, and student-athlete representative on the JU Board of Trustees.

Wearing so many hats, it became increasingly tough to maintain the guise of happiness. 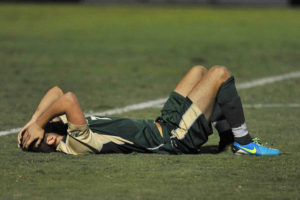 For Jack, coping required two things – honesty and outreach. They occurred the moment he admitted to himself and others that all was not OK.  After identifying the causes of his stress, Burns not only spoke with his family and friends for guidance and listening ears, he also reached out to his head coach Mauricio Ruiz.

“Jack is one of the main reasons why our team culture is as strong as it is,” said Ruiz. “It certainly made me reevaluate my approach with our student-athletes. Even someone as strong and independent as Jack, who seems to be doing so well on the surface, can still be going through their own internal struggles.

“I was not aware that he was going through as much as he was. At the end of the day, these kids are under so much pressure and it’s our job as mentors to be there for them and continue to guide them through their obstacles.”

Sharing his story on Sonder’s Secret, a blogging site Burns shares with former JU softball player Sable Lee, led to an outpouring of support. Ironically, while millions of people struggle to cope with stress, there is a stigma attached to discussing it and other mental health issues.

“All But Alone,” which can be read here in its entirety, has been shared by several student-athletes, Jacksonville University Athletics, and the ASUN Conference. Jack’s hope is to remove the stigma through conversation and education.

Jacksonville University Athletics realized the need for athlete support a few years ago.

Before the start of the 2015-16 academic year, Doug Frye, the Dolphins’ Director of Sports Medicine, sat down with an outside source to pilot performance psychology coaching for student-athletes. It worked out well for those who utilized it, but was difficult to schedule.

Those issues were erased with the assistance of Dr. Derek Mann and Dr. Jason Orrock, faculty members under the umbrella of the Jacksonville University Brooks Rehabilitation College of Healthcare Sciences. 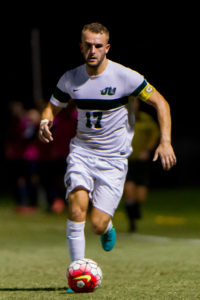 In casual conversation, Frye spoke with Burns on the impending relationship and in return, the Dolphin captain showed Frye his blog piece.

“After meeting with Dr. Mann and Dr. Orrock, we realized we were all on the same page and had the same goals,” said Frye. “I spoke with Jack about what we were looking at doing and how we were going to implement it. That’s when he showed me the blog.

“From that point, meetings became more frequent and the discussion opened up on moving forward immediately.”

Mann, a professor in sport psychology, and Orrock, a professor in mental health counseling and marriage and family therapy, now serve as performance and wellness coaches specifically for student-athletes.

“We live in a high-achievement world,” said Orrock. “Many of our student-athletes rise well before the sun for practice, weight training, and film, and then meet their other academic demands for the day. Dr. Mann and I are here to assist with how they manage all of the moving pieces, while maintaining their passion and excelling in their sport.”

In addition to student-athlete coaching, conversations on wellness, mental toughness and resilience are also being extended to JU’s coaching staffs.

Frye believes team talks and periodic meetings are breaking down the stigma, while also equipping coaches and athletes on what signs to look for when dealing with stress. The university shares those sentiments, and as such, Student Life trains its staff members and resident advisors to have a watchful eye.

Kyle Fessenden, M.A., a counselor and outreach coordinator at Jacksonville University’s Student Counseling Center, listed changes in focus or concentration, appetite, sleep and behavior as a few general signs, but also noted those changes must occur from a baseline.

“There are physiological signs to stress that aren’t seen by the naked eye, but there are also visible cues, and this is where relationships are so important,” said Fessenden. “Everyone is going to be a little different; everyone eats a little differently and sleeps a little differently, but equipping coaches and teammates with the signs is great because they spend the most time with each other to notice the changes.”

Fessenden joins professionally licensed counselors Kristin R. Alberts, Ph.D., and Jennifer King-Weldon, Ph.D., in the SCC as mental health resources for students and student-athletes alike. They specialize in stress management, individual and group therapy, and crisis intervention, and services are free and confidential.

Fessenden, who is also certified to assist with aspects of sport psychology like heart rate variability training, has worked with Dolphin student-athletes in the past, and continues to do so on a team and individual basis.

The SCC also offers a relaxation program that includes access to a massage chair and relaxation biofeedback programs.

When coping with stress or other mental health experiences, students and staff are encouraged to reach out to Student Life or the SCC as resources.

Stress – It’s Not a Dirty Word
Stress isn’t a dirty word, and with the ever-increasing demands of the world, Jack’s message shows it is okay to be stressed, and more importantly, it is perfectly OK to ask for help.

A lot of folks, especially nowadays, have shifted their thoughts on stress,” continued Fessenden. “Our beliefs in how stress impacts us are huge in determining how we react to it. Are we afraid of the response or do we look at it as our body giving us energy to confront a challenge?”

“There’s almost this assumption that when we are stressed out, we can’t succumb to it because it makes us look weak or vulnerable. And depending on how we view vulnerability or weakness, we can go above and beyond to try to avoid those feelings. We will seclude or isolate ourselves and maybe not be genuine when saying ‘Hey, I’m OK,’ when we really aren’t. Having to come to terms with that is incredibly difficult. But for students, like Jack, who can tap into their courage and overcome the barriers to sharing their struggles, it can have an invaluable impact not just for themselves, but for those who the experience is shared with.”

Like many of us, Jack is a high achiever who faced a real-world experience.

“Just through writing this blog I hope to bring some attention to the topic,” Burns’ blog continues, “and tell those who may be struggling to seek help. You’re all but alone.”