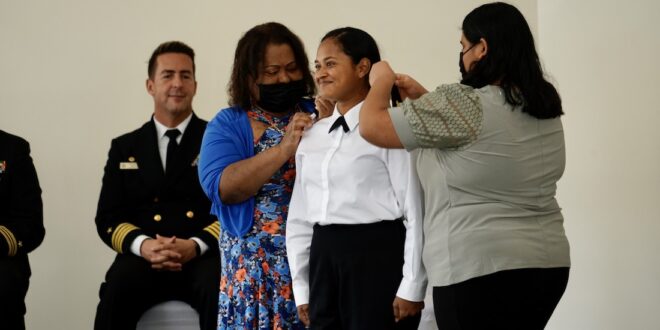 Ensign Jennifer Loyd receives a piece of her uniform from family members.

Receiving their pin at the Nurse Pinning Ceremony on Nov. 19 was the second life-changing event of the day for six Jacksonville University graduating seniors.

Earlier that day, they were commissioned as officers into the U.S. Navy. In a few weeks, they will head off to their first orders as Navy nurses.

All six had completed prior service in the Navy and had differing inspirations for becoming a nurse, but shared a common thread: wanting to earn a nursing degree to give as many people as possible high quality healthcare.

“My dad died at a really young age, and the nurses he had and the care he got kind of inspired me to go further,” said Petty Officer First Class Travis Van Houten. “I was a corpsman on the medical side in the Navy but I wanted to further my education and help as many people as I could going forward. This was the best way I could do it.”

Family, friends and mentors of the six officers attended the commissioning ceremony, which included taking an oath, presenting uniforms and the first salute.

Loved ones presented the graduates with pieces of their uniform. The commissioned officers then presented their first Silver Dollar Salute to an enlisted member who helped them achieve their commissioned status.

Later that day, the six joined fellow graduating nursing students at the Nurse Pinning Ceremony, signifying their completion of their nursing degrees.

The six completed the Medical Enlisted Commissioning Program in two years at Jacksonville University. Some did it while raising a family.

“A lot of lost sleep, sacrifices on my part and my family’s so I’m very appreciative that the opportunity was available to me,” said Petty Officer Jennifer Loyd.

Through the MECP, enlisted members can choose any college or university to complete their education.

Petty Officer Jazmine Printers, who was stationed at Fleet Air Control and Surveillance Facilities in Jacksonville from 2013 to 2017, wanted to return to the city to attend JU.

“I knew about Jacksonville University as a very military friendly school,” she said.

She’s served in the Navy since 2010, working as an air traffic controller. But she’s wanted to be a nurse since high school, she said.

“It’s kind of surreal,” Printers said. “It’s a big, big accomplishment. I didn’t expect this at 18 years old coming in. If I can do it, anybody can do it. I just want to be an inspiration.”

Her next stop is Balboa Naval Medical Center in San Diego, where she will join another graduate from her class, Petty Officer Rose Devallon.

“For me, it’s double responsibility,” Torres said. “Not only will we be learning a new job and taking care of patients at a new level than we’re used to, I have to learn new responsibilities. And I have to learn to lead sailors on a different level because as an enlisted member, there’s a different chain of command and other practices and customs that we’re not used to at the moment. It’s going to be a challenge, but it’s one that I’m looking forward to.”