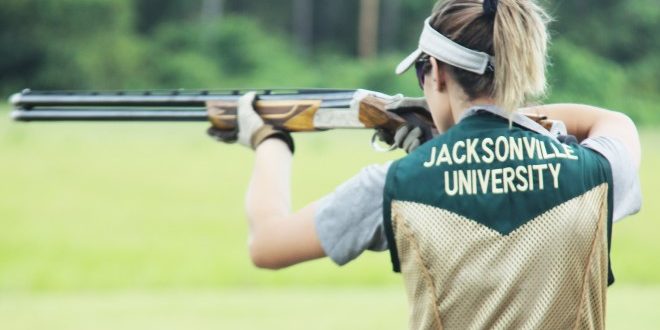 After 10 years, things haven’t changed much for the Jacksonville University Sporting Clays, Skeet, and Trap (JUSST) shooting team. They went undefeated between their inception and winning the national championship the first time they attended the Association of College Unions International (ACUI) Nationals in 2011. They continue to win national championship events today. Twenty-one, so far.

And founding Coach David Dobson keeps teaching team members the business and life skills that pay off in competitive success.

Coach Dobson holds master instructor certifications from the three top certifying organizations in the US, making him unique as the highest certified master instructor in the country. He also holds an MBA and expects his athletes to actively participate in the management and direction of the team’s affairs.

“The kids run this program. They’re the stockholders that run the company,” says Coach Dobson. “They own the marketing, the branding. They run the team practices. They’re learning to be independent rather than co-dependent. They help and support each other like a family.”

Coach Dobson serves as a mentor to all of the team members, including his assistant coaches and team captains. The team holds a weekly business meeting to deal with the details of team practices, competitions and other team affairs. In addition, because the program is designed to develop shooters into instructors, at least eight current team members are certified shooting instructors. They assist in coaching their peers during practices, which are held at Jacksonville Clay Target Sports on New Berlin Road.

“Growing as a teacher is expected in this program,” says current assistant coach and 2019 graduate Kelby Seanor, who is a former team captain and current member of Team USA Sporting Clays team.

All the mentoring, coaching and practice continues to pay off in competitive performance. At their most recent competition last summer at the Scholastic Clay Target Program (SCTP) national championships in Morengo, Ohio, the team won team National Championships in two major events across all divisions and finished in second and third place in two more. Additionally, team members Matt DeBord won two individual national championship event titles, and Zach Abbott won one.

“We’re the Alabama football of shooting,” says Dobson. “Our team members are incredibly professional, and we have a number of national and world champions on this team currently.”

Which is one of the reasons why the team grew from a club sport to full varsity sport status just a year and a half after its founding in 2009. The team averages about 40 members each year, both male and female. This year’s team, which holds a cumulative 3.1 grade point average, includes members who also compete in cross country, football, sailing and lacrosse.

Some team members, including Gabe, came to the team with little shooting experience.

“I shot twice before I met Coach Dobson. It was the most miserable thing I ever did,” Gabe says. “After that first lesson, the next time I picked up a shotgun, it was completely different.”

Other members, including D’Ayn Sayre, a senior English major, joined the team as veteran shooters.

“At the time I came here, it was basically me and three other girls on the team,” said Sayre, who spent several years shooting for a 4-H team in her Lake County, Florida, hometown before moving on to college. Two of her older teammates attended Jacksonville University, which made becoming a Dolphin an appealing alternative. But her choice ultimately came down to the beauty of the campus and Coach Dobson’s sale pitch.

“Even though I really wanted to get out of Florida for college, this was my favorite campus,” Sayre says. “David Dobson is a force to be reckoned with. He made a tremendous effort to recruit me.”

The team works hard to support itself financially. Team members pay $550 in dues each year to aid in  covering targets, shells, equipment, and travel costs for practices and competitions. Coach Dobson, who teaches wing-shooting classes in the Department of Kinesiology in the School of Applied Health Sciences, also solicits private and corporate donations, as well as writes several grants in order to keep the shooting team fully funded and able to attend and host competitions, including the Jacksonville Southeast Invitational Collegiate Regionals hosted by JU and SCTP which occur in the Fall and Spring. The Fall Southeastern Regional Invitational Shoot is scheduled for Oct. 20 at Jacksonville Clay Target Sports, and according to Coach Dobson, JU is expected to dominate this shoot as they have for many years. Fifteen collegiate teams will participate, showcasing some of the best competitive shooters in the country.

And after 10 years, Coach Dobson thinks he just might have gotten more out of coaching his hundreds of competitors than that they got from him.

“Working with these kids is the most fun I’ve ever had in my life,” Coach Dobson says. “These are awesome kids. I love this amazing university, our gifted faculty and staff, and most of all, these incredible students. I feel so blessed to be able to be a part of their life’s journey.”