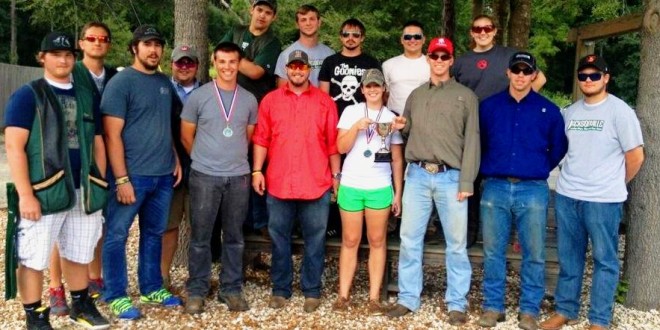 Emmanuel College took HOA (High Over All) Team by just 4 targets over runner-up JU, which also took third in the Sporting Clays portion of the Oct. 18-19 event. Rounding out the field for third, fourth and fifth were University of Kentucky, Clemson University and Embry-Riddle. ABAC, FSU and UNF filled out the balance of the collegiate field.

Many thanks to our Jacksonville University Sporting Clays, Skeet and Trap Team (JUSSTC), Jacksonville Gun Club volunteers and parents who refereed and did all else in between, as well as to Barbara Martin of Amelia Shotguns Sports for all of her efforts in our third Sporting Clays event on Sunday.

Money from the Scholastic Clay Target Program (www.shootsctp.org), funded by the Midway USA Foundation (www.midwayusafoundation.org), made the event possible. The shoot is hosted by JU and the SCTP and held every fall and spring at Jacksonville Skeet & Trap. More than 225 colleges and universities have Clay Target Shooting Teams/Clubs. All teams compete just like varsity programs, with no distinction, and are represented by Divisions I, II and III, but are not NCAA (by design), depending on program size. The schools in the Oct. 18-19 shoot were all Division II schools.