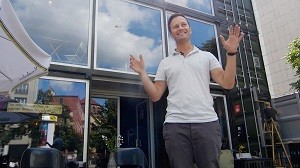 A look at the 2004 Graphic Design alumnus’ LinkedIn page offers a summary oozing vision and ambition: “Serial entrepreneur and innovative thinker who can participate in any business process from backend development to design to business strategy. Looking to change the world through technology and disruptive ideas.”

The early part of the resume for Todd, 32, looks reasonably normal, if not completely conventional: Senior-year semester studying abroad; Backpacking through Europe; Full-time job at an advertising agency.

Then comes the stirring:

Earlier this year, in perhaps his biggest stir yet, Todd led efforts to expand annual crowdfunding festival One Spark into Berlin. Founded in 2013, One Spark offers opportunities for private investment in projects as well as speakers, music, and entertainment.

“I always had the attitude that I could do something better and a drive to think creatively about problems,” said Todd, managing director of the daylong event, which was held in September. “This made it hard to work in corporate jobs, so I often sought out small creative teams to work with instead of big organizations.”

That drive to create in small teams, often working out of tiny cluttered offices in old buildings or in his own living room, has sparked the attention of those in the know about what it takes to be an entrepreneur.

“Travis has a great ability to build community. This skillset was critical in building networks and both grassroots and top-down support for One Spark in Berlin,” said One Spark co-founder and CEO Elton Rivas. “He saw the opportunity for a new type of event in Berlin; something that would help connect the creative community. As a serial entrepreneur, he may not have known all the ins and outs of creating, managing and producing an event, but the bigger skillset of turning an idea into execution was critical to the success of One Spark Start: Berlin.”

Meeting or exceeding its goals for its first year, the crowdfunding event, drew more than 5,000 attendees, had about 200 creators register, and included about 35,000 euros available for cash prizes and awards.

“I’ve always been an entrepreneur; I just didn’t realize it until much later in my life. I was always figuring out ways to do things myself and fix problems, whether that was coding websites, working on cars or founding companies,” Todd said. “When the idea of One Spark came on my radar, all the pieces fell into place – we could support the creative community and help them find the funding they lack all in a format Berlin was used to: a party.”

We caught up with Todd to get his take on One Spark, crowdfunding, entrepreneurism and inspiration:

I did a semester abroad in Reading, England, during my senior year at JU. While there and for a few months after graduating I did a lot of backpacking throughout Europe and fell in love with the culture and mentality on the continent. In 2005 I had made plans to go to Germany for the 2006 World Cup, then I met my now wife in New York City on New Year’s Eve. After that trip I started making plans to move to Europe for a while. My wife (then girlfriend) obviously convinced me to try Berlin. I didn’t think I’d be here for more than a few months but have now lived here for seven years!

How is One Spark Start: Berlin different from One Spark in Jacksonville?

For one, it’s smaller. It’s only one day, in one venue, and the creators are chosen by a jury, not by the venues. Other than that, the dynamics and mission are the same. We want to connect really creative ideas with the resources they need to succeed. We’ve tried to stay as true as possible to the “Party with a Purpose” format of the original One Spark, but tweaking a few things here and there that make sense for this market.

What drew you to One Spark and entrepreneurism?

I’ve always been an entrepreneur; I just didn’t realize it until much later in my life. I was always figuring out ways to do things myself and fix problems, whether that was coding websites, working on cars or founding companies. In fact, I founded the JU Surfing Club! … Cut to seven years later and I’ve worked with a lot of young businesses in Berlin and founded a few of my own. All along I met people in the startup community who came to Berlin because they could still enjoy music, art and culture while working in tech. It was this community that I wanted to support and give back some of my knowledge to. Berlin is a unique city. It has an incredibly vibrant creative scene but one of the lowest GDPs for any major capital city in the Western world. When the idea of One Spark came on my radar, all the pieces fell into place – we could support the creative community and help them find the funding they lack all in a format Berlin was used to: a party.

What is the landscape like for entrepreneurs in Europe compared to the U.S.?

It’s getting better. Americans are born and bred on the “You can be anything you want” idea. Naturally this leads to some problems with entitlement, but if you’re in any way entrepreneurial, this nurturing gives you a significant leg up. That, coupled with the general optimism of Americans, gives us a slight natural advantage. Then the regulations on small businesses are much more flexible and friendly in the U.S. But Europe is catching up. The risk-averse nature of Europeans is slowly fading as a new generation of globally minded, technologically savvy kids are coming into their own. More investment capital is also looking at Europe. That, coupled with a good social infrastructure and a stable economy, makes for a nice business environment. The only downside is startups move very fast and usually the tortoise in the race is the government, so running a small company and dealing with old European bureaucracy can often be extremely tedious.

Is crowdfunding the future for startup ideas, particularly smaller ones?

Well, I wouldn’t say it’s “the future” but it is definitely disrupting the way startups find investment. Crowdfunding allows young companies to skip the angel investment round while adding a ton of extra value they wouldn’t have gotten with pure investment. Having raised investment myself, I know the early rounds can often be the most stressful, as you’re giving away a large percentage of your company for not much more than an idea. Whereas if you run a successful crowdfunding campaign, you’ve likely kept a lot more equity, learned a ton about marketing your product and built a community around your idea. That’s much more valuable than gaining a couple board members. Crowdfunding won’t replace all the investment stages in a company, but it does provide an amazing tool to add to the mix for young companies.

JU was an interesting place for me. … If you were self-motivated and eager like me, you had direct access to your professors. And if they recognized your eagerness (9 times out of 10 they do), they would give you special projects and extra instruction to drive you. I also think having such a breadth of education really helped me in my entrepreneurial life. So much of success is driven by personal connections with people. So if you can drop easily into a conversation about art history or biochemistry, you’ll make much stronger connections. I think a liberal arts education gives you this capability.

Learn more about One Spark at https://www.beonespark.com. Follow Travis Todd at http://instagram.com/travisjtodd and on Twitter at @travisjtodd.