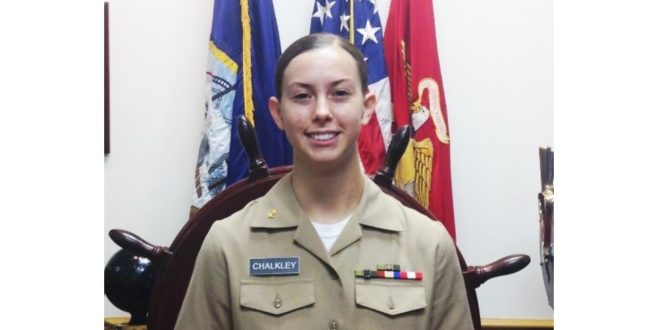 It won’t be long before senior Misha Chalkley is submersed in all things nuclear as the first female JU NROTC Midshipman to earn a highly competitive post as a U.S. Navy Submarine Warfare Officer.

Of 67 NROTC units with applicants nationwide, only 14 billets were awarded to females this academic year by the U.S. Navy for the Submarine Warfare program, which offers a challenging career in an elite, technically advanced community with multiple missions. 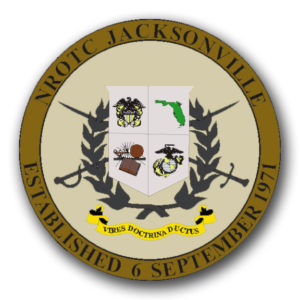 Upon commissioning this spring, Chalkley will undergo a year of training, the first six months at the Nuclear Power School in Charleston, S.C., and the second in hands-on training at a Navy shore-based reactor training facility in New York or Charleston. After three months of Submarine Officer Basic Course in New London, Conn., she’ll be assigned as a division officer managing trained enlisted submariners, continue her own qualification program, and finally earn a Gold Dolphin and designation as “Qualified in Submarines.”

Chalkley, a Physics/Mathematics double major in the College of Arts and Sciences, credits her success so far to a strong upbringing and dedication to her responsibilities.

“I got to this point with an open mind, loving family and strong work ethic,” she said. “I look forward to what will come next.”

The recent milestone is just one of many for Chalkley, a Jacksonville native and Stanton College Preparatory School graduate who grew up in San Marco and now lives on the Northside. She began her college career at JU in 2014 and was inspired by the military service of her grandfather and brother, both of whom served in the U.S. Navy, to become a member of the JU Naval Reserve Officer Training Corps Unit.

She quickly impressed staff at the NROTC Unit during her freshman year, and earned a National Navy Scholarship, enabling her to continue in the NROTC program through college and culminate in a commission as an Ensign in the U.S. Navy.

In fall 2014, Chalkley was selected as Delta Company Honor Member of the Semester. Because of her character, military discipline, leadership ability and patriotism, she earned the National Society of Daughters and Founders and Patriots of America Award in the spring 2015 semester. Other honors include multiple American Legion Scholastic Excellence awards, the JU NROTC Battalion Academic Excellence award each semester, and the JU NROTC Battalion Leadership award during spring for her mentorship and leadership in the unit.

Her strong performance including near-perfect GPA culminated in selection as the JU NROTC Battalion Commanding Officer for the 2017-18 academic year — the highest leadership position a midshipman in the NROTC program can earn.

Chalkley hasn’t been a standout just in NROTC. She’s been an active member in many campus clubs and activities, including tutoring for the University and the JU NROTC unit; membership in the Society of Physics Students and serving as its treasurer, vice president and president; membership in the Green Key Honor Society and serving as its president; serving as secretary for the Omicron Delta Kappa Honor Society Secretary; and participating in JU’s Mathematics, Engineering & Physics Scholars (MEPS) program.

NROTC top staff say they are proud to call Chalkley a member of the Unit, and that they have no doubt she will represent JU and the JUNROTC Unit with pride, and make the Navy and submarine community a better place to live and work.