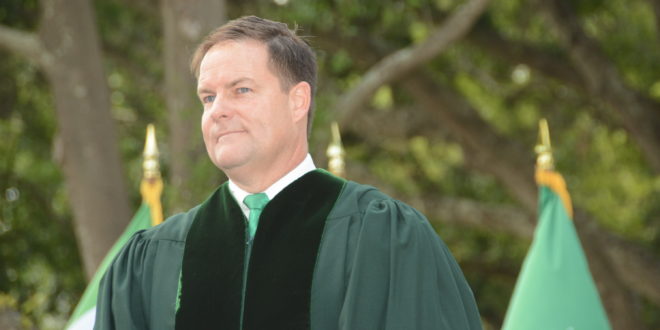 Florida Sen. Aaron Bean ’89, who told JU Spring 2017 graduates at commencement to take on the world with the “superpowers” of taking action and uplifting others, has been named to the “presidential honor roll” by the Independent Colleges and Universities of Florida.

The ICUF released the honor roll list to thank lawmakers it says were instrumental in the historic increase in student financial aid in the 2017 Florida legislative session. During the last session, lawmakers increased need-based student aid by 81 percent and merit-based aid increased by 79 percent. They also expanded the Bright Futures scholarships to cover 100 percent of tuition.

“It is an honor to be listed on ICUF’s honor roll as we all work together to increase opportunities for Florida students seeking higher education,” said Bean, who earned his Bachelor of Science in Finance from Jacksonville University’s Davis College of Business. “Florida is fortunate to have so many choices when it comes to higher education and I am glad to be a part of the process that can provide a positive impact for students.”

Bean delivered the keynote address at JU’s most recent commencement on April 29, and received an honorary degree of Doctorate in Civic and Community Leadership for his dedication and service to his district and its residents. He serves Florida Senate District 4, which includes Nassau County and parts of Duval County, and was first elected to the Senate in 2012. Bean was re-elected without opposition in 2014 and 2016 and is currently chair of the Appropriations Subcommittee on Criminal and Civil Justice.

This is the second year the ICUF has released the presidential honor roll list. The organization serves more than 150,000 degree-seeking students at about 30 private, not-for-profit schools, including Jacksonville University, Edward Waters College and Flagler College.

This report contains material provided by the Independent Colleges and Universities of Florida.