He was born in Long Branch, New Jersey, in the same hospital as Bruce Springsteen. Not only that, he attended the same high school as another rock-and-roller, Huey Lewis. Laughing, he said, “Other than my beautiful wife, those are my only claims to fame.”

But that’s not the whole story.

In fact, the Wodehouse name is now synonymous with education, philanthropy, and innovation at Jacksonville University.

Charles “Chuck” Wodehouse, Jr. and his wife Camilla “Cami” need no introduction on the JU campus. Chuck served as president of the former University Council, was the initial Chairman of the Davis College Advisory Board, and served for 18 years on the University’s Board of Trustees. He joined the board years after the tenure of  Dr. Frances Bartlett Kinne’s tenure as university president, during a period he describes as a time when the University needed renewed leadership to address issues with student recruitment and retention, University finances, and a JU brand that no longer reflected JU’s unique educational offerings.

One might assume that his motivation to step up as a University advocate came from his time as a student at JU. But that’s not the case.

Graduates of the University of Virginia, Rutgers University, the University of Pennsylvania, and Sweet Briar College collectively, Chuck and Cami do not have a typical alumni link to JU. Their engagement and philanthropy comes from pure intentionality and commitment.

“My dad worked as a lineman for a phone company and later retired as an executive. He led a determined and interesting life. Never took anything for granted,” Chuck said. His family vacationed in spring at Jacksonville’s Beaches—he remembers his father saying one spring break, “I’ve found heaven here, and we’re going to move down there someday.”

Chuck agreed with this and was determined to head straight for Florida after graduating from business school. So, on October 21, 1972, he and Cami married in her family’s backyard, and the very next day they moved to Atlantic Beach.

Chuck was first introduced to JU as CSX’s chosen representative in response to a request by then JU president, Paul Tipton. Cami, however, had a prior connection to

Dr. Kinne. “Fran’s niece, Carolyn Kinne Wayland, was my best friend in elementary school,” said Cami. They formed a connection that she calls serendipitous, one that persists still today.

“One of the great things about working for a company like CSX that’s serious about serving the communities in which it operates is that its executives are encouraged to engage with community organizations,” said Chuck. “From my bosses John Snow, Pete Carpenter, and Michael Ward, I was given the opportunity to serve in a meaningful way, and I was thrilled to be involved with an organization as important to Jacksonville as JU.”

He and Cami credit the Davis, Stein, and Shircliff families, all major JU donors, for teaching them the value of philanthropy. “Jacksonville is so lucky to have individuals like these, and you can’t help but be inspired by the positive impact of their giving. We share their view that philanthropy done well is an investment with outsized returns.”

In his early days as a trustee, he said there was one fact about JU that always remained true—the University’s singular attention to students. But he said there was clearly room for improvement in other areas. “Back when I was president of the University Council, we completed a branding study that called JU a hidden gem.” Chuck said the phrase always bothered him because his vision and hope for the University have always been much larger. “There is no reason that JU shouldn’t be recognized as one of our country’s great private universities and we should all be proud to identify with it as current alumni, faculty, or in whatever capacity.”

Chuck served on the Board’s 2012 presidential search committee knowing that finding the right leadership was a necessary first step to JU realizing its full potential.  “A few of us—Ron Autrey ’01, John Harrison ’67, Fred Pruitt ’69/’85, Jack Keigwin—agreed that we needed to think outside the box and find someone with a business background to lead. That’s when Tim put his hat in the ring.”

Describing then-presidential candidate Tim Cost as a business-minded powerhouse among dozens of candidates from academia, Chuck recalls hours of thoughtful conversation and debate. He knew, as did the entire Board, that choosing a university president was essentially a choice about the future trajectory of the institution. “We looked at where his heart was, his skill sets, and his unbelievable energy. Then we met Stephanie, his secret weapon, and knew we couldn’t pass him up.”

In addition to providing leadership and investing his time and talent, Chuck also stood in the gap as a major financial supporter. Projects made possible because of commitments from the Wodehouse family and other donors include everything from fine arts programming to floating classrooms. 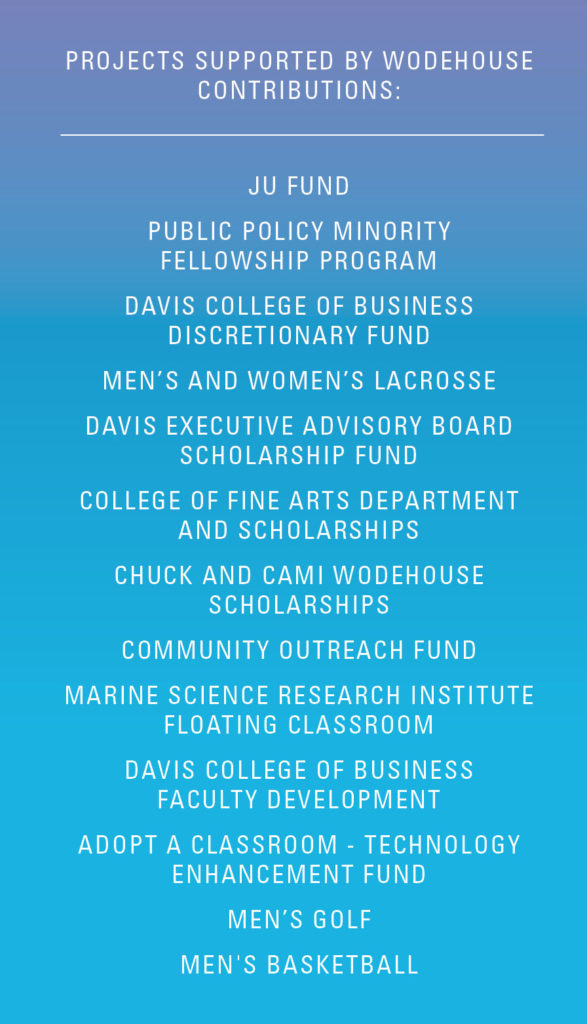 “It’s our feeling that JU is a great investment. I mean, if the University was a product in a business deal, I would invest in it hands down.” He said that, simply by looking at the facts—minimal risk and a terrific product—you can understand why surrounding markets cry out for it. “Every great city in the U.S. has a great, private university anchoring it, and Jacksonville has JU.”

The Where and How of Philanthopy

The logic behind knowing where and how to support? They describe it as an organic process.

“We see a need and know that we can do something about it,” Cami said. She uses lacrosse as an example. They remember Paul and Mindy McCord as early champions of Lacrosse at JU. This struck home for the Wodehouses. “I wasn’t a stellar lacrosse player in high school, but I knew the power of the game and how popular it had become,” Chuck said.

Chuck gives high praise to Coaches Mindy McCord and John Galloway, and agrees that Jacksonville University indeed has the potential to become the Lacrosse Capital of the South.

“It’s part of the secret sauce at JU. Our athletes are wonderful, have leadership skills, speak well in public, maintain high GPAs. These are the kind of graduates we seek,” Chuck said.

Jacksonville University Athletics has already broken ground on the Jacksonville Lacrosse Center (JLC), having reached the fundraising goal ahead of schedule. Completion is scheduled for this November with a dedication ceremony on the spring calendar.

Senior Vice President and Athletic Director Alex Ricker-Gilbert said, “It is so rewarding to see all of the hard work coming to fruition. We identified this as a priority when I first took on this role, and thanks to the overwhelming generosity from the JU Family, we were ecstatic about putting shovels in the ground this summer.”

The 8,600 sq. ft. building will serve as the new home for both the men’s and women’s lacrosse programs and is located adjacent to the grandstand on the north end of D.B. Milne Field. The $1.875 million facility will include everything from locker rooms, media areas, and lounges to coaches offices, training areas, and the outdoor gathering space that has been dubbed The Wodehouse Walk.

The goal of the Fellowship is to offer future African-American leaders a two-year JU Master of Public Policy scholarship, a City of Jacksonville internship, and job placement after graduation that keeps their leadership and talent within the region. “This is a very attractive program,” Chuck said, and he looks forward to the 2018/2019 inaugural year.

In a conversation one afternoon with Rev. Mark Griffin, a dear friend of the Wodehouse family and former colleague at CSX, Chuck asked, “How do we clone you?” They had been discussing leadership issues. With past experience as a CPA and clergyman, he later founded a charter school in Eureka Gardens located inside Jacksonville’s urban corridor. Mark shared the opinion that leadership problems within Jacksonville’s African-American community centered around retaining talent.

“I wanted to know how to keep bright, young leaders from relocating to Charlotte, Miami, and Atlanta,” Chuck said.

Soon, the conversation turned to the Public Policy Institute. The unique concept involved affording the most talented African-American graduate students a chance to earn a prestigious degree and gain broad exposure to national, regional, and local public policy issues. Preparing these students to lead while creating diverse employment opportunities in the public, private, and non-profit sectors perfectly fit what Chuck and Mark envisioned.

The Fellowship provides two full-tuition scholarships per year, worth a total of $40,000, to qualified minority applicants. Recent graduates from JU, the University of Florida, Florida State University, Florida A&M University, and other schools in the region were encouraged to apply. This inaugural year, 20 applicants competed for the two fully-funded seats.

Chuck said, “Out of these applicants, we had students from nursing, information technology, political science, law, and other disciplines. It was an eclectic group, and that’s great because we look for well-rounded people.”

By the last week of June, the Fellows selected Tameka Gaines Holly and Javon Knight.

“Think about it: young people entering into this program can look up and say, ‘I can be that.’ This program will do nothing less than accentuate our city, and keep our best and brightest home,” Glover said. President Cost called the program “a stellar example of a real partnership of impact,” and Mayor Curry dubbed it “a double-down commitment for the future.”

Chuck simply said, “I don’t think people yet appreciate what this University can and will do.”

The Real Name of the Game

Chuck says that during the last five years of his 18-year service to the Board, he realized that he didn’t know the students. Not really, and not personally. “Linda Stein and I set the pace for named scholarships, and we hoped to build momentum. To inspire people. The best part, of course, is gaining that student connection. That’s big.”

Both Chuck and Cami believe that giving to buildings is wonderful. People giving support to programs, they agree, is also great. But when you give to students, that equals a one-on-one relationship. He said, “I would rather have a relationship that lasts the rest of our lives than anything else. The ultimate reward for us is to see our scholarship recipients succeed.”

When asked about their joint vision for the future of JU, Chuck and Cami list endowments, increased enrollment, and a further diversified student profile. They acknowledge there is room for growth and improvement, but are quick to remind everyone of that special brand of JU potential. They also acknowledge that, at the end of the day, it takes funding. Opportunities start with funding, Chuck says.

“Here’s what I want—when people think of Florida, the next thought in their minds is Jacksonville University, where they have that great program in aviation, speech pathology, public policy, etc.”