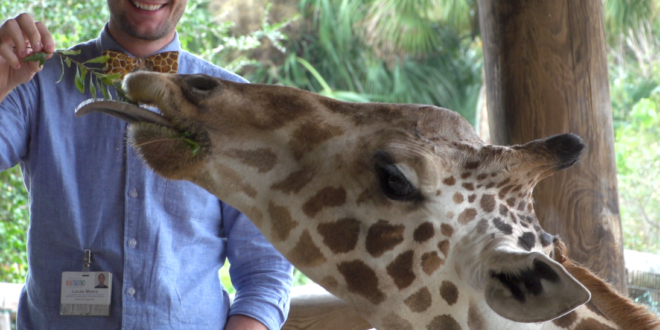 Faraja enjoys some tasty wax myrtle leaves from JU biology alumnus Lucas Meers of the Jacksonville Zoo in the video "Giraffes... Four Species or One?" The educational video is part of JU's "Science of..." series.

What kinds of secrets are giraffes hiding in their DNA? What do they eat at the Jacksonville Zoo and Gardens? And just who is Duke the Giraffe, anyway?

The most recent giraffe videos from the latest installment of “The Science Of…” educational series produced by Jacksonville University answer those questions and more – with a special appearance by the worldwide head of the Giraffe Conservation Foundation.

They also engage viewers with some quirky local giraffes up close and personal. In addition to Duke, local father of 16 giraffes, viewers can meet Faraja as she enjoys munching on wax myrtle leaves, as well as other members of the herd, such as Spock and youngsters Forrest and Fiji, Duke’s two most recent offspring.

“The Science Of…” is a new online science and nature video magazine produced by JU in collaboration with the Jacksonville Zoo and Gardens. “The Science Of…,” which launched last fall, has produced videos on sea turtle conservation (at the Beaches), dinosaurs (at the Museum of Science and History), the St. Johns River (at JU’s Marine Science Research Institute), and now, giraffe conservation (at the Jacksonville Zoo and Gardens).

“Science and nature is all around us, and we aim to highlight what is here in our own backyard as well as connections Northeast Florida has with scientists and organizations outside of the area.” said Dr. Anthony Ouellette, JU Professor of Biology, who is the program director. “Some of our stories explain science, some of our stories highlight the people and activities in the region, and all of our stories have a local connection.”

Ouellette’s hope is to build a resource of interesting videos that will be viewed by a wide range of people, and used by teachers to connect learning with local nature, local activities, local research and local people in an engaging way.

So far, they’re a hit in classrooms and with experts. Stephanie Fennessy, a co-director of the Giraffe Conservation Foundation, which has posted a “Science Of…” video about giraffe genetics on its website, notified the Jacksonville Zoo that the video was “awesome!”

“Really well done and easy to understand why these results actually are important,” she said by email. “I would love to use it in some of our presentations, post a link on Facebook and our website. Such a great educational tool.”

Likewise, at the St. Johns Riverkeeper website, you can find “The Science Of…” videos on microplastics and algal blooms, which are used to highlight these problems and local efforts to understand and bring awareness to these issues.

Students in JU alumnus Chris Williams’ AP Biology and Environmental Science classes at St. Joseph Academy Catholic High School in St. Augustine have watched a number of the videos and give them high marks for being interesting and entertaining.

Student Nayeli Jimenez liked the downloadable companion guides accompanying the giraffe videos and recommended having a “Science Of …” video as an assignment every week to learn about different species.

“I thought that this guide was very informative because I did not know that giraffes have four stomachs like cows. I also didn’t know that male giraffes at the Jacksonville Zoo and Gardens had to be transported to a different zoo once they reach maturity,” she wrote in a class evaluation of the video. “This guide was also very interesting because it talked a lot about their diet, reproduction and how to make them feel at home.”

Williams said the videos have the possibility of connecting his students to the bigger picture of the planet’s fragile condition.

“The world is currently in the midst of a major extinction event … and no one other than scientists really knows it,” he said by email. “Videos such as that developed by Jacksonville University and Dr. Ouellette may go a long way in assisting teachers and helping students in learning and better understanding current environmental problems, and get those same students involved in STEM activities. Students are not apathetic, they are uninformed.”

The origins of the video series date back to an appearance Ouellette made on the local television talk show The Chat to talk about germs. He got to thinking about non-scientists in Jacksonville and wanted to do something to help bring some science to the community in an easily digestible, interesting format.

“I realized that I was reaching an audience that I normally wouldn’t,’’ he said. “I really got to thinking about that audience, and wanted to find a way to expose more locals to what goes on in science, nature and technology; the people, the activities, and the research that is going that I think is underappreciated.”

For example, on just one four-mile stretch of Ponte Vedra Beach, more than 7,700 baby sea turtles hatched in one season.

“Amazing, and when you tally up all of the baby sea turtles each year from the sandy beaches across Northeast Florida, you start to realize how important our beaches are for loggerhead turtles.  Truly astounding,” Ouellette said.

You can see volunteers rescue some of these baby sea turtles and release them into the ocean in the feature video “Sea Turtles… Threats and Solutions.”

While the focus is local, the reach is global. The videos have begun gaining traction, with more than 3,000 views over the first six months, from more than 40 countries.

“The fact that people around the world are finding and watching our videos is great.  We want people to learn, and to have an appreciation for what goes on in Northeast Florida.” Ouellette said.  “And, we are just getting started.”

“The videos were shown in my aquaculture classes. The students were in awe to actually know a ‘real’ scientist,” Sullivan said.

Dr. Simmons has worked directly with Sullivan’s students in their visits to the JU Marine Science Research Institute, and the videos were useful in providing students a connection between their research methods on plankton and Dr. Simmons’, which was on a much larger scale.

“The Science Of…” is a collaboration that includes JU faculty from science, art and music, with original music by faculty member Tony Steve, animations by Professors Eric Kunzendorf and David Smith, and videography and editing by Ouellette and JU Media Services Manager Greg Minton.

Jacksonville Zoo and Gardens Conservation Program Officer Lucas Meers, a 2012 JU alumnus, is the lead for the conservation series, and Dr. Lee Ann Clements, Associate Provost, will be the lead for an art series, with science of glassblowing videos to come out later this year. Funding has come from JU’s Florida EPIC (Entrepreneurism, Policy, Innovation and Commerce) Program.

Jody Palmer, Director of Conservation at the Brevard Zoo in Melbourne, Fla., which has a sea turtle hospital, said she’s excited by what she’s seeing in the four-part sea turtle video series.

She called them “a wonderful adventure through the life and threats of one of Florida’s many gems, the sea turtle. Lucas Meers serves as an ideal guide on this incredible beachfront journey of ‘Sea Turtles…Threats and Solutions.’”

In that same video, another student at St. Joseph Academy, Cassandra Johnson, learned about how important it is to use turtle safe lights at the beaches.

“I actually really enjoyed how they explained how we were able to help the problem of dying turtles and think they should make it more public to use the ultra-red lights to not distract baby sea turtles,” she wrote in her evaluation.

As for the videos on giraffes, 2016 may prove to be a pivotal year for the animals. At the close of the year, the International Union for Conservation of Nature listed giraffes as vulnerable to extinction because of rapid losses of wild populations. This comes hot on the heels of DNA research that proposes that African giraffe populations are so different from each other that there are actually four distinct species of giraffe instead of just one, which is how scientists currently classify them. On top of that, the first genome sequence of a giraffe was published earlier in the year.

When Ouellette learned about how DNA analysis concluded that there are four species of giraffes, and what it means for giraffe conservation, he decided that people in Jacksonville needed to know.

“Last September when I read the new DNA research that shows that giraffes are genetically different to the point that there might actually be four distinct species, I immediately contacted Lucas to see about tying in the giraffe herd at the Jacksonville Zoo and Gardens,” he said.

In addition to the videos being housed at The Science Of… website, which also has companion guides and transcripts for the videos, they are also available through The Science Of… YouTube channel and the Zoo’s website, and are being broadcast on monitors throughout the Zoo.

“The recent listing of giraffes as ‘vulnerable’ by the IUCN means the need for zoos and the education of their guests is more important than ever,” said Meers. “Educating and inspiring guests to take action and protect these animals is at the forefront of what we’re doing, and the close collaboration between the Zoo and JU makes that outreach to the community so much easier.”

Steve, JU faculty member and Artist-In-Residence of Contemporary & World Music, channeled an African theme as he created and performed the music for the giraffe videos in his home studio, while Anthony Akapnitis, a music major graduating this spring, recorded it. During the credits of “Duke and his Family Tree,” viewers even get a glimpse of Steve playing the udu, an instrument that originated in Nigeria, a country where Northern giraffes have sadly gone extinct.

All of the conservation videos will have downloadable companion guides, which can be used to delve deeper into the topics and help teachers design lesson plans. All videos have downloadable transcripts and are closed-captioned in English and Spanish.

An abbreviated version of this article appeared in The Florida Times-Union on March 20, 2017.

For more on “The Science Of …,” visit http://thescienceof.ju.edu.