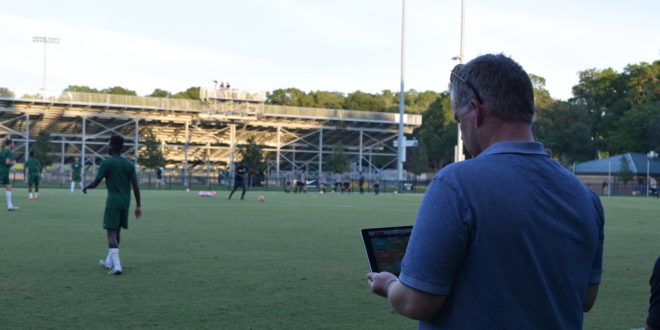 Science on the sidelines with groundbreaking heart study

At least three Jacksonville University athletic teams will be taking part in a groundbreaking study that will bring science to the sidelines.

The study not only will help JU athletes train better, but make better decisions in competition all while supporting the ability of the coaches to make personnel  decisions based on energy expenditure, fatigue, and ability to recover.

The study, in conjunction with faculty at the Brooks Rehabilitation College of Healthcare Sciences, will involve both the men’s and women’s soccer teams along with softball for an initial three-week tryout of a cutting edge wearable technology, according to new Assistant Professor of Kinesiology Dr. Derek Mann. Under the current arrangement, Polar Team Pro is sharing a system with the school. If successful, Mann will look at purchasing a system that will be in part funded by the Athletic Department and the Kinesiology Department.

“There is a science behind elite level performance, and coaches want to leverage the science. The application of wearable technology that combines GPS, motion tracking technology along with heart monitoring allows coaches and trainers to know where their athletes are in terms of their training zone and adjust their strategy accordingly,’’ Mann said. “Knowing if an athlete is over-training or approaching burnout can not only help prevent injury but coaches can make better tactical and personnel decisions.”

The Polar Team Pro tracking system (a fitness tracking company), is equipped with a non-invasive chest strap complete with a global positioning system (approved by the NCAA for use in competition) and provides real-time tracking insight into the distance an athlete has covered, the amount of time spent in their optimal training zone and how much time is needed for the athlete to recover.

“There’s a natural interest from the athletic department because we want to minimize risk to the athlete and maximize performance,’’ Mann said.

In addition, and key to the study, Mann and his colleagues will be looking at the relationship between Heart Rate Variability (HRV) in sport to decision making. The heart rate variability is the time between peak heartbeats.

“When monitoring heart rate, it’s one thing to look at average beats per minute, as heart rate goes up, we know energy expenditure goes up,’’ Mann said. “We also are interested in the mind-body relationship. That is, the relationship that mind-set and stress have on performance. HRV has been shown to be responsive to the mind-set of individual when making a decision.

“When we have a higher baseline resting heartrate variability it’s like a fine-tuned race car,’’ he said. “When they have a low variability you find that mental agility and responsiveness, is compromised.’’

One of the key end results will be to ascertain proper self-regulation strategies for each athlete. 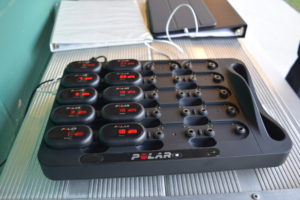 “If our hypothesis is supported, the best case scenario is we can teach very specific psychological strategies; relaxation, excitation or a cognitive focus strategy to ensure that at various points in the game the athlete can be at his or her very best,’’ Mann said. “One thing we will look at with soccer is set plays (corner kicks, free kicks). Generally speaking, coaches will have a specific play they want to run off a set piece which provides a nice time window for capturing and analyzing in game HRV that coincides with mindset and performance. Depending on how the athletes perceive the situation they might have a very different emotional reactions that will influence their decision making.’’

Mann said the concept of heart rate variability isn’t new but bringing it to active sport is.

“For us, it’s about trying to understand the mind-body connection while performing under pressure. Looking at HRV and decision-making in a competitive game hasn’t happened,’’ he said. “We’ve seen it in controlled cognitive studies but not in sport.’’

Men’s soccer coach Mauricio Ruiz is ecstatic to be involved as his team used the monitors in its recent 2-1, double overtime win over Lipscomb.

“It’s encouraging that the athletic department and the Kinesiology Department are working in unison,’’ Ruiz said. “Everyone feels the importance of using this information. This study puts us up with the competition. People are using it to assist with the health and injury benefit of their players which ultimately becomes athlete welfare.’’

Ruiz particularly likes that training can be individualized.

“Each athlete is built differently, their muscle structure, lungs, recovery,’’ Ruiz said, “we will be able individualize the way we address the athlete. This information is crucial in how we maximize individual performance. It is tangible information and you can use it live.’’