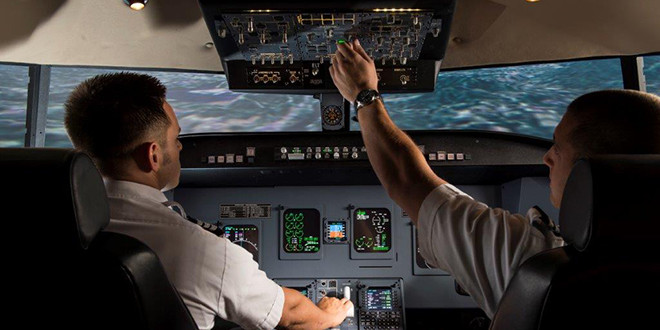 IMPORTANT UPDATE SINCE THIS STORY WAS FIRST FILED: Originally, graduates of the JU School of Aviation beginning last year could be eligible for the Restricted Air Transport Pilot Certificate (R-ATP) with 1,000 hours of flight time. This did not cover students who took Instrument and Commercial ground school under Aerosim’s 141 certificate. However, JU petitioned the FAA to include those students, and the FAA has now granted that petition. This means those who graduated between 2013-2017 or will graduate from 2017-2019 are all exempt. These students and alumni should learn more details by setting up an appointment with Assistant Professor of Aeronautics Chad Kendall at ckendal@ju.edu.

After an almost three-year process, the School of Aviation has received authorization from the Federal Aviation Administration (FAA) to critically help pilots in one of the most important rulings to ever impact the program.

The FAA will now authorize JU aviation graduates to be eligible for the Restricted Air Transport Pilot Certificate (R-ATP) with 1,000 hours of flight time versus the traditional requirement of 1,500 hours. The certificate allows a pilot to serve as a co-pilot until he or she obtains the necessary 1,500 for the Air Transport Pilot certificate. With the ruling, the aviation program joins approximately 80 elite programs at colleges and universities throughout the nation authorized to offer the R-ATP.

The legislation establishing the requirement that both pilots hold an ATP came as a result of a fatal air crash in Buffalo, N.Y. in 2009.

“Out of that accident came legislation that said to fly for an airline owned by a company in the United States both seats have to have an ATP,’’ Capt. Matt Tuohy, director of the School of Aviation, said. “The concession they made is the person in the right seat (co-pilot) could have a Restricted ATP which you can get earlier than 1,500 hours. If you’re a graduate of an approved four-year program that incorporates 60 hours of approved curriculum, you can get that at 1,000 hours.’’

Nearly three years ago the school applied for the authorization but was turned down due to a technicality in the rules.

Consequently, assistant professor Chad Kendall authored a petition for an exemption from that rule and he and assistant professor Alix Melchionna began the effort required to get an air agency certificate for ground school which would enable receipt of a restricted ATP authorization. Their efforts to submit for JU’s own ground certification resulted in a successful FAA visit and issuance of the certificate for the school.

JU then withdrew its long-standing exemption petition and within a week and a half was authorized to award a Restricted ATP for all the students moving forward. The authorization affects all students who began this semester and the school now is petitioning to grandfather in students who began study three to four years ago and remain here, as well as recent graduates.

“This is one of the biggest things we’ve done in the history of our program,’’ Kendall said. “What happened with that crash in 2009 changed the way people became airline pilots in the United States. It affected everybody.’’

“It’s another independent verification to the quality of our program,’’ Tuohy said, and he added the authorization should attract more students. “You never know who doesn’t call you, they want that 500 hours, and of those students who decided not to come, a majority felt it was because there was no restricted ATP. We think this will be a significant uptick in our ability to recruit students.’’

Another benefit is the JU program now has leveled the playing field with other college-based aviation programs. JU is independently accredited by Aviation Accreditation Board International, a program specific accrediting body, and was one of only two ABBI accredited programs not having the Restricted ATP authorization.

“Students want to get to the airlines as quickly as possible because in the airline world seniority is everything,’’ Kendall said. “How long you stay with the company equates to how much pay you will get, where you’re based out of, what type airplanes you fly; it’s seniority based. Coming out of a collegiate aviation program and being able to build hours quickly, or in this case get a 500 hour reduction, equates to about two years in the airlines.’’