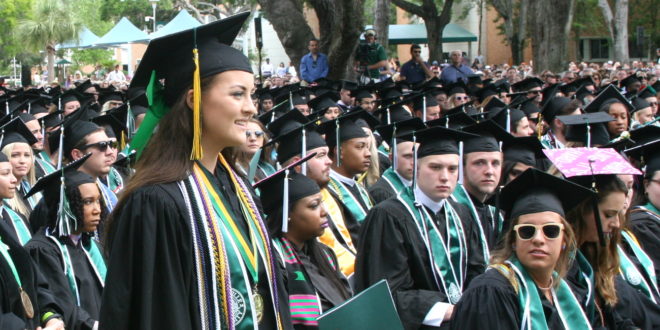 She won Jacksonville University’s top mathematics scholarship in 2015, was named its Woman Student of the Year in 2016 and earned its highest academic honor in 2017. Now spring graduate Savannah Bates has gone national, winning the prestigious Phi Kappa Phi Fellowship to pursue her Ph.D.

Only about 50 students from the honor society’s hundreds of chapters win the $5,000 award annually to support their first year of graduate or professional study.

Bates will use the funding this fall as she studies biomathematics at North Carolina State University, where this summer she is already doing HIV modeling research under Dr. Ruian Ke, who specializes in viral dynamics and mathematical theory.

The award is especially meaningful to Bates, in light of the obstacles her family has faced with the severe disability of her brother DJ. He was not expected to survive after being born with twin-to-twin transfusion syndrome (TTTS), which resulted in the stillbirth of his twin and his own massive brain damage.

“I knew starting undergrad that my mother would do her best to support me, but that there was very little money saved up for college,” Bates said. “My parents did plan for college, but that money had to go toward securing a bright future for DJ. So, I realize how truly blessed I am that God has provided for my education.”

“We hope that studying this mathematical system will shed light on strategies for a cure for HIV. There are a lot of studies currently happening that seem very promising. I am hopeful that a cure for HIV will be found in my lifetime,” she said.

Dr. Ke said that when considering new employees for summer work in his lab, he was impressed with Bates’ keen interests in doing research in infectious diseases, and that she stood out as a clear thinker and independent and mature individual.

“I’ve been surprised how quickly she learns new mathematical techniques and biology/immunology. She always prepare her presentations to me and the group in an absolutely professional way,” he said. “She works on understanding the mechanisms of certain drugs that can achieve post-treatment control, a first step toward curing HIV. This is an exciting area to do research, as well as an important issue for society.”

According to The Honor Society of Phi Kappa Phi, “The selection process for a Phi Kappa Phi Fellowship is based on the applicant’s evidence of graduate potential, undergraduate academic achievement, service and leadership experience, letters of recommendation, personal statement of educational perspective and career goals, and acceptance in an approved graduate or professional program.”

At Jacksonville University, Bates received a bachelor’s degree in mathematics, earning a 4.0 GPA. She was a top undergraduate researcher and won the Fred B. Noble Gold Medal for Scholarship, the University’s highest academic award, given to graduating seniors with the highest cumulative GPA.

Phi Kappa Phi is the nation’s oldest, most selective and most prestigious all-discipline honor society. Membership is by invitation only to JU’s top 7.5 percent of second-term juniors and top 10 percent of seniors and graduate students.