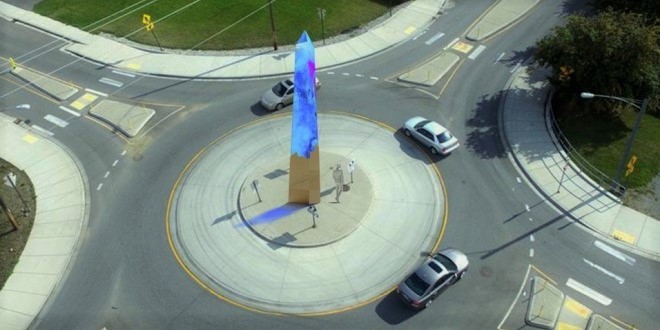 Jacksonville University and the Cultural Council of Greater Jacksonville have chosen internationally renowned artist Shan Shan Sheng of San Francisco to create the large-scale artwork for the new “turbo” roundabout scheduled for construction at the University’s main entrance.

The City of Jacksonville is tentatively scheduled to begin construction in January 2020 on the “turbo” roundabout at the intersection of University Boulevard and Merrill Road as part of the Arlington Community Redevelopment Area (CRA). The roundabout, developed as part of the JTA Mobility Works initiative, is designed to reduce speeds and improve traffic safety at the intersection. Construction is expected to last between 9-12 months.

Ms. Sheng’s signature uses of glass and LED lighting with embossed images honoring the stories of the communities who built the city, combine to create an iconic and unique work—a piece at once timeless and forward-looking—a monumental work of public art that will stand for generations as a love letter to the community of Arlington, according to the selection committee.

The primary goal of this public art piece is to serve as a landmark for the Arlington neighborhood.

The selection committee chose Ms. Sheng after a national request for qualifications resulted in nearly 40 proposals from artists and artist teams throughout the United States. Ms. Sheng, who proposed a piece that takes the ancient obelisk as its form, will design, fabricate and install the large-scale, dynamic, site-specific artwork for the newly constructed roundabout.

With artworks installed in four of the world’s tallest buildings and several major centers of education and civic engagement, Ms. Sheng is an artist of great accomplishment. From the city where she was born, Shanghai, to an American city known for its architecture, Chicago, to the bicultural city of Hong Kong, Ms. Sheng is an artist whose universal messages resonate anywhere in the world.  A graduate of Mount Holyoke College and the University of Massachusetts at Amherst, where she earned her Master of Fine Arts Degree, Ms. Sheng continued to Harvard University as an artist-in-residence for two years. She now lives and maintains a studio in San Francisco.

She has held more than 30 one-woman shows in Europe, Asia and America. Most recently, her “Open Wall” project was included in the 53rd Venice Biennale as part of an exhibition organized by the International Association of Art, UNESCO, Italian Committee. In 2010, the Open Wall project was exhibited at the theme pavilion Urban Footprint in the Shanghai World Expo, organized by the Shanghai Museum and traveled to Museum Kampa Prague for a 6-month exhibition.