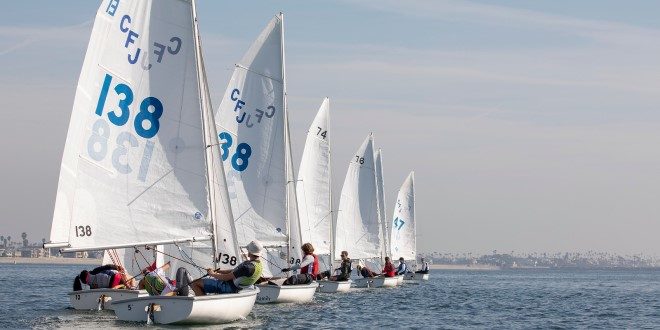 The Jacksonville University sailing team finished sixth out of 20 college teams at the recently concluded 55th annual Rose Bowl Regatta at the US Sailing Center in Long Beach, Calif.

Dolphins sailors finished ahead of several nationally ranked teams, including the US Coast Guard, Boston University, and Tufts.

“The Rose Bowl Regatta is the biggest regatta with the toughest competition on the West Coast,” said Sailing Head Coach Jon Faudree. “It’s a mix of top 20 teams that we see a lot of and west coast teams that we only see at this regatta.”

Telmo Basterra ’22 and Grace Benzal ’23 competed in A Division. In B Division, Andre Guaragna ’20 sailed with Caroline Bourgeois ’22 on the contest’s first day and Logan Brickhouse ’22 on the second day.

“We were able to try some new skipper crew combinations, as well as take sophomore transfer Logan Brickhouse to her first big regatta. She was a walk-on in September and has quickly shown she is a natural,” Coach Faudree said.

This is the third trip Jacksonville has taken to the Rose Bowl Regatta, which is hosted by The University of Southern California (USC) sailing team and U.S. Sailing Center (Pacific Coast Sailing Foundation). As many as 90 high school teams and 30 college squads typically compete in the event, which includes a college sailing forum.

“We want to continue to make this trip every year as it’s a big regatta and, most importantly, it’s a recruiting opportunity,” Coach Faudree said. “There is a huge concentration of talented young sailors in that area and the college regatta is run in conjunction with the largest High School Regatta of the year.

“It’s a chance for us to expose Jacksonville University to hundreds of up and coming athletes.”

You can support waterfront programs

If you’d like to help support the Jacksonville University sailing team or other waterfront programs, including rowing, the Marine Science Research Institute, and OCEARCH, consider joining us for the JU Waterfront Celebration on March 6-7.

At Rock the Docks on March 6, you can enjoy an evening of drinks, dining, and dancing to live music as we overlook the St. Johns and celebrate our signature waterfront programs.