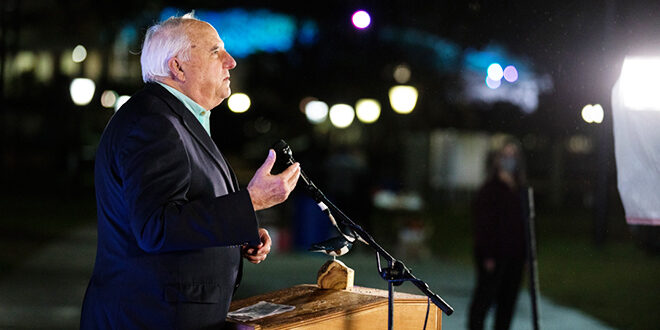 Congratulations to Quinton White Jr. for being selected as the first recipient of the Dr. A. Quinton White Jr. For the River Award named in his honor. The award was created by the St. Johns RIVERKEEPER organization to recognize select individuals who have made substantial contributions to the St. Johns River and whose actions have led to a more informed, educated and engaged constituency for the river.

According to RIVERKEEPER representative Lisa Rinaman, this award was meant for White from the very beginning. “After recently celebrating our 20th Anniversary, we decided it was time to honor and recognize those truly special people who have dedicated their lives to the protection and restoration of the St. Johns,” she explained. “Well, needless to say, it didn’t take us long to decide who the award should be named after and who should receive the first one.

As a professor of biology and the executive director of the Marine Science Research Institute at Jacksonville University, White is highly regarded as an educator, researcher, leader and one of the foremost experts on the St. Johns. Because of his leadership and vision, JU was able to establish the MSRI in 2010, a premier biological and environmental research and education facility located on the banks of the St. Johns. White also helped to establish the annual Lower St. Johns River Basin State of the River Report that has informed policymakers and the public about the health status of the river for the last 13 years.

“I am extremely grateful to the entire St. Johns Riverkeeper organization for the recognition,” White said. “I am fortunate to have spent my life doing what I love. It is very humbling to have an award named in your honor.”

Since his arrival at JU in 1976, White has been a champion for the St. Johns River and a highly respected leader in the community. Over the years, he has served in numerous leadership positions and on numerous nonprofit boards, including the Museum of Science and History, Tree Hill Nature Center and Leadership Jacksonville. He is also a founding board member of the St. Johns RIVERKEEPER organization. In addition, White has been a trusted advisor and expert consultant for elected officials, agency staff and appointed bodies, such as the Jacksonville Waterways Commission.

“If anyone has ever been deserving of the first Dr. A. Quinton White, Jr. For the River Award, it is Dr. White himself,” proclaims Jimmy Orth, St. Johns RIVERKEEPER executive director. “Quint has dedicated his life to the St. Johns and has truly made a profound impact on this community. Our river is much better off today because of him and, certainly, so is the St. Johns RIVERKEEPER organization.”