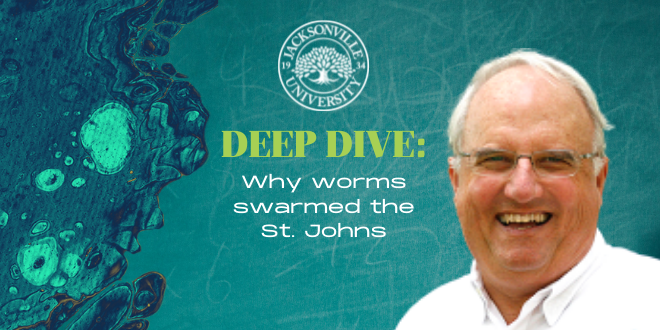 Worms. Who knew that worms could create such a discussion when they suddenly appeared in the St. Johns River last month. But that was the case a few weeks ago, when my friend Jeff Lageman, former Jaguar outstanding defensive end and currently host of the Outdoor Show on a local radio station, sent me pictures of worms swimming in the river. Turns out the swarm of worms had coincided with a local sheepshead tournament and the fish weren’t biting. They were full of worms.

Jeff wanted me to appear on his show and talk about the worms. Happy to help and it’s always fun to go on the show to talk about the river, the ocean, hunting or fishing. We do this several times a year. The discussions can get very interesting when we start mixing some of the science behind what people are seeing on the river.

Back to the worms. You might remember from your high school biology class that there are several kinds of worms. Among the more common are what are called segmented worms, like the earthworms you find in your yard, or the blood worms you use to fish. Leeches also belong to the same phylum called Annelida.

The worms in question are called polychaeta, which means “many hairs or feet.” They are a very common species found in the sediment of the river and ocean. Worms are an important part of the food web too. They come in a variety of shapes, sizes and habitats. Some burrow into the mud while some just crawl through the sediment. They can build calcified tubes that form worm reefs along the Florida coasts near Stuart. You might see the worm tubes on rocks or driftwood, or maybe you have seen pictures of the beautiful and delicate feather duster worms on a coral reef. All of these are polychaetes.

And when it comes time to reproduce, different species of worms can do so in a variety of ways. In this case, the males and females modify part of their bodies to contain eggs or sperm that break off and swim to the surface. This is what people fishing have observed. Sometimes these worm-like segments appear to have grown a new head, sometimes not. They swarm and release their eggs and sperms, fertilization occurs, and millions of new worm larvae are hatched. These microscopic organisms also become part of the food web. Most of them will be eaten by filter feeders in the river. It takes million and millions of larval worms for a few to live to be adults.

The worm swarms or spawns are an annual occurrence. They occur more often at night and can frequently be seen around the lights on a dock. We even name the full moon in March, the Worm Moon. These full moon names are associated with other seasonal changes we observed. Many are aware of the Harvest Moon of September, or the October Hunter’s Moon. My personal favorite is the Buck Moon in July which gets its name from the emerging of new antlers on male deer that month.

In some species, the female worm segments will produce a little light, or bioluminescence, to attract the males. We call these “fire worms” and there is even speculation that Columbus saw the light of these worms as he approached the Bahamas in 1492.

Who knew worms could be so interesting?

Are there sharks in the St. Johns River? Yes, but you do not need to worry about being bitten. They are mostly small and relatively harmless. Occasionally some larger sharks will wander into the river, but their physiology needs salt water. They cannot spend much time in fresher river water.