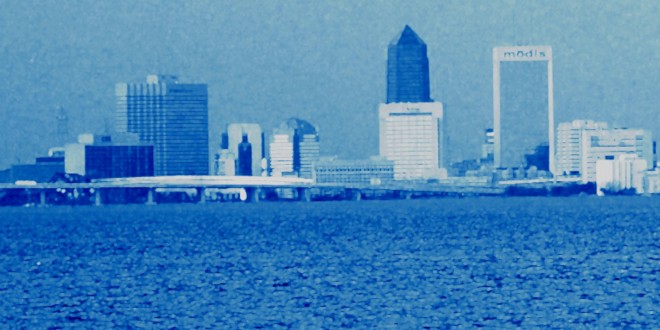 RIVER LIFE: What’s that silver ripple in the St. Johns?

One huge benefit of having the Marine Science Research Institute at Jacksonville University is its waterfront location right on the St. Johns River. I get to watch and observe the river on a daily basis. I am spoiled and readily admit it. The river offers a constant array of changes, variations and combinations. You never quite know what to expect next.

While giving an exam one day, I was quietly summoned to the door. A friend had walked down the hall, was looking at the river and had a question: What is that mass of rippling waters moving slowly downstream?

A large school of small silver menhaden was stirring the river waters as they gradually progressed toward the mouth of the river. Menhaden are a common inhabitant of the southeastern estuaries. They are not typically eaten today, but were once prized for their buttery texture. Today, they are harvested for their oily flesh that is ground and processed into fish oil and fish meal to be used for fertilizer. The fish oil is refined into the popular omega-3 food additive. It is thought that Native Americans probably used menhaden as fertilizer and may have taught early settlers to put the fish in each hole as they planted various seeds.

Menhaden, also known as pogies or fatbacks, are popular bait when fishing offshore for larger species. Pogies have a habit of flipping at the surface, which appears as a flash of silver on the water. A common sight off Jacksonville’s beaches on summer mornings is boats with people standing on the bow and cast-netting for menhaden to be used for bait. Fishermen (and women) will run along the beaches looking for the flash of silver, or birds feeding on the schools of pogies just beyond the surf.

Menhaden are filter feeders and remove both phytoplankton (plant) as well as zooplankton (animal) from the water, especially near the surface. Large schools of menhaden can be observed on the surface during much of the year.

There used to be a large number of menhaden processing plants along the Southeast coast. One in Fernandina Beach closed many years ago. The once-profitable business was a victim of its own success. Large schools of menhaden would be caught and processed. The industry eventually used planes to fly and direct the trawlers to the huge schools, essentially overfishing them, and the plant closed.

Regretfully, we have the technology today to overfish most species.

Menhaden, like many estuarine species, have a complex life cycle. They spawn or release their eggs offshore, and the larvae develop quickly. These small fish then make their way back into the estuary to grow and develop for about a year.

Estuaries — areas where freshwaters and ocean water mix — are critical habitat for about 95 percent of our commercially important marine species. Shrimp, oysters, crabs and many fish species use this area as a nursery ground. That is one of many reasons to protect the St. Johns River.

Why are they called “shrimp runs” or “mullet runs”?

When fish or shrimp that have used the estuary as their nursery have grown large enough to migrate offshore to reproduce, they move almost en masse. So early settlers along the coast called them “runs.” They seemed to know that the animals were moving, running, somewhere. It was only later that scientist determined why they were moving.